Though Oct. 17 was just seven months ago chronologically, it feels like seven years emotionally with all of the social, political and economic chaos and strife in this current era of Covid-19.

Year of the bird: Killdeer nest prompts planning shuffle for Greening Up The Mountains

Every year, Sylva’s population quadruples on the last Saturday in April as more than 10,000 people flock to the tiny town for Greening Up the Mountains, a long-running festival featuring live music on two stages, a 5K run and more than 125 vendors offering crafts, food and information about local nonprofits.

Planning the event is a year-round endeavor for town staff, and as this year’s April 27 date drew closer, all the ducks seemed to be sorting themselves into their respective rows — until a different kind of bird threw a wrench in the plans.

Greening Up the Mountains 2018

The 21st annual Greening Up the Mountains Festival is Saturday, April 28, in downtown Sylva. The festival includes more than 200 vendors who will be spread throughout two locations — on Main Street and Railroad Avenue.

A closer look at festivals in Western North Carolina

The proud communities that make up Western North Carolina were once mountain towns that played host to several successful blue-collar industries. We’re talking about logging, furniture, paper products, auto parts, beverages, textiles, and so on. The country needed things, and needed them fast, and folks here made those products with their bare hands.

These companies found a crucial, much-needed balance alongside the serene beauty and endless natural resources of our forests, rivers and wildlife.

Take it all in: The art of Positive Mental Attitude (PMA)

It’s about finding your center.

Though they’re hundreds of miles from the closest ocean, the members of Sylva-based Positive Mental Attitude (PMA) have concocted a formula of reggae soul unique to the mountains of Western North Carolina. It’s more about an uplifting and relaxed state of mind rather than actual sandy toes and salt water.

Greening Up The Mountains welcomes spring 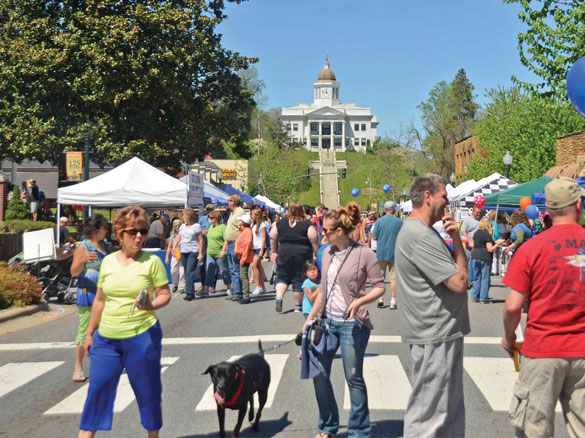 Drawing thousands of visitors each year, the 19th annual Greening Up The Mountains Spring Festival will be held from 10 a.m. to 5 p.m. Saturday, April 23, in downtown Sylva.

The daylong event is a celebration of renewal, of revitalization, and a time of reconnecting with friends, relatives and neighbors. Browse the more than 190 vendors, representing arts, crafts, demonstrators, culinary delights, local schools, business, community, environmental, health, safety, children’s activities, and more. 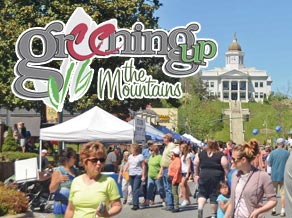 The 18th annual Greening Up the Mountains spring kickoff street festival will be held Saturday, April 25, from 9 a.m. to 4 p.m. in downtown Sylva.

The third annual Beer Garden will return to McGuire Gardens with craft beer offerings from Heinzelmannchen and Innovation breweries. The two businesses will also release a Heinz-Syl-Vation Collaboration Ale (blackberry spring wheat ale). Live music at the garden will include Alma Russ, Ian Moore and Dr. Pockets. Entry to the garden is $5, with craft beer and prepackaged treats from the Evolution Wine Kitchen sold separately.

Spring up at Greening Up

This free festival celebrates spring in the mountains, when the greening leaves work their way up the Great Smoky Mountains. It also celebrates the greening of the environment, with info about sustainable living and presentations by environmental groups.

SEE ALSO: Aiming for the soul, one note at a time

Most things in life start out small — acorns grow into oak trees, babies are reared into adulthood, small patches of green spread until they eventually cover the mountains each spring.

The latter is the focus of Jackson County’s annual festival Greening Up the Mountains, an event that has seen a lot of growth itself.

What started as a small Earth Day event has now grown to the largest festival in Jackson County. Attendance at the former mostly locals event has swelled to 10,000 to 12,000 each year during its 15-year existence.

The Greening Up the Mountains festival will be held from 10 a.m. to 4 p.m. on April 28 on Main and Mill Streets in historic downtown Sylva. The Downtown Sylva Association organizes the event, which celebrates the local economy, sustainability and traditional heritage crafts.

More than 200 vendors from all over the county — nonprofits, for-profits and others groups — will set up along the two streets, handing out pamphlets of information and peddling their handmade wares.

Even though the festival only lasts one day, the event offers for businesses and groups in Jackson County chance for greater exposure that last for years.

As a business owner, Matthew Turlington said the festival is a chance to broaden his customer base.

“You hope that it brings your standard customers and new customers,” said Turlington, owner of Penumbra Gallery and Studio.

The event draws new potential clients and more emails for their list-serves. This year, the downtown association will survey vendors and local businesses to get a concrete idea of how the local economy benefits from the festival.

“For me, that is the best part. The impact lasts,” Elders said. “It’s really been a lot of economic benefit, not just for the downtown.”

It’s also an opportunity for visitors to experience the best things about Jackson County all at once. As a Jackson County resident, Turlington said his favorite aspect of the festival is its incorporation of Appalachian history, from clogging to singing, and the young performance groups.

“I have always enjoyed the local young talent,” Turlington said.

“(The bands are) a pretty good mix this year too,” Elders said.

The traditional bluegrass and Americana bands will be on hand as well as folk and jam bands.

A third stage will be set up specifically for children’s enjoyment, along with the annual Youth Talent Show. Children’s activities include storytelling, face painting, an inflatable slide, the recycled materials Superhero Costume Contest and volunteer projects. This year’s event will also include a 5K run.

Greening Up the Mountains starts at 10 a.m. and concludes at 4 p.m. on April 28 on Main and Mill Streets in historic downtown Sylva. www.downtownsylva.org.

The Smoky Mountain Stage in the Suntrust Parking Lot

• 10-11 a.m.: Tennessee Jed An Asheville-based bluegrass band with a bit of a rock feel.

Kids become superheroes at Greening Up

What child wouldn’t love to be a super hero for the day? The Downtown Sylva Association is sponsoring a “Recycled Superhero” contest for children during Greening Up the Mountains this year.

All superhero costumes will be made from donated recycled materials – and we need your help to make these dreams a reality. Recycled materials – everything from fabric scraps to paper towel rolls, aluminum cans to cardboard boxes – can be dropped off at Town Hall in downtown Sylva.

Children can build their costume between 10 a.m. and 2 p.m. at the DSA Children’s Booth at Bridge Park; judging will start at 2:30 p.m. near the Children’s Booth. Winners will be announced in several categories at 3:15 p.m. and can take home prizes from local sponsors.

Bring all household items and related materials that could help us make superhero costumes for these kids.