Whether one is an avid outdoorsman or an occasional hiker, there is something special about making a gorgeous waterfall the destination for a hike.

When tourists visit this region, many of them come seeking the beauty and awe of the waterfalls that decorate the slopes of these mountains. One of those natural beauties is a long, cascading waterfall located off of Old Still Road in Maggie Valley.

It was cold, but I was prepared. Leggings and Underarmour, sweatpants and sweatshirt, parka and hiking pants, an array of hats, gloves and scarves — it was safe to say I’d dressed for the forecasted high of 27 degrees.

I’d spent much of the past week indoors, wrapped in blankets against the single-digit chill that assaulted my apartment and dreaming of warmer days. But as the weekend drew near, a realization dawned — all this cold had surely created some beauty out of Western North Carolina’s abundant waterways. I made a decision: I would brave the cold, and I would go find a frozen waterfall. 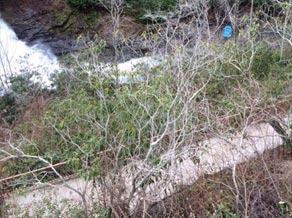 It wasn’t until Brad McMillan got his canoe on the water that the moment hit him. He’d been preparing for this for a long time, both mentally and physically, and he’d just watched his three friends in kayaks descend the falls before him. But once in the water, he struggled to keep the calm of that preparation. Nothing makes the idea of running a 70-foot-high waterfall more concrete than, well, pushing off to run a 70-foot-high waterfall.

Waterfalls have a near mystical attraction

We are attracted to water. Mountain paths always wind down to water ... down to springs, creeks and rivers. Water is the essence of our very being. Old-time mountaineers picked home sites according to the location and purity of springs. Long before the first Europeans arrived, the Cherokees had developed ceremonials focused on the spiritual power of running water. One of the prized sites for such purification ceremonies was a waterfall. It was there that the Cherokees could hear the Long Man speaking to them in the clear voice of the raging current.

Book captures the essence of waterfalls

Flowing water was the primary agent that sculpted the mountains as we know them today. Long before the first Europeans arrived, the ancient Cherokees had developed ceremonials focused on the spiritual power of running water. One of the prized sites for such purification ceremonies was a waterfall. It was there that they could hear a river — which they identified as “the Long Man” — speaking to them in the clear voice of the raging current.

Waterfalls still speak to us today. Along with scenic vistas and fall colors, they are one of the most sought-after natural attractions in the southern mountains. They are dynamic places that seem to encourage contemplation. Whenever I’m conducting a natural history workshop that encounters a waterfall, I ask participants to contemplate why they are so appealing. Invariably, such qualities as constant motion, soothing sound, spiritual tranquility, natural beauty and harmony of sight and sound are mentioned.

I suspect there are at least 25 waterfall guidebooks for this general region: Western North Carolina, East Tennessee, northwestern South Carolina, and north Georgia. Most waterfalls of any significance have been described in some fashion. Do we need another one? The answer is “Yes, we do, if it’s a good one like Jim Parham’s recently published Waterfall Hikes of North Georgia (Milestone Press; 828.488.6601; www.milestonepress.com).

Parham’s book isn’t just good. In regard to basic content — driving and hiking directions, general and specific maps, elevation profiles and trailhead GPS coordinates, and waterfall photos — it’s really good. And in regard to trail-waterfall descriptions, it’s excellent. The prose is crisp and lively. Parham has an eye for details and a gift for describing what he sees in a concise manner. He also has a nice sense of the tensions that exist where the natural world and recent human activities intersect along old rail beds, at former CCC camps, and similar locations.

Parham grew up in Rome, Ga., and graduated from Berry College. He has hiked, paddled, and biked all over the world. He became a guidebook author in 1992. That year the first of his six-volume Off The Beaten Track mountain bike guide series was published by Milestone Press, which he and his wife, Mary Ellen Hammond, own and operate in Swain County.

When asked, Parham advised me that “his favorite hike” is the Raven Cliffs Trail. That section in his book consists of five pages, which contain a general destination map; a specific trail map; a chart (distance, elevation changes, hiking times, etc.); eight photos of falls encountered along three creeks; and a trail-waterfall description from which the following is excerpted:

“Raven Cliffs Falls is at the head of a waterfall-rich drainage area comprising Dodd Creek, Davis Creek, Bear Den Creek, and Little Low Gap Branch. These all flow down out of the Raven Cliffs and Mark Trail Wilderness Areas to form Dukes Creek. On Dodd Creek alone there are at least six waterfalls within a little over three miles. There are three more on Davis Creek, and Dukes Creek has a few as well. It’s a great place to go for a day hike. With numerous campsites along the trail and elsewhere in the area, it can also make a nice overnight excursion ... Once you see it, there’s no mistaking Raven Cliffs Falls. Dropping 170 feet over, under, and through a breach in the rock face, it’s one of a kind. The most easily seen part is also the most dramatic. Far back in a six-foot wide crack, the water makes a 40-foot freefall plunge into a dark green pool. This magical grotto is guarded above and below by rocks and water … Farther up and about halfway to the cliffs is the second falls. Here the river plunges 15 feet, creating a horsetail, then slips another 15 feet down a long slide. You don’t have to hike too much farther to reach the third falls, and at this point many people think they’ve reached Raven Cliffs Falls. It’s an easy mistake to make, since you’re now in an area of cliffs, high above a 30-foot waterfall that careens and then heads steeply up the hill beside it to a cleft in the cliff where the most dramatic part of the waterfall may be seen. The top is still a long way up, hidden between more rock clefts. You can see where people have scaled their way up trying to reach the top of the falls via a series of sketchy-looking, handover-hand, pull-yourself-up trails. Don’t be tempted to try it. The view of the falls really does not get any better than the one from the base of the cleft. Enjoy it, then head back the way you came.”