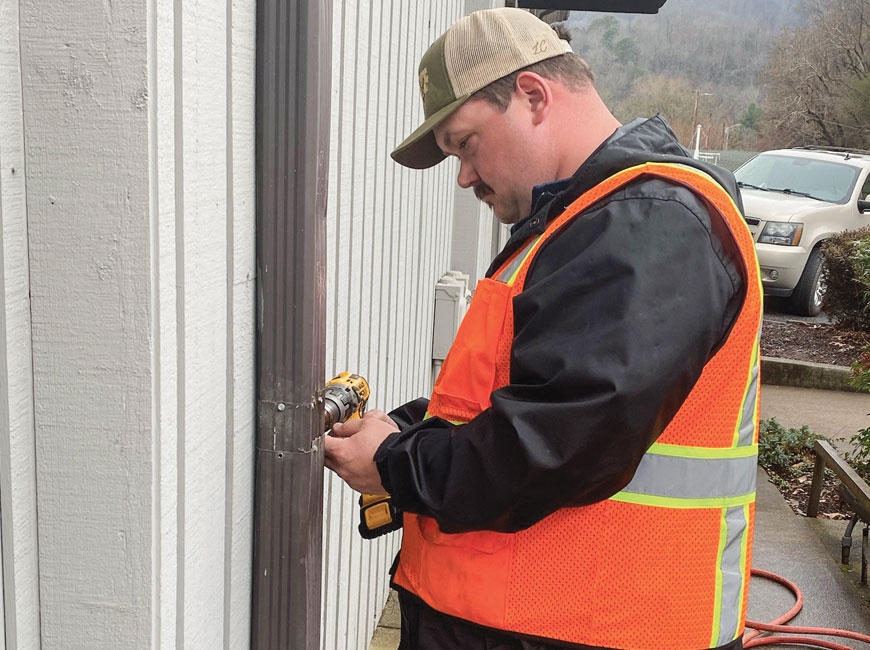 When meetings moved to Zoom and schools shut down last March, Zach Sorrells kept on reporting to work. As a maintenance worker with the Town of Sylva, he’s responsible for jobs that simply must get done, pandemic or no — like trash collection, for instance.

Overnight, it seemed, the coronavirus went from being the faraway concern of faraway people to a present danger that prompted massive lockdowns and reduced the normally busy streets to empty corridors — “definitely some eerie stuff,” said Sorrells.

It was weird, but not outright scary. At least, not scary enough to make him think twice about going to work. Besides, the empty streets made it a lot easier to maneuver the large trucks.

“I really wasn’t that nervous about it,” he said of his essential worker status. “It was just the changes that caught everyone off guard, having to change the way we do things.”

Sorrells, 30, has worked for the Town of Sylva since September 2012, and when trash day comes the crew runs one truck with three workers on board, one driver and two on the back. When the pandemic hit, the town went from running one three-man garbage truck to instead running two two-man garbage trucks, an effort to limit exposure between employees.

The increase in trucks turned out to be a good thing, because when people stay home, they tend to generate more waste. During a January budget meeting, Public Works Director Jake Scott told the town board that municipal solid waste increased by 22.5 percent in 2020, rising from 1,056 tons in 2019 to 1,293.5 tons in 2020.

“It gradually increased and then it sort of finally hit a steady stream for what we more or less started calling ‘normal,’ which was more than what was really normal, but here in the past month or two months it has slowly started to come down a little bit, getting close to what it was before the pandemic,” Sorrells said.

It’s been a devastating year for many, but Sorrells counts himself lucky. He only knows one person who got sick from COVID, and nobody who died from it. His 5-year-old daughter doesn’t start kindergarten until next fall, when school will hopefully be close to the way it was before the pandemic. For now, she stays with her grandmother, Sorrells’ mother-in-law, during the day.

“In the year ahead, I hope we can get back as close to normal as we can,” he said. “Personally, I don’t know if we’ll ever be able to go back to the way it was before, but if we can’t get back to that, I hope we get really close.”