Something to celebrate: Cherokee valedictorian navigates a pandemic 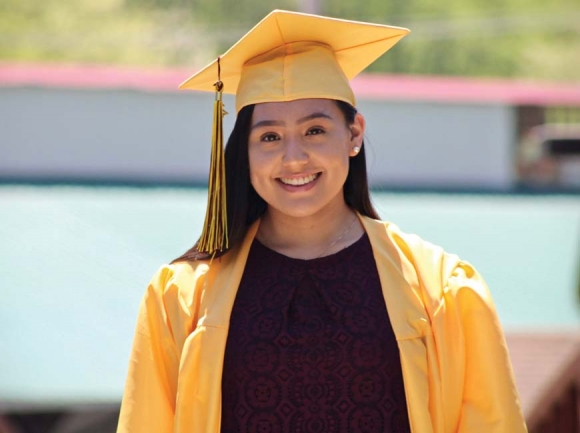 As February melted into March, Raylen Bark was so busy she had little time to think about the fact that her senior year at Cherokee High School was coming to an end, and her long-anticipated freshman year at Dartmouth College drawing ever closer.

Bark, a multi-sport athlete and National Honor Society member, had also been selected as one of 10 tribal members to represent the Eastern Band of Cherokee Indians in the 2020 Remember the Removal Ride, during which she would pedal a bicycle from Cherokee and along the Trail of Tears into Oklahoma. Her days were full of school, strength training, sports practices and games — basketball season was just ending, and track starting up — and then bicycle training. Remember the Removal riders were required to take genealogy, language and history classes as well, and somewhere in there Bark also had to find the time for homework.

Then, the pandemic hit. Sports were canceled, school was canceled and the Remember the Removal Ride, too, was eventually canceled.

“I was really, really upset about everything, because we had put in so much work and time and effort into training for all these things,” said Bark. “It felt like it was just stripped away from us.”

Bark, like high school seniors worldwide, would not get to end her high school career with rites of passage like dancing at prom, scrawling earnest promises to stay friends forever in the pages of 100 yearbooks, and receiving her diploma before a cheering crowd. She wouldn’t even have the chance to say goodbye to her classmates — nobody knew that last day would mark the end of all normalcy.

Life slowed down, drastically. Bark has been trying to use the time well, spending time with her family and learning more about her culture and its accompanying folk traditions from older family members. Bark has long had an interest in such things — the quarantine has just given her more time to nurture that interest. In college, she plans to study anthropology with the eventual goal of graduating from law school.

“I just want to study native law and come back and help the tribe, whether it’s as an attorney or a judge,” said Bark. “I just want to give back to my tribe.”

First, though, comes high school graduation, and Bark will play a unique role in guiding the Class of 2020 through this unprecedented time. On May 13, she learned that she would graduate as valedictorian of her class.

Cherokee Central Schools made the announcement in a video published to its Facebook page. In the video, mask-wearing teachers sit in the gym holding pieces of paper that on one side have letters spelling out the words “salutatorian” or “valedictorian,” with the letters printed on the opposite side spelling out the names of the seniors who would now bear those titles. When they flipped the sheets, the news was out — Tierney Bradley would be salutatorian and Bark, valedictorian. Bark watched the video surrounded by family.

“We were all nervous, I guess, watching the video. And then I was announced. We were all super happy,” she said.

Graduation — which will take place on Thursday, May 28 — will look quite a bit different than in years past. At 4 p.m., a parade of cars bearing the seniors and their guests — limited to nine apiece — will begin at the Exxon station at Whitewater Drive and progress to the Museum of the Cherokee Indian, up Aquoni Road and then to the school. Community members are encouraged to come out and show their support as the parade goes by, though masks and social distancing are required. Once at the school, each senior, along with their guests — all masked — will get out of the car, walk across the stage, and receive their diploma. Instead of giving her speech with her entire class seated in front of her, Bark will make a video of herself reading it, and that video will be broadcast on Cherokee Central Schools’ Facebook page, along with the rest of the graduation proceedings.

As she spoke to The Smoky Mountain News, Bark was still working on her speech. She said she planned to revisit some of the good memories her class had made together and then to offer some encouraging words about the present.

“We’ve really had to persevere through all these situations,” said Bark. “Especially these past months. That’s something that really deserves to be celebrated. I’m extremely proud of how everyone’s been handling it.”