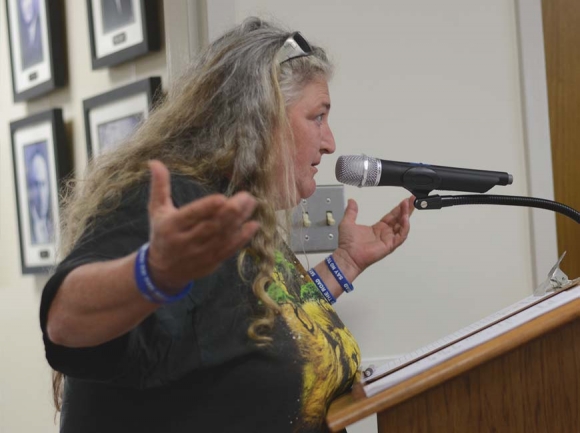 The time to tweak plans for Sylva’s controversial N.C. 107 project is past, residents were told during a well-attended town meeting Thursday, Sept. 12.

More than 30 people were at the meeting to deliver public comment and hear an update from N.C. Department of Transportation Division Engineer Brian Burch.

“Essentially, we’re at the point where we have to move forward with the engineering design that we have,” he said. “The opportunity for public information or public comment has passed. We either move forward into right-of-way and construction, or we stop completely and essentially restart the process, which in my estimation would take 10 more years.”

The N.C. 107 project has funding to move forward, but if DOT were to go back to the drawing board, that money would disappear. The next opportunity to get a project funded is more than two years away, said Burch, and DOT doesn’t have the cash available it did a few years ago, thanks to weather events such as Hurricane Florence.

“What do you think improvements to 107 would look like in 10 years as opposed to now?” asked Commissioner Greg McPherson.

Burch responded that he expects the project would look about the same, but with traffic continuing to increase in the intervening years.

The DOT has been working on the current plan for three years, said Burch, and that process has included a plethora of public involvement.

“We’ve had multiple workshops, more than any that we’ve ever had on any project that I’m familiar with in Division 14,” he said.

The time has come to act, he said, and DOT will begin acquiring right-of-way in January. In fact, it has begun acquiring some property already. By the end of September, plans that show all the impacts — including those from utility placements — will be released.

Further conversation between Burch and town commissioners revealed that some land that the DOT is currently planning to take — either through easement or as a right-of-way — could potentially be used for business purposes once the project is complete. State law prohibits right-of-way from being used for commercial purposes, such as parking, but such use is allowed on easements. It’s DOT policy to have 10 feet of right-of-way past the curb, but DOT could consider purchasing the right-of-way as an easement or reducing it width, though only on a case-by-case basis, said Burch.

“When the dust settles, is there going to be an opportunity for any of that property to be brought back to the community to become part of the tax base again, to build buildings again?” asked Commissioner Mary Gelbaugh.

“We will have right-of-ways, and those right-of-ways will not be, but we also may have remnant properties or surplus property,” said Burch. Those parcels could be sold into private ownership.

Talk about what to do with N.C. 107 has been going on since the 1990s. Originally, the road was built as a connector between Sylva and Cullowhee — a wide, open road with few, if any, driveways. Over time, the area became more developed, businesses located along the corridor, Western Carolina University began to grow, and a traffic issue was born.

Originally, the DOT’s concept was to build the Southern Loop, a bypass that would connect Cullowhee to U.S. 74 without funneling traffic all the way up to Sylva. In 2002 the Smart Roads Alliance formed in response to that plan, decrying the astronomical expense, environmental damage and harm to Sylva’s downtown economy they expected the project would cause. Eventually, the group won. DOT axed its plans for a bypass and instead aimed to improve the existing roads — namely, N.C. 107.

But as early plans began to emerge for the N.C. 107 makeover, it became clear that approach would take a toll as well. Current plans indicate that 55 businesses and organizations, as well as five residences, are on the list for relocation. While not all of these buildings will necessarily be bulldozed in the process, the DOT will have to take enough of each property so as to render it unusable for its current purpose. A total of 186 parcels will see some degree of impact, ranging from a total taking to a tiny sliver of easement or right-of-way.

For a town Sylva’s size, that will deal a tremendous blow to the business community and the property tax base, not to mention an inconvenience to drivers during the 3.5 years estimated for construction. The plan has sparked strong opposition from many in the community who fear that the road project will permanently cripple the town’s economy.

“I know there’s been a lot of work put into it, but I really believe that there is room for improvement,” said Patricia Purdy, one of eight people to give public comment Sept. 12. “We’re not talking about businesses. We’re talking about people’s lives and their livelihood.”

Jackson County resident Eric Myers expressed concern about the project’s rising cost. Original estimates in 2017 put the total cost of construction and right-of-way acquisition at $33.2 million, but updated figures released this summer upped the estimate to $89.7 million — judging from the final costs of other, similar projects, the project will likely end up costing more like $100 million by the time all is said and done, Burch said in July.

“NCDOT seems determined to ram this boilerplate project through without the least sensitivity to local concerns,” said Myers.

Jay Coward, an attorney and the leader of the Smart Roads Alliance, told commissioners that he’d hoped to have a spot on the agenda to discuss his ideas about the 107 project. Smart Roads recently held a meeting on the topic, with two main takeaways resulting from the discussion — there needs to be a survey, and there needs to be an economic impact study.

“The bottom line is that no one body, no agency, no town, no county, no interested party in this thing has actually studied the economic impact, and we felt like the economic impact of this project ought to be reviewed by a neutral third party, and that it should be comprehensive and be presented in the future to this board and to the county commissioners,” he said.

Coward is on the agenda for the Sept. 17 Jackson County Commissioners meeting, which occurred after The Smoky Mountain News’ press time. He asked town commissioners to weigh in on whether they’d support him meeting with Arthur Salido, WCU’s executive director for community and economic engagement and innovation, to discuss the possibility of an economic impact study.

“If I can get that backing from the Town of Sylva, I feel like I can proceed with Professor Salido in a way that says this is something the Town of Sylva would like to pursue,” said Coward.

Commissioners did not add Coward’s request to the agenda, which would have allowed them to take a formal vote on the matter. McPherson and Commissioner David Nestler both said they thought an economic impact study would be a good idea, but none of the board’s remaining members made a definitive statement.

Members of the public with questions or concerns about the N.C. 107 road project are encouraged to call the N.C. Department of Transportation office in Jackson County rather than the Town of Sylva, Division 14 Engineer Brian Burch said Sept. 12.

“Please contact us,” said Burch. “While this was a project that was vetted through the local governments and it followed the process, at this point DOT is in charge of this project. We are the ones who will have to deliver this project, so we’re the ones that have the answers that we’ll have to provide to whoever is interested.”