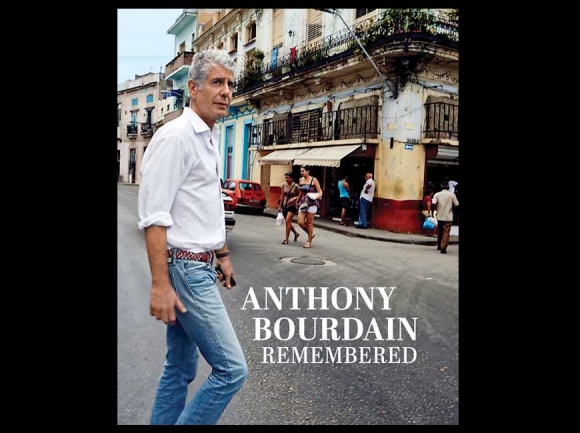 From that best seller, Bourdain went on to write other books and host television shows on cooking and sampling dishes from around the world. He even appeared in a Hollywood film. Though I never watched his cooking shows — by then I had gotten rid of television altogether — friends who did so raved about his wanderings around the planet, eating such exotic foods as a raw seal eyeball among the Intuits and sheep testicles in Morocco.

In 2018, this man who brought such exuberance to the culinary arts and the screen committed suicide by hanging himself in a German hotel room.

Despite that untimely death, Bourdain  had many fans, as can be seen in a new book, Anthony Bourdain Remembered (CNN/Harper Collins, 2019, 201 pages).

In this CNN collection are tributes, mostly sent via email, from other chefs, writers, friends, and fans. In the first entry of this book of photos and remembrances we read the words of Bourdain himself:

“If I’m an advocate for anything, it’s to move. As far as you can, as much as you can. Across the ocean, or simply walk across the river. Walk in someone else’s shoes or at least eat their food. It’s a plus for everybody.”

In these notes of gratitude to Bourdain, we find some who crossed the ocean and some who crossed the river. Alessandro Porcelli, founder of Cook It Raw, writes that Bourdain was “the Bruce Chatwin of food, a wizard of booze, a kitchen iconoclast ….” Cyn H. reports that “… his funny laugh and sense of humor plus all the food and places he traveled, he made me feel more adventurous in my own life.”

Edward Lee, chef and author, had this to say about Bourdain:

“In a distant future, when we look back at this era, at all its clutter and noise, we will dust off the infinite clutter of nonsense, and we will truly see Anthony Bourdain for what he was: a muse who showed us the best of what humankind can be.”

In addition to the many fine tributes to this chef, writer, television star, and humanitarian, Anthony Bourdain Remembered contains a wonderful collection of photographs of the man, the countries he visited, and the people with whom he dined.

The last page of this homage contains another quotation from Bourdain:

“Travel isn’t often pretty. It isn’t often comfortable. Sometimes it hurts, sometimes it even breaks your heart. But that’s okay. The journey changes you; it should change you. It leaves marks on your memory, or your body. You take something with you. Hopefully, you leave something good behind.”

You left something good behind.

In her short book Why Manners Matter: The Case For Civilized Behavior in a Barbarous World (G.P. Putnam’s Sons, 2007, 174 pages ), Lucinda Holdforth offers these words by once-famed author Somerset Maugham about his father and the beautiful mother who was 20 years his father’s junior:

In Paris they were known as beauty and the beast. My mother was very small, with large brown eyes and hair of a rich reddish color, exquisite features and a lovely skin. She was very much admired. One of her great friends … once said to my mother, “You’re so beautiful and there are so many people in love with you, why are you faithful to that ugly little man you’ve married?” And my mother answered: “He never hurts my feelings.”

We Americans could learn some things from Maugham’s brief reminiscence of his mother and father, and from Holdforth’s book. The comments we find on various blogs, and on some of the blogs themselves, are laden with obscenities, hate, threats, and loathing. The writers who post such despicable comments often hide behind pseudonyms, masking their identities while attacking those with whom they disagree. This shrill hatred spills over into our public square: the extreme rhetoric, the doxxing of our opponents, the labeling of entire groups of people as racist or sexist or progressive or reactionary.

The hatred that has infected our politics, the divisions by class, race, gender, and whatever other chasms some of us create, do little good but much harm. When we judge others by the color of their skin, by how much or how little money they make, by whether they are Democrats or Republicans, progressives or conservatives, we violate what Holdforth addresses as the “inner selves that are so hard to find and touch and understand.”

Through his culinary adventures, Anthony Bourdain urged us to reach out to those human beings whose lives are different than our own. Through her book on manners, Lucinda Holdforth urges us “to combine to make something bigger than ourselves. A civil society.”

Sounds good to me.