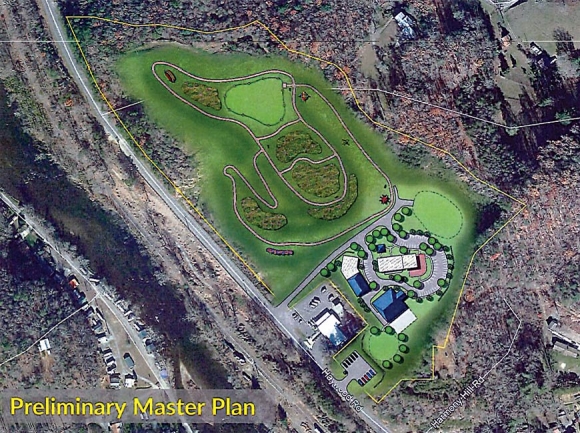 The preliminary plan would include a walking path and dog park atop the old landfill and a new animal shelter and innovation center alongside the existing artisan studios. WithersRavenel graphic

Jackson County got its first glimpse at what a reinvigorated Green Energy Park campus might look like when a preliminary master plan was presented during a county commission meeting Tuesday, Jan. 22.

“It’s a beautiful concept,” said Chairman Brian McMahan as Gary Warner, landscape architect and Parks and Recreation Director for the firm WithersRavenel, wrapped up his presentation.

The master plan proposes developing the 19-acre property in two sections. The northern section, located atop the old county landfill, would be redeveloped into a walking path with a dog park, art installations and a pollinator garden. The southern section, where the Green Energy Park artist studios are now located, would be transformed into a multi-purpose campus featuring an animal shelter, innovation center and event space, in addition to existing artisan facilities.

The plan has a substantial amount of engineering work behind it, with crews analyzing soil borings from 10 sites on the property. While test sites on the uphill portion of the property yielded the typical result of hitting rock after 15 to 20 feet, five sites further downhill had more unusual results.

That provides some solid opportunity for the landfill portion of the project, which is capped with a layer of dirt about 4 feet deep. Any opportunity to increase that cap would improve the safety and flexibility of the site — when topsoil is excavated for development on the Green Energy Park side of the property, said Warner, it can be relocated to the old landfill to provide additional cover.

“There is lots of excess topsoil, which we could put on top of the landfill,” he said. “Solid Waste was very happy about that idea.”

Despite the good news from the soil borings, the site would be a challenging one to develop. In addition to the environmental constraints created by the old landfill, the property’s slope could cause issues. There’s an elevation difference of roughly 80 feet between the road and the recycling center at the top of the property.

“We have some topographic challenges out here in terms of how we get people out there, how we move vehicles around, how we build buildings,” said Warner.

The old landfill is currently a grass-covered meadow offering “tremendous” mountain views, said Warner. The plan would be to tie in the art-focused mission of the Green Energy Park — which fuels glassblowing, pottery and blacksmithing studios in part using methane from the landfill — to the walking path by having artists display a rotating roster of pieces along the way. The area could also hold a dog park that would be substantially larger than the tiny one currently in place at Mark Watson Park. Due to the danger of roots penetrating the landfill cap, no trees could be planted, but wildflowers would be fair game.

Redeveloping the south side of the property would aim to accomplish multiple goals. The county has long needed a new animal shelter to replace the decrepit building on Airport Road, and the existing 17,000-square-foot concrete pad on the property could easily house such a facility, said Warner. The shelter would also have a nearby open space to walk and run the animals.

The plan includes a new event plaza as well as a grassy area that could serve as event space or overflow parking. The existing recycling center at the top of the hill would be relocated to a separate entrance right off Haywood Road so that traffic would not have to pass through campus.

Perhaps most notably, the campus would house a 13,000-square-foot innovation center to be operated through a partnership with Western Carolina University. The center would feature a “maker’s space” where students and community members could combine art with engineering and design to develop new creations, and it would also be used for college classes, community outreach and K-12 education.

The whole endeavor came about from a study a pair of WCU professors completed last year at the behest of the county and the university. Interim Chancellor Alison Morrison-Shetlar had been interested in using the Green Energy Park property as a joint campus of WCU and the county, and the two organizations partnered to have Wendy Cagle, director of WCU’s Small Business and Technology Center, and Yue Hillon, associate professor in the College of Business, explore the possibilities there.

In a joint meeting between Jackson County and Dillsboro elected officials last year, Hillon and Cagle presented their findings, which pointed to the innovation center concept. It would serve a need in the university and in the community, they said, and if a new animal shelter were built on the same campus that facility could benefit from college students in need of service learning opportunities.

Under the concept, the partnership would operate in much the same way as Jackson County’s relationship with its K-12 and community college organizations — the county would fund buildings and capital improvements, while the university would pay for staff, supplies, equipment, programming and other operational expenses for the innovation center.

WCU, Jackson County and Dillsboro officials alike were in favor of the initial concept, with commissioners voting unanimously in June 2018 to spend $45,000 for the master plan from WithersRavenel.

“There is a lot of engineering data that’s behind the plan itself,” said County Manager Don Adams Jan. 22. “As stated at the beginning, this is a challenging site. We have multiple levels, they have the quantities of earth that need to be moved. From the borings they know what kind of earth they need to be moved, so at this point we’re formulating an estimated cost.”

Those estimates were not available for the master plan presentation Jan. 22, but Adams expects to present them to commissioners at their next work session, slated for 1 p.m. Tuesday, Feb. 12, at the Jackson County Justice and Administration Center.

Once those numbers are known, commissioners can start breaking down the costs, gathering input from the public and making concrete decisions about how to proceed.