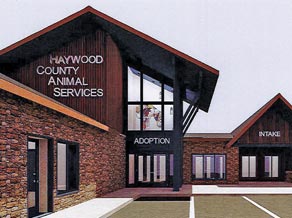 In a perfect world, an animal shelter is just a temporary stopover for pets in search of a new owner.

But too often, it’s a purgatory they never escape from.

The Friends of the Haywood County Animal Shelter hopes to improve the odds that pets coming into the shelter will connect with a new owner by launching a $1 million fundraising campaign to help build a new state-of-the-art animal shelter serving Haywood County.

“We want to provide an environment that gives them the best chance of finding another home, and taking care of them while they are there,” said Sarah Jane League, chair of the Friends of the Animal Shelter group.

The current animal shelter, which dates to the 1980s, is run-down, outdated, noisy and overcrowded.

“The conditions are rather terrible,” League said.

Pets that end up in the shelter are often scared, stressed and even frantic, making them seem less adoptable. The conditions aren’t pleasant for the public either.

“It is so heart-wrenching and unpleasant for them to go in there,” League said. “When one person comes back and a dog starts barking it becomes an uncomfortable situation both for the dogs and the humans.”

The new animal shelter will be quieter, more spacious and less intimidating for people walking in off the street.

“For folks who are looking for a pet to adopt, it is going to be a more friendly place to come. We will actually have meet and greet areas. Right now we don’t have that,” said Doyle Teague, director of Haywood County Animal Services.

The only way to visit with a dog is inside their small concrete and chain-link cage, with dogs on either side yapping like crazy. Or for a cat, to crouch down on the floor of the cat room lined with cages, hoping to entice the scared feline from its corner.

More than 40 percent of the animals brought to the shelter last year were voluntary surrenders.

“One of the number one reasons is their landlord won’t let them keep the animal, and a lot of times they are very upset,” Teague said.

A separate receiving area for animals will allow staff to talk with the owner and learn about the pet being dropped off, Teague said.

The price tag of the new animal shelter, to be located near Jones Cove Road in Clyde, is $3.5 million. The nonprofit Friends of the Haywood County Animal Shelter hope to raise $1 million toward the cost, helping realize the vision for a new state-of-the-art animal shelter.

“If people looking to adopt a pet can come into a facility that is nice and inviting, in the end we save more animals that way,” League said.

To get involved, visit www.hcasfriends.org.

The Haywood County Animal Shelter has undergone a philosophical transformation over the past decade from a place where unwanted pets are warehoused while waiting to be put down into an adoption-center mentality.

Great strides have also been made thanks in large part to the effort of animal rescue groups like Sarge’s and FUR that aggressively market dogs and cats for adoption, along with Haywood Spay and Neuter that helps reduce unwanted litters and strays in the first place. Here’s a look at Haywood animal shelter euthanasia rates last year compared to a decade ago.