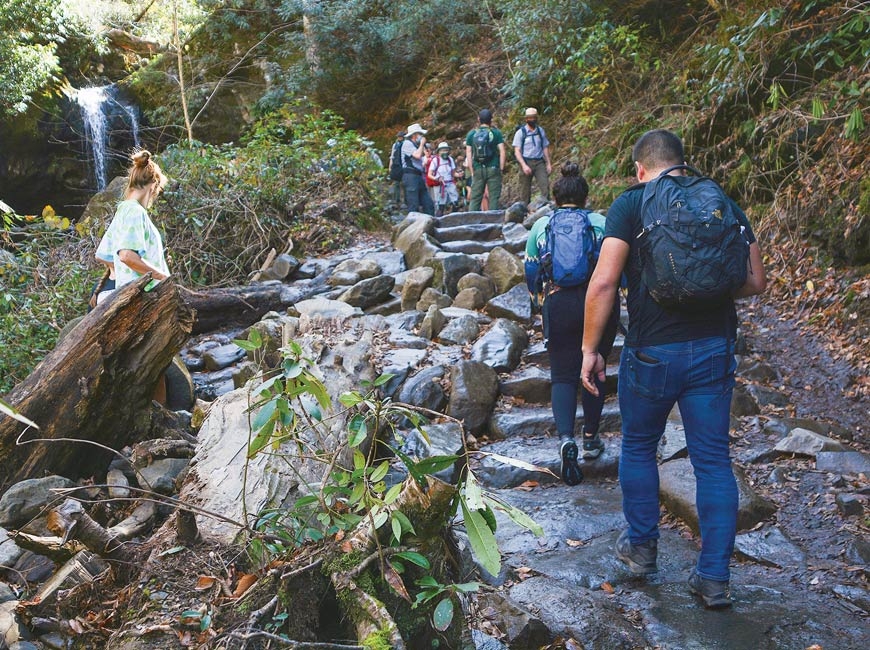 The few remaining leaves hanging in the trees shine like stained glass as the morning sun rises high enough to outrun the slopes above Trillium Gap Trailhead in the Great Smoky Mountains National Park. The abnormally warm November day is perfect for hiking, the play of sunlight on autumn leaves and the sweeping views glimpsed through mostly bare branches commanding complete attention. It’s easy to forget the ground beneath your boots, feet moving forward automatically as eyes focus up and around, only occasionally flickering downward.

It’s the way hiking is supposed to be, but until quite recently a hiker who failed to keep her eyes on the ground while walking Trillium Gap to Grotto Falls or progressing to the trail’s terminus at Mount LeConte would likely trip at least once. Now, after two years of work, thousands of hours of labor and millions of pounds of materials, an extensive rehabilitation project on the Trillium Gap Trail is complete. In total, the project cost $1.338 million, of which $550,000 came from Friends of the Smokies and $788,000 from the National Park Service.

“I’m so proud of the work that our group did, our Trails Forever Crew did,” Smokies Superintendent Cassius Cash said during a ribbon-cutting ceremony Nov. 10. “It’s all about sustainability.”

Trails Forever is a partnership program between the park and Friends of the Smokies, which has donated more than $2 million over the last decade to employ a highly skilled trail crew focusing on reconstruction efforts at high-use and high-priority trails. The program also provides a mechanism for volunteers to work alongside the professional trail crew — in 2019, 53 volunteers contributed 386 hours of labor to the Trillium Gap project, though none participated in 2020 due to the pandemic. 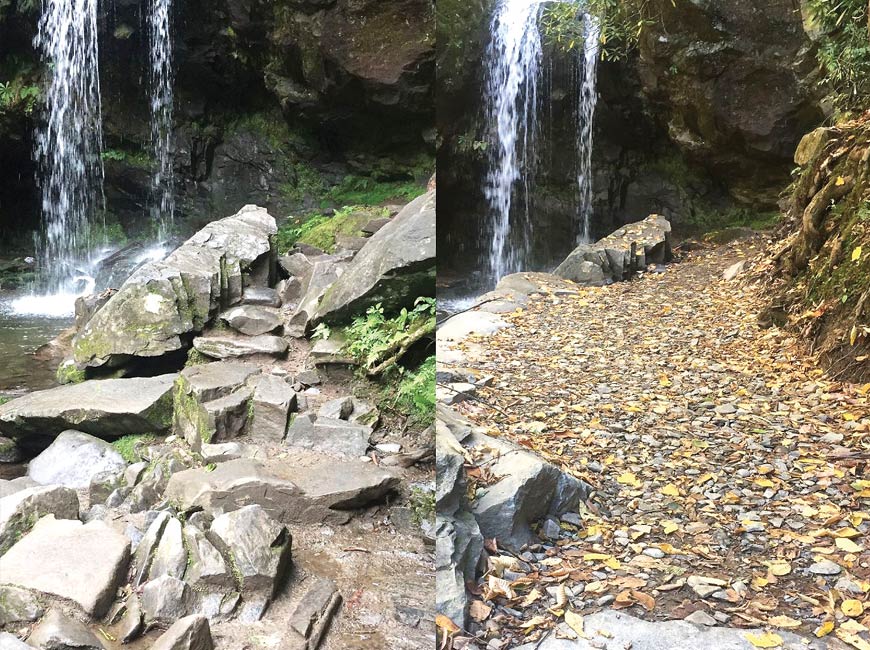 The Trillium Gap Trail was first built by Civilian Conservation Corps crews in the 1930s, and in addition to the wear and tear you might expect any facility to incur in the space of 90 years, the trail has — like the rest of the park — seen a dramatic increase in use since then. In 1940, only 860,960 people visited the park over the entire year. In seven out of 12 months last year, visitation outstripped that figure within a single month. Trillium Gap is one of the six trails leading to Mount LeConte and features Grotto Falls just 1.3 miles in, so it’s a popular choice among the park’s 12 million annual visitors.

Decades of use, erosion and gradual trail braiding and widening caused by millions of feet had resulted in a trail that in many places was deeply eroded with exposed roots, rocks, mud and user-created side paths that could confuse wayfinding and further exacerbate erosion issues. Chief Ranger Lisa Hendy said that the rehabilitation work is sure to reduce the number of emergency calls rescue teams receive there.

“When people come down tired and the trail has been smoothed out, and it’s been built well, and there’s not a lot of loose rocks and things in it, it just makes it that much less likely that they’re going to hurt themselves,” she said. “High-quality trail work is the foundation of preventative search and rescue.”

Smokies Emergency Manager Liz Hall is currently analyzing park data to get a better idea of where in the park rescue calls are occurring and how those hotspots have changed over time. While those statistics are not yet complete, she could say that, anecdotally speaking, the number of calls has gone down following completion of previous trail rehabilitation projects.

The hallmark of a quality trail construction job is a path that flows so smoothly and flawlessly that you barely notice it’s there, or realize that your stroll through the woods is possible due to thousands of hours of backbreaking labor that somebody else put in years before.

“Our goal is just to make it look like a natural footpath,” said Trails Forever Crew Leader Josh Shapiro. “We want to go as minimal as we can on structures.”

Going minimal on structures does not mean going minimal on labor. Rehabbing every segment along the 6.7-mile trail in need of work required bringing in 14 million pounds of crushed rock to fill 80,000 cubic feet, along with somewhere between 700 and 800 black locust logs to create steps and water bars. Altogether, the crew installed 681 steps, 224 square feet of retaining walls, 525 linear feet of drainage ditches, 378 linear feet of elevated trail surfaces and 51 drainage features.

At the approach to Grotto Falls, crews began to use more rock than stone in the construction of steps, water bars and other features. In total, they placed more than 538 native stones along the trail.

“Stone is always our first choice,” said Shapiro. It’s heavier and harder to move than locust wood, and because crews are only able to use stone harvested from within the trail corridor, it’s harder to come by. But it makes up for those shortcomings in durability. Stone lasts much longer than locust.

That said, the rock steps at the Grotto Falls approach were probably the most difficult features to build, Trails Forever Crew Member Eric Wood said. Stone weighs about 200 pounds per cubic foot, and federal regulations prohibit the crews from using machinery on the trails, so the rocks had to be moved with ropes, pulleys and pure muscle.

“I think this is probably what we’re most proud of from last year,” said Wood, gesturing to the stonework surrounding the falls.

COVID-19 also complicated the project. Locust may be lighter than stone, but a 50-foot log can still weigh several thousand pounds. The crew had hoped for a helicopter to drop the logs needed for the upper portion of the trail at the top of the mountain, but pandemic-related issues derailed that effort.

“The mules were able to get into some spots,” said Shapiro, “but we had to carry these logs much longer distances.”

That fact, plus the sheer effort involved in getting to the work sites, made the second year of the project especially challenging. The first year focused on the lower part of the trail near the trailhead, but during the second year, crews hiked long distances to reach their backcountry worksites.

“Having to hike 10 miles a day, that burns up so much time,” said Shapiro. “We just have less time to work on the trail, and we have to get the same amount done.”

Get it done they did, and the result is a sturdy, sustainable trail that’s built to guide hikers to the top of Mount LeConte for decades to come.

“It’s kind of a once-in-a-lifetime opportunity to get to reimagine this from start to finish,” Smokies Trails Manager Tobias Miller said at the ribbon cutting. 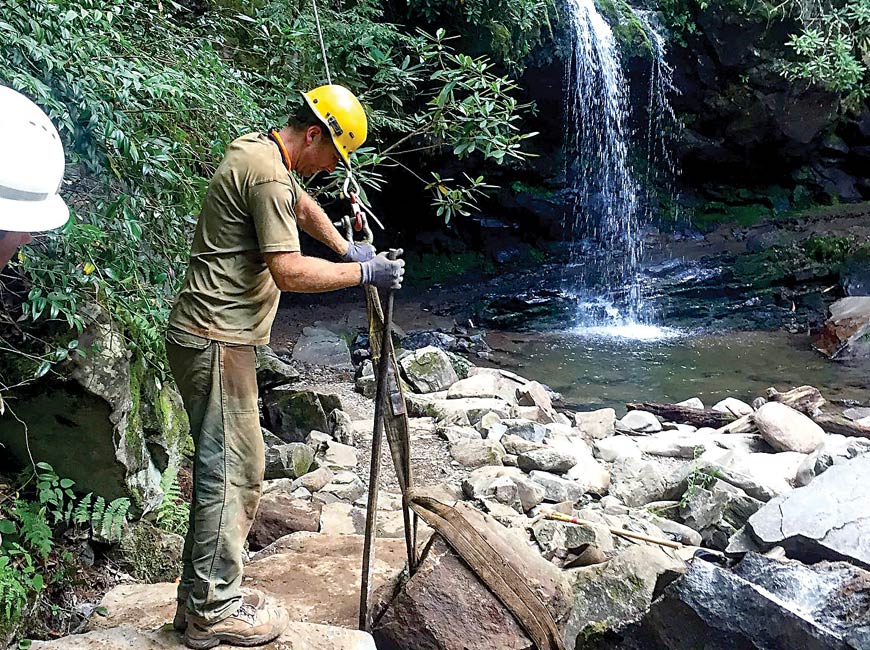 Up next, Abrams Falls

Trillium Gap is the fifth trail in the park to get a complete makeover courtesy of the Trails Forever program — previous projects were the Forney Ridge, Chimney Tops, Alum Cave and Rainbow Falls trails — and it won’t be the last.

In 2021, the crew will start work on the popular Abrams Falls Trail, whose trailhead is located in the far western end of Cades Cove.

“We’re very excited about that trail, because it is one of our top most visited trails,” said Tim Chandler, executive director and CEO of Friends of the Smokies.

Heavy use has taken its toll on the trail, which has widened and eroded over time. The choice represents a pivot to focusing more on shorter trails that tend to attract less experienced hikers, said Smokies spokesperson Dana Soehn.

“Sometimes it’s more beginner hikers on some of these more popular trails, short trails to waterfalls, and Abrams Falls fits that,” said Soehn. “It’s only about two-and-a-half miles to the destination. We get a lot of new hikers who often are not as prepared with the foot gear and everything they need to be able to have a safe hike.”

The safer and more well-maintained the trail is, the more accidents — and subsequent search and rescue responses — can be prevented.

In keeping with that line of thinking, the Trails Forever Crew will also perform critical work on other trails simultaneously with the Abrams Falls project, including the Noah Bud Ogle Nature Trail, Oconaluftee River Trail and Fighting Creek Nature Trail.

The Abrams Falls project won’t be as hefty an undertaking as the Trillium Gap rehab, but it’s expected to take at least one full season to complete. A full closure of that trail will go into effect during weekdays May 10 through Nov. 10, 2021, with the trail closed from 7 a.m. Monday to 5:30 p.m. Thursday throughout that time but fully open Fridays, Saturdays, Sundays and federal holidays.

“There are a lot of injuries out there,” Shapiro said, “so I think we just want to try to make it a lot safer.”