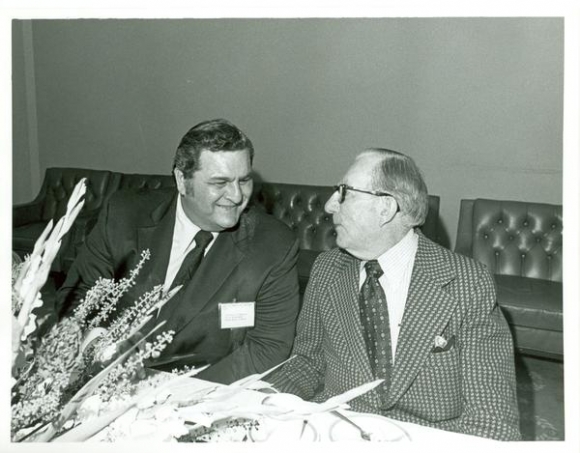 Characterizing the police as a social-service agency isn’t likely what comes to most minds nowadays, and certainly not among people of color.  Burned in memory here in Asheville are photographs of Asheville police destroying a makeshift street clinic set up by local medical workers to assist protesters, an action so mindless that even the police chief apologized for it two days later.  These images are creating an equally mindless battle cry of “Defund the Police” as if the root problem is one of municipal budget allocation.

This isn’t policing as Rocky Pomerance practiced it during one of the nation’s most turbulent periods of public unrest.

My thoughts of Chief Pomerance, don’t spring from nostalgia, but rather from his relevance to these current events.  His approach to policing may suggest that the way forward for police departments in 2020 is to look backward at what happened in the summer of 1972 when a nation as polarized then as ours is now focused attention – and anger -- on Miami Beach.

For the first time in the nation’s history – and likely the last -- both the Democrats and the Republicans gathered just weeks apart in the same city to nominate their candidates for president.  For the Democrats it was to be the almost monkish Democrat George McGovern, a prairie populist, and the incumbent Republican President Richard Nixon, a man as loathed by many then as our president is by many now.

The nation was roiled by the Vietnam War as the death toll climbed to 50,000 with neither an end in sight nor a rationale for engagement.   In addition, racial tension boiled beneath the surface as Nixon stoked white fears of integration to broaden his base, luring George Wallace’s segregationist backers to the Republican side.

Protesters of all stripes – veterans against the war, Marxists, hippies, the Black Panther Party, Jane Fonda and more -- descended on the ocean-resort city known then mostly for its fading hotel strip, race tracks, hoodlum visitors and shabby boarding houses where elderly pensioners idled away their days on park benches or shuffle-board courts awaiting the early-bird special hour at the local delis.

It fell to Rocky Pomerance to protect his citizens, along with the president of the United States, the convention attendees and the thousands of protesters intent on being heard and, if possible, aiming to disrupt the political gatherings.  Lying heavily on Pomerance’s mind was the memory of what had happened four years before at the Democratic Convention in Chicago, the culmination of a year that had seen Martin Luther King Jr., and Bobby Kennedy murdered, and major cities engulfed in infernos of rioting and fire.

When protesters converged that summer on Chicago, Mayor Richard Daley ordered his police to crush their demonstrations using all force available.  The media called it “a police riot.” More than 1,000 protesters were hospitalized; equally large numbers were jailed.  Author Norman Mailer called it the “Siege of Chicago” in the title of his aptly named book.

It was apparent to all in 1972 that the Miami Beach conventions provided more than enough kindling to repeat, and maybe exceed, that explosive event.

Rocky Pomerance was a boulder of a man, nearly 300 solid pounds with an unruly mop of black hair who, despite his job and his girth, was also a lover of ballet and fond of quoting Shakespeare.  His daily dress could range from a brightly patterned tropical shirt to a blue blazer with slacks, almost never a uniform.  His top assistant, later a judge and mayor, was the bookish and brilliant Seymour Gelber, who always wore summer suits and a bow tie (his son Dan is a former federal prosecutor and the current mayor of Miami Beach).

But more important than this casual, anti-militaristic appearance was Pomerance’s philosophy of policing, a philosophy he did his utmost to inculcate into his department.  He recruited to his ranks policemen and policewomen with college degrees and encouraged on-going education.  He wanted thinkers and problem solvers, not soldiers.  All city police took classes in sensitivity training, some of them taught by well-known provocative figures experienced in confrontation.  The officers learned they needed to passively accept being cursed and spat upon without responding to anger or violence.

The goal was that each police officer embrace as his or her literal mission the meaning of the familiar motto, To Serve and Protect.

As the protesters arrived in Miami Beach, Pomerance made available Flamingo Park – the Banyan-tree shaded heart of the city – for their use.  It was divided into sections with each assigned to the different protesting tribes.  All of them could share the city swimming pool, which was kept open 24 hours a day, and the amphitheater where each faction could air their grievances.  There was no curfew.

Pomerance and Gelber would start the day by walking through the park and chatting with the protesters, getting to know the leaders, ignoring the ubiquitous use of marijuana and, true to the motto, offering to serve their basic needs.  Pomerance had told the neighborhood’s anxious, mostly Jewish, septuagenarians that the protesters were like their college-aged grandchildren expressing their ideals but also hungry for familiar food.  So these seniors cooked up homemade meals to be served in the protesters’ makeshift soup tents.

Far from tearing apart medical tents as happened in Asheville, the city helped to provision and staff makeshift clinics. The most common treatments were for drug overdoses and sunburns suffered by demonstrators who insisted on parading nude around the park.  (When one group threatened to march naked down a city street, Pomerance said he would accompany them wearing only his police helmet; the threat fizzled).

But the Republican gathering posed the real challenge as the size of the protester ranks grew into the thousands as did the level of hostility.  Some groups made public their intention to disrupt Nixon’s nomination and the GOP celebration, possibly with violence.  The second half of the police motto – to Protect – was to be tested.

Pomerance, while making his morning rounds, told protest leaders that there would be boundaries they must respect, boundaries backed by police and law-enforcement agencies from around Florida if necessary.  But in a stroke of genius he thwarted the protesters’ efforts to disrupt the convention without putting police into a face-to-face, inevitably violent, confrontation that is so familiar today.

To protect the convention hall on the night of Nixon’s nomination speech,  Pomerance brought in hundreds of city buses from across Florida and parked them bumper to bumper,  six-deep around the hall’s access points.  The few protesters who made it through this maze were, as warned, quickly arrested, put into vans and taken to jail.

To be sure, some protesters, largely out of frustration, streamed down Collins Avenue, the city’s main street, smashing windows. They were met with tear gas or pepper spray and police with billy clubs.  But just 22 people, including two police officers and three news photographers, were treated for injuries and only one – a Vietnam veteran – had to be hospitalized after being hit by a car not involved in the protest.

In all, it was an astonishing counterpoint to Chicago and it made Pomerance a local hero and international legend.  A few years later he was elected president of the international police chiefs association – a remarkable honor for a cop from a relatively small city.  His philosophy was widely studied and, for a period, emulated.

The mystery is how this philosophy lost its way and the model practiced by the Chicago police in 1968 returned.  Some cite fears of crack-cocaine driven criminals stoked anew by ambitious politicians who enacted punitive sentencing laws.  SWAT teams became a police department necessity and the media glorified their violent methods.  And departments got hooked on the availability of surplus military weaponry whether they needed it or not.  Once equipped, the equipment was eagerly used and military tactics employed.  Police commanders began to look at their communities as the “battle space,” to quote one Trump administration leader.

I am certain that Rocky, who died young at 66, wouldn’t go along with this.  But he also wouldn’t accept an effort to “defund the police.”  To the contrary he would advocate spending for police education and training so the officer who responds to that late-night call for help knows how to deescalate tension if necessary, and how to respond to hostility without today’s all-too common over reaction.

A police officer who can’t measure up to such disciplined behavior would be quickly weeded out.  Those who made the grade would be well paid and widely respected rather than despised and feared.  In the end, as Rocky knew, good policing comes from a simple philosophy: hire the men and women who you’d want to show up for you and your family when you made that 911 call.

These are the ones who embrace the mission to serve and protect.  And maybe they can quote Shakespeare and appreciate ballet.

AVL Watchdog is a nonprofit news team producing stories that matter to Asheville and Buncombe County. Tom Fiedler is a Pulitzer Prize-winning journalist, former executive editor of the Miami Herald, and former university professor who lives in Asheville. Contact us at This email address is being protected from spambots. You need JavaScript enabled to view it..