Rumors have been flying on the Qualla Boundary since an investigation into contract awards and human resources actions under Principal Chief Patrick Lambert’s administration was completed last week. The report, a redacted copy of which was posted on the Eastern Band of Cherokee Indians Tribal Council Facebook page, states that the investigated actions “deviated from the Cherokee Code and other documented policies and processes.”

The afternoon of Sept. 27 took an unusual turn in the Cherokee Justice Center when Human Resources Employment Manager Patricia Watkins and a pair of Cherokee Indian Police Department officers arrived to escort Chief Justice Bill Boyum off the premises.

Tension has been high in Cherokee tribal government lately, and when rumors emerged last week that some members of Tribal Council were planning to get Principal Chief Patrick Lambert impeached, it didn’t take long for the gossip to get a public airing.

When the Cherokee Tribal Council voted last month to investigate hiring and firing practices in tribal government, Principal Chief Patrick Lambert made clear that he intended to veto the legislation. But now, Tribal Council is saying that the vote fell outside the scope of Lambert’s veto power and refuses to submit a written document for him to veto.

Work will begin on establishing a shelter for Cherokee’s homeless following passage of a resolution Principal Chief Patrick Lambert introduced this month. 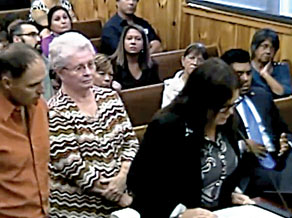 Patrick Lambert didn’t waste any time making waves in his first full day as principal chief of the Eastern Band of Cherokee Indians. That Tuesday morning, a handful of tribal employees received official letters stating their services were no longer needed, prompting an emotional meeting of the ex-employees, their families, Lambert, Vice Chief Richie Sneed and Tribal Council Oct. 8. 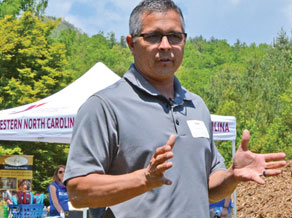 The day after Chief-Elect Patrick Lambert takes his oath of office, Principal Chief Michell Hicks will take over Lambert’s old job as executive director of the Tribal Gaming Commission. 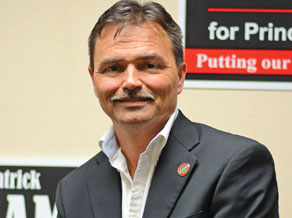 If Patrick Lambert wins his bid for principal chief of the Eastern Band of Cherokee Indians, he expects to be looking a monstrous political version of a honey-do list when Election Day is over.