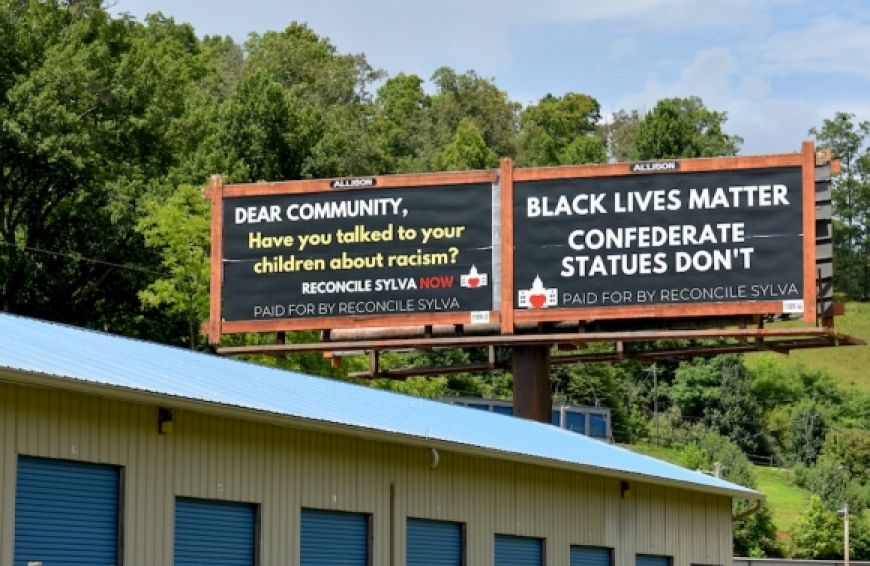 “With regards to taking down some of the billboards, it would ultimately in our opinion hurt the Jackson County business community and local organizations that we currently work with, so please if you would table any potential vote today,” Dicks said during the public comment portion of the meeting. “Allow me to work with you guys to come up with a win-win solution.”

Two hours prior to the meeting, Dicks emailed commissioners expressing those same sentiments and included an attachment outlining some potential solutions. First and foremost, Dicks said, Allison Outdoor is revising its copy acceptance policy to distance the company from ‘hot button issues,’ with the updated policy disallowing billboards that feature “political/non-commercial speech pertaining to ‘hot button’ issues” such as “race, religion, sexual orientation or any other topics which are politically sensitive.”

“Had this portion of our policy been in place a few weeks ago, none of this would have come up,” Dicks wrote in the email.

Allison is also open to renegotiating its leases with the county, or to purchasing the land containing the billboards outright, reads the list of proposed solutions. The company is willing to give the county up to four weeks per year of free billboard space to use for public service announcements.

“As a company, Allison Outdoor has been helping Jackson County businesses for over 60 years,” the proposal reads. “And during that time we have run a lot of local public service campaigns to help promote events, issues and other matters to spread goodwill throughout the community…Please let’s find a workable solution to keep these billboards up.”

The discussion came after a request from the racial justice group Reconcile Sylva to lease a pair of billboards on land owned by the county beside Mark Watson Park was denied. Allison Outdoor told the group that the terms of its 1976 lease with the county prevented it from displaying the proposed artwork.

The first piece in the two-panel display was to read “Dear Sylva, have you talked to your child about racism? Reconcile Sylva Now,” while the second was to read, “Black Lives Matter. Confederate Statues Don’t.” Allison Outdoor denied the request based on a provision in the lease agreement prohibiting use of the billboards for “political ads or issues, or for promotion of subjects which are politically sensitive or which might tend to imply the County of Jackson has taken a position in regards to a political matter.”

When approached by Reconcile Sylva about the matter, County Manager Don Adams said that it seemed Allison Outdoor had managed the lease appropriately, but in a follow-up discussion with county commissioners during an Aug. 11 work session, he said that being asked to weigh in on the specific language of an ad had put him in a very uncomfortable position. He recommended that the board either update the lease to make Allison Outdoor solely responsible for adjudicating content or get out of the billboard business altogether. Reconcile Sylva, meanwhile, changed its plan to lease a more expensive billboard space along U.S. 441 in the Savannah area of Jackson County.

The county has two leases with Allison Outdoor. It receives $50 per year for the downtown site and $2,200 per year for a second site along U.S. 441, where the Jackson County Emergency Management Department is located.

During the work session, most commissioners agreed that the best course of action would be to terminate the leases completely. However, after receiving Dicks’ suggestions they decided to discuss the matter further before taking a vote, as Adams said he and County Attorney Heather Baker had been unable to review Dicks’ suggestions prior to the meeting. The lease requires six months’ notice prior to termination.

“I would still point out to the board that at the end of the day, no matter how we renegotiate this lease, the billboard would remain on county property and whether we allow Allison Outdoor Advertising to make the final call on what’s appropriate subject matter or whether we wish to put restrictions ourselves, this board if we wish to continue needs to be willing to turn this issue over to Allison Outdoor and not be involved in what subject matter would be on the billboards,” he said.

Commissioners intend to discuss the matter during a Sept. 8 work session and will likely vote during a regular meeting scheduled for 1 p.m. Tuesday, Sept. 15. Meetings are livestreamed and available on the “Jackson County North Carolina Local Government” channel on YouTube.