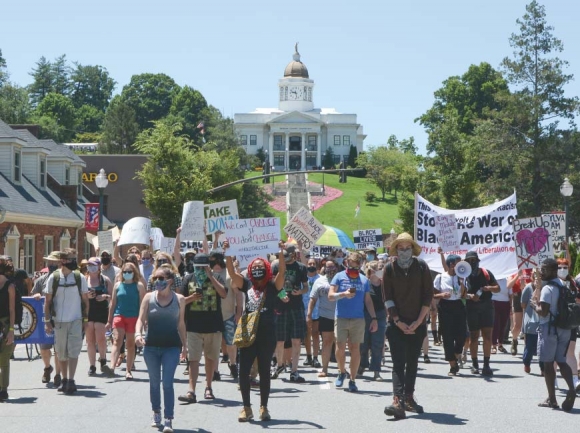 Protests, rallies and marches have become commonplace in Western North Carolina over the past six weeks, but dueling demonstrations in Sylva last weekend featured for the very first time a totally new aspect — the presence of trained legal observers.

“Our group tries to act as a calming presence,” said Ben Scales, an Asheville attorney who with several others donned yellow shirts bearing the term “legal observer” and volunteered to attend the events on July 11. “We like to call ourselves ‘Constitutional law enforcement.’ We can’t arrest anybody or stop anybody from being arrested, but we can document and investigate and report, hopefully to protect people’s constitutional rights of freedom of assembly and other First Amendment rights.”

Scales said it wasn’t his first protest, but it was his first west of Asheville, where he’d spent time observing all summer.

“We have a loosely connected group of attorneys and other people who are trained in the skill of legal observing,” he said. “Some of us have been through National Lawyers Guild training. They have a program for legal observers.”

The NLG established the legal observer program in 1968 after protests at Columbia University in New York and before the violent clashes at the Democratic National Convention in Chicago that same year.

The goal, according to the NLG, is to “enable people to express their political views as fully as possible without unconstitutional disruption or interference by the police and with the fewest possible consequences from the criminal justice system.” Sometimes, legal observers even represent protestors in criminal or civil suits.

“We’ve seen all sorts of things going on,” he said of his time in Asheville. “We’ve seen disparate treatment of different people by police. We’ve seen unwillingness to enforce certain laws against certain groups of protesters and a zealous application of those same laws to other protesters. Generally speaking, the protesters, the counter protesters, law enforcement — they all appreciate us being there.”

Inviting legal observers to an event isn’t as simple as opening up the Yellow Pages; in fact, they’re almost like TV’s A-Team: if you have a problem, if no one else can help, and if you can find them, maybe they’ll be there.

“When an organizer of an event talks to another organizer of an event, sometimes our name will come up and they’ll say, ‘Hey, we could use some of your services for our event,’” Scales said. “We don’t have a hotline. It’s not anything that’s advertised and we reserve the right to say no if we can’t make it but we’re mainly dedicated to being a neutral observing presence at these events.”

But Scales’ experience at the sometimes-violent protests in Asheville hasn’t been all doom and gloom.

“We’ve also seen cooperation at times between organizers and the cities where these events are happening,” he said. “It gives me hope that there is room for dialogue in these events. And, and like I said, sometimes just our mere presence will change the narrative enough to where a constitutional violation that might have happened, doesn’t.”

Before the day’s events kicked into full gear, Scales said he had high hopes for the pro- and anti-Confederate statue demonstrations in Sylva.

“I hope that everybody gets a chance to say what they want to say and put their ideas into the marketplace of ideas. The First Amendment is so crucial to the functioning of a free and fair democracy,” he said. “If speech is stifled or chilled, then we slip toward totalitarianism.”