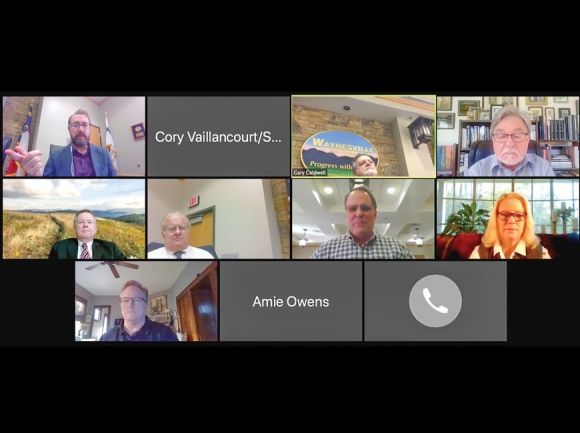 As the COVID-19 crisis roared to life in North Carolina, local governments across the state joined countless other organizations and individuals in clearing previously planned meetings from their calendars.

A month has elapsed since that initial rush to slow the spread, and those same governments are realizing that they can’t stop meeting indefinitely. However, North Carolina’s public meetings laws weren’t written with a pandemic in mind, making the waters murky as elected boards seek to hold meetings that are both safe in the current climate and legal under state law.

“I think the biggest question has been, can a board meet virtually?” said Jackson County Attorney Heather Baker.

The law isn’t clear on this point. While it does include some more recent amendments, most sections of the statute governing public meetings were adopted in the 1990s, long before the era of widespread video conferencing. It does, however, note that the definition of “official meeting” includes simultaneous electronic communication between board members. The most common application of that stipulation is to show that a quorum of board members may not use tools such as group texts and email chains to discuss government business outside of advertised meetings.

“It’s possible to interpret the statute’s mention of a conference call or other electronic means of gathering as a delegation of authority for electronic participation for all public bodies, including local governments,” wrote Frayda Bluestein, David M. Lawrence Distinguished Professor of Public Law and Government at UNC Chapel Hill, in a March 13 post to the respected UNC School of Government blog Coate’s Cannons. “This interpretation is not universally accepted, however. The statute applies to all types of public bodies, and it clearly implies that at least some types of public bodies that have inherent authority, such as state agencies, may lawfully conduct electronic meetings, and that they have to comply with the procedure for providing access. But it’s not clear that the intent of the law was to authorize the use of electronic meetings for other public bodies that don’t have such inherent authority.”

A March 26 advisory letter issued by the N.C. Department of Justice Special Counsel Shannon Cassell attempts to clarify that point in light of the current circumstances.

“Due to the unprecedented circumstance we are all faced with, and the fact that local governing bodies conducting meetings remotely is not expressly prohibited by statute, I conclude that local governments can carry out necessary meetings electronically and remain in compliance with Open Meeting Laws,” Cassell wrote.

While the statute governing county boards of commissioners does not say anything about physical presence at the meetings, the statute dealing with town councils does include one mention of physical presence. That law specifies that if a member refuses to vote on a motion yet remains physically present in the chambers and is not excused from voting by the other members, the member will be counted as an affirmative vote.

For this reason, Cassell cautioned, it’s best for a quorum of the board to be present physically if at all possible, even when conducting other aspects of the meeting electronically. However, he added, if a physical quorum is not possible, “I believe it is reasonable for the governing body to meet electronically.”

“These are unprecedented times, and I feel confident a court will view efforts to remain transparent through a lens of reasonableness, which can be met through electronic meetings,” he wrote.

Jackson County was one of the first local government bodies to incorporate electronic meeting elements as a result of the crisis. During its last meeting, held Tuesday, April 7, the county limited physical attendance in the boardroom to 10 people, eight of whom were commissioners or county staff. A conference room capable of holding four people while meeting social distancing requirements was also open, connected to the meeting down the hall via Zoom. Members of the public were able to offer public comment via Zoom or to submit written comments ahead of time, which could then be read into the record during the meeting. Presenters at the meeting attended via Zoom as well.

“It was a long agenda, just because we put everything on it that we could potentially think of that would need to have board action in April,” said Baker.

Doing so allowed the county to cancel all the other meetings it would normally have held in April. State statute requires county boards to meet at least once per month, and in addition to that legally required meeting, the county will need a work session in May as well. For now, the plan is to conduct those meetings in a similar manner to the April meeting.

Haywood County, meanwhile, continued to meet as normal through March and most of April, though it canceled its April 20 meeting. On April 6, the board approved a new rule allowing electronic meetings when a state of emergency has been declared by the federal, state or local government. County commissioners in Swain and Macon counties continue to meet in person but are live streaming their meetings on YouTube, asking the public to participate that way rather than through physical attendance. However, said Swain County Manager Kevin King, community members are still permitted in the building and can come before commissioners one at a time to give public comment at a safe distance.

Municipal governments are also grappling with the issue. Sylva plans to meet on April 23 for the first time since March 12, and it will conduct the meeting entirely using Zoom — no members of the board or of the public will be present at town hall. Webster and Dillsboro both held meetings outdoors this month to facilitate social distancing, but Webster will hold its May 6 meeting via Zoom, with Dillsboro still deciding how to facilitate its May meeting. The Village of Forest Hills, meanwhile, is continuing to meet as normal, arranging seating so as to comply with social distancing but not imposing any other restrictions.

In Haywood County, Canton canceled its March 26 and April 9 meetings but will conduct its April 23 meeting in person, with social distancing and hygiene measures in place.

Waynesville conducted its March 24 meeting normally, held its April 14 meeting via Zoom, and canceled its April 28 meeting. Maggie Valley has also moved to electronic meetings, canceling its regular April 14 meeting and replacing it with a virtual meeting held April 21.

Franklin canceled both its April 6 and April 14 meetings, replacing them with a special called meeting April 13.  The town did not allow any public attendance at the meeting but provided a livestream of the proceedings. People wishing to offer public comment were invited to send their questions and comments via email to be read during the meeting.

Bryson City held its first meeting since the COVID-19 crisis broke on April 16, but because its normal meeting room is too small to facilitate any kind of social distancing, the town board used the county government’s much larger meeting space, which is able to accommodate up to 20 members of the public while observing social distancing guidelines.