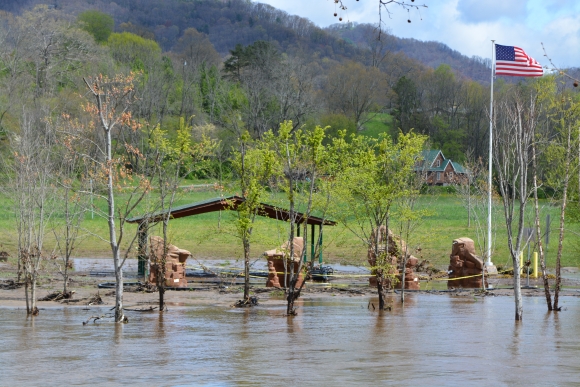 Per National Oceanic and Atmospheric Administration radar, during the 24-hour period ending at noon on April 13, Haywood County east of Interstate 40 picked up between 1 and 2 inches of rain, but the western half of the county reported between 2 and 4 inches. Areas south of Canton, including Cruso, reported more than 5 inches.

“Officially 8.31 inches fell [in Cruso] in a very short amount of time, maybe 6 or 7 hours,” said Greg Shuping, Haywood County’s director of emergency services. “That community took the brunt of it, and then of course the chain reaction began with Bethel, Canton and Clyde, all the way down.”

Those are the communities through which the Pigeon River and its tributaries flow; when they join together, they can produce quick and dangerous floods.

Shuping said he was aware of four specific water rescues carried out by first responders in Cruso and Clyde, although he couldn’t say how many people were extracted during each rescue. Shuping also commended members of the Cruso and Clyde fire departments, who he said had been up all night.

“Got a call at 6 a.m. from Canton FD. River is out of banks and brewery is flooding. On my way to assess damage,” said Kevin Sandefur, owner of BearWaters Brewing in Canton, in a Facebook post around 10 a.m. on the morning of April 13.

The northern sections of Jackson and Macon counties saw between 2 and 4 inches of rain, but almost the entirety of Cherokee, Clay, Graham and Swain counties logged between 3 and 4 inches. Much of eastern Tennessee saw similar totals, with some spots also recording in excess of 5 inches.

Because of one debris flow near Pressley Road, 16 people were evacuated; another three people in Macon County were also rescued from high-water areas. As of 1 p.m. April 13, Duke Energy was reporting just 83 Haywood County customers without power, but neighboring counties didn’t fare so well — Transylvania County still had more than 6,800 customers without power, Jackson County reported more than 5,000, Macon County had more than 2,400 and Swain County had about 700.

By the next day, all Haywood customers had power restored but about 600 in Jackson, 400 in Macon and six in Swain were still awaiting service restoration.