Following the gleam: Gilchrist named Regional Teacher of the Year 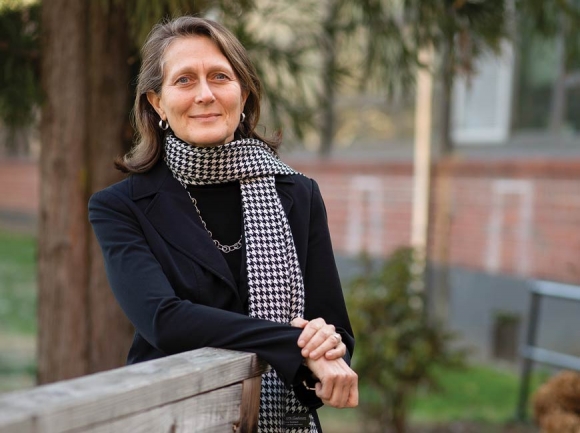 Dawn Gilchrist, who has been teaching English and language arts in Western North Carolina for 30 years, was named Regional Teacher of the Year. David Proffitt photo

Something Dawn Gilchrist’s father-in-law, a retired Methodist minister, once said has stuck with her throughout her career as an educator — follow the gleam, mind the bend and enter the open door.

“The gleam for me continues to be the neediest kids. It’s something I’m compelled to do — it’s a compulsion,” she said. “... I’m a firm believer in John Donne’s 17th Meditation — ’No man is an island’ — and if you have something to give that allows other people to learn what their gifts and their niche is, you can be so fulfilled in helping them find that. Even on hard days these students will say something that takes my breath away, and I’m surprised by the humanity they’ve retained in the life they live, which has given them few opportunities.”

After teaching English at Swain High School for 20 years, Gilchrist was thinking seriously about retirement, but then that gleam returned once more when a colleague encouraged her to apply for a language arts teaching position at Jackson Community School. Formerly known as the School of Alternatives, the school serves about 90 students who are at risk of not graduating.

“I still love teaching and these kids have a lot to offer — sometimes that hasn’t been noticed,” she said. “I wanted to work with a new population of students — more marginalized students — and the department I was leaving in Swain was a strong department. They didn’t need me anymore.”

Even though teaching is something Gilchrist said she fell into, it’s a profession she’s enjoyed and excelled in, which is evident by the many accolades she’s received, including this year’s Regional Teacher of the Year. School administrators surprised her in the classroom Dec. 13 with the announcement that she was named the best teacher out of 14 western school systems. It’s a major accomplishment, but Gilchrist has never seen her strongest qualities as a virtue.

“I was born with innate curiosity and an innate love for the young. I can’t help but to look at a kid and think ‘Woah, what are they going to do? What possibilities lie dormant that can be teased out if I can figure out what engages her mind?’” she said. “For people to give you an award for something you can’t help seems absurd. The award shouldn’t be for me personally but as a representative for these remarkable people that do this every day and do it well and with heart.”

She said she feels like the teachers and students she’s worked with throughout the years have made a much greater impact on her than she has on them.

Studies on happiness have shown that helping others moves you toward happiness, and since helping others through teaching makes her happy, Gilchrist said her motivation for staying in the profession for so long was “ultimately selfish” — though her colleagues would disagree.

Gilchrist said her colleague who brought her to Jackson Community School had a great metaphor for why it’s important for good teachers to teach at schools for marginalized students.

“Everything that happens here affects others — that’s why we need good teachers here. Every kid here will graduate and go out into the world. We want them to know that you can come from a hard background and be a great human being,” she said.

Gilchrist has some idea of what these students are up against. She was born and raised in Western North Carolina.

“I’m local as dirt,” she said when asked about her background. She grew up in Swain County and graduated from Swain High School before earning her undergrad degree in English from Western Carolina University. She ended up teaching ESL (English as a second language) in Randolph County.

“It was wonderful. I worked with an immigrant population and those working toward their citizenship,” she said.

Then Gilchrist attended Columbia University in New York for a master’s degree in literature before moving back south to teach at Rabun Gap-Nacoochee School in Rabun County, Georgia. The private boarding school offered her all the resources she could imagine, but it wasn’t enough to keep her there.

“I was there for four years but I really wanted to work with a population of students that didn’t have as many resources,” she said.

She also earned her MFA in poetry from Warren Wilson College.

“I did it because I love poetry, but I know I can’t make a living at it,” she said.

For someone who has been teaching for nearly 30 years, Gilchrist has witnessed many changes in public education — some good and some disheartening — but she’s always understood the importance of mentoring other teachers and learning from them as well.

“I don’t mentor here (Jackson Community School) but part of the reason I love it here is seeing the energy of young teachers. They come in with enthusiasm and that is one of the things that keeps me going. I learn so much from them and that keeps me enthused.”

As head of the English department in Swain, Gilchrist said she always tried to give her teachers at least one class that they really enjoyed teaching. She did that because she knows how challenging teaching has become — stricter curriculum, more testing and fewer benefits and perks. She also knows that keeping teachers happy equals happy and successful students, but has seen morale plummet as wages, benefits and incentives fall by the wayside.

“Young teachers don’t just have to work a summer job now — many of them have to work two other jobs year around to afford car payments and rent,” she said.

Just as teachers struggle to keep up with the changing world of public education, students struggle to meet societal expectations like never before.

“Kids are exposed to the same pop culture the rest of the country is and it’s not a good thing. They don’t have both parents or they don’t have either of them. They don’t have stability. They may not have a hot meal around the dinner table and you can’t learn if you haven’t eaten or if you’re sleeping in the car,” Gilchrist said.

Over the years, Gilchrist said she’s learned to adapt to what the state requires to meet the needs of the students coming through her classroom. She determines what they’re capable of, what curriculum she has to fit in and what else she can squeeze into it. Her seniors are reading Rule of the Bone by Russell Banks. It’s about a teenager living with his mother and abusive stepfather in an upstate New York trailer park who slips into drugs and petty crime. While it’s set in another part of the country, it’s a story unfortunately many of them can identify with whether it’s their own family or someone else they know.

Her sophomores are reading Night by Elie Wiesel, a story about the author’s experience with his father in the Nazi German concentration camps at Auschwitz and Buchenwald. Her high schoolers have also read works by local authors Ron Rash and David Joy. Knowing only about 3 to 5 percent of her students read literature for pleasure, Gilchrist’s colleagues say she’s good at finding a way to connect to and engage with her students.

“They may not read a lot of literature at home, but they all read — texts, social media, they read in little bites,” she said. “To get them to love reading you don’t introduce them to the classics first — you do that when they already have that love. You have to give them a page turner that absolutely knocks their socks off. If they can see themselves in the writing, it’s not hard to get them engaged.”

“As Regional Teacher you can be as involved as you want to be and go speak at events or not,” she said. “As State Teacher, you take a year off from teaching and work with State Board of Education and attend their meetings to work in a consulting role. You also do a lot of speaking and working with new teachers.”

The last State Teacher of the Year, Lisa Godwin, focused on STEM and was often seen at the rallies for public education as educators from all over the state fought for more funding for school systems and better benefits for teachers. Participating in politics can put educators in a precarious situation. Teachers were asked to take off for one or three days to support the public education rallies in Raleigh — thousands of teachers from around the state chose to while others felt they couldn’t. Gilchrist decided to stay in the classroom with her students, but she’s been vocal about her positions on public education through her writing, including submitting opinion pieces to the local newspapers.

“Teachers have to walk a very fine line,” she said. “My school system is strapped for resources and we would have had to pay for a substitute and my kids would know I went because I want more money. What would they think of me? But another way to advocate is through writing and speaking your truth.”

If she’s selected as the State Teacher of the Year, Gilchrist said she has a simple plan for improving public education — require all teachers to have a master’s degree and pay them $50,000 a year.

“We’re not going in the right direction. The state has not paid for teachers to get their master’s degrees for several years and that has hurt us,” she said. “The legislature voted to raise pay for new teachers but that’s only a start. Yes, we need standards but that’s not going to save public education. It takes good teachers to make a difference and we have to provide the resources they need in the classroom.”