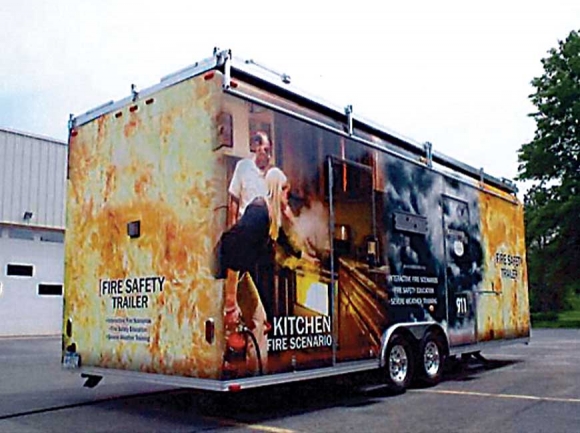 The fire training trailer will be 27-feet long and allow for training on a variety of interactive scenarios. Donated photo

Fire education in Jackson County will soon get a leg up following county commissioners’ vote Dec. 17 to appropriate $169,434 for a Smart Fire Safety Training Trailer.

“I know it’s one of the number one requests from the Emergency Services Planning Committee for the last two years,” said Chairman Brian McMahan during a Dec. 10 work session where the purchase was discussed. “I think if we save one life it’s worth it.”

Jackson County Fire Marshal Michael Forbis told commissioners that his office has tried multiple times to secure grant funding for such a trailer, but to no avail. That’s why he was asking commissioners for their help.

“This is a resource that can not only be used here in the county, but it can be used in adjoining counties regionally,” said Forbis. “We’ve used the trailer from Mills River, from Macon County and from Cherokee in the past to try to help us, but all those are kind of aging out.”

The new trailer won’t be the traditional smoke trailer that’s mainly good for teaching kids to “get low and go” when they find themselves in the midst of a house fire. It will be an interactive experience, a 27-foot trailer with the potential to create numerous hands-on emergency response scenarios. It will include three interior rooms — a kitchen, bedroom and briefing room.

The kitchen, for example, will offer training in oven, stovetop and trashcan fires, and include a training fire extinguisher, cabinets and sink props, a training smoke evacuation fan and a 911 phone. Fires start and grow dynamically in response to the trainee’s actions.

“It allows you to teach age groups from kindergarten all the way to Department on Aging,” said Forbis. “There’s nothing that ties it down to any particular age group like you would with a normal smoke trailer.”

Forbis said that his office has been getting an increasing number of requests for fire education programs. During their annual two-week tour of the schools, they interact with about 2,000 kids.

“If you added up all the requests that we get from everyone, from the schools to the preschools to the assisted living facilities, we get quite a few requests and we’re usually doing something once a week somewhere in the county related to fire safety, at a minimum,” said Forbis before the vote Dec. 17.

The money for the trailer will come from a line item intended for school safety. In 2018, commissioners voted to raise property taxes by 1 cent per $100 of value in order to generate revenue for student resource officers and school counselors, aiming to improve school safety in the wake of the deadly school shooting in Parkland, Florida.

While the tax increase was enacted partially for the purpose of hiring SRO positions, county staff still applied for grants to fund them. Grants were received for three SRO officers, freeing up $130,000 in county funding each year for three years. The $130,000 from the current fiscal year, coupled with $39,000 the county received for aiding with disaster assistance, covers the cost of the Smart Fire trailer.

“I would propose those funds be used for what it was originally intended for, and that’s basically school safety,” said Adams Dec. 10.

“We have a success story every year, and this year after fire prevention, about two weeks later there was a child who called 911,” he said. “When he got home, smoke alarms were going off in the house. He was really calm.”

The vote to fund the trailer was unanimous by all those present, with Commissioner Mickey Luker not in attendance.