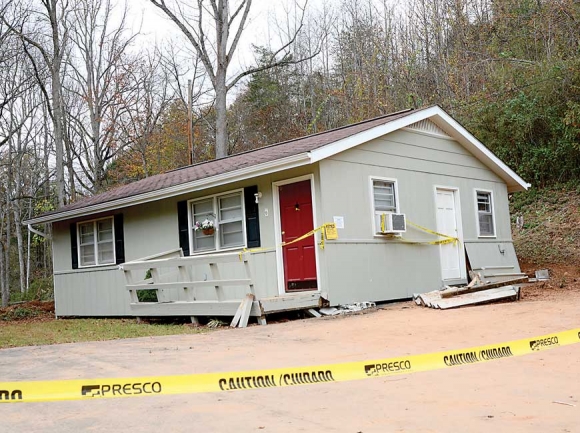 One of the units at Catamount Homes was condemned after a mudslide from construction activities at the Western Carolina University Millennial Apartments knocked it off its foundation Oct. 31. Holly Kays photo

Concerned by ongoing erosion issues at the Western Carolina University Millennial Apartments construction site in Cullowhee, the Jackson County Board of Commissioners has sent a letter to Gov. Roy Cooper and Secretary of Environmental Quality Michael Regan requesting more frequent monitoring on the site.

“Jackson County is urging the North Carolina Department of Environmental Quality to frequently monitor this project and to strictly enforce the State’s environmental erosion control rules,” reads the letter, which is signed by four of the five commissioners. The letter does not bear a signature or signature line for Commissioner Mickey Luker. “We respectfully request that the State allocate the necessary resources to provide the oversight this project needs. Please help us protect Jackson County’s environment and the safety of our citizens.”

Construction of a 500-bed student housing complex located on WCU’s Millennial Campus has been causing violations of state environmental standards since June, with the first notice of violation issued June 17. Additional violation notices were issued June 19, July 31, Nov. 4 and Nov. 13.

The last two violations followed an Oct. 31 mudslide that resulted in the condemnation of one of the 12 student homes included in the Catamount Homes development owned by Sherri Deitz, with evacuation notices placed on an additional five homes until safety could be assured.

Luckily, the mudslide occurred midday when students were out and about — nobody was hurt. However, the event spurred reaction from the community and resulted in a special-called commissioners meeting in which County Manager Don Adams updated commissioners on the history of violations and complaints surrounding the construction efforts.

The Millennial Apartments project is a public-private partnership between WCU and Wilmington-based Zimmer Development Company, with Zimmer building the housing and operating it independently of WCU through a 40-year ground lease and option to renew for another 10 years.

“University officials are in frequent communication with Zimmer on this project,” said Shea Browning, general counsel for WCU. “The university’s primary concern is the safety of all members of the university community and of neighbors throughout the Cullowhee area. University officials will continue to collaborate with the project developer and with Jackson County authorities to develop additional safeguards to prevent future occurrences. It is the university’s desire that its construction and renovation projects, including those undertaken through public-private partnerships, are accomplished with minimal effects on the environment and with the least possible inconvenience to the community and neighbors.”

Because construction is occurring on land owned by WCU, environmental compliance is handled through the state, not through the county. In their letter to Cooper and Regan, commissioners hinted at frustration with the way this arrangement has tied their hands in addressing the situation.

“Jackson County is one of several Counties in North Carolina that is designated to provide oversight of erosion control rules within our County,” the letter reads. “We have chosen to invest in additional personnel and other related costs because we believe that protecting our environment is extremely important. Jackson County’s partnership with NCDEQ has enabled us to better protect our natural resources. This designation does not grant Jackson County authority over State projects. So even though a private developer is building these apartments, Jackson County has minimal erosion control authority over this project because the property is owned by Western Carolina University.”

Following the Nov. 7 special-called meeting, Zimmer’s director of development Adam Tucker told SMN that the issues have been “unfortunate” but that the company is “truly doing everything we can” to make sure it doesn’t happen again.

In a Nov. 13 email, WCU Vice Chancellor for Administration and Finance Mike Byers expressed the university’s confidence that Zimmer would live up to that promise.

“WCU expects no (future) violations on Zimmer’s project,” Byers wrote. “So far, they have complied with their contractual agreement to have plans approved by appropriate governmental agencies. And, so far, their response to violations has brought them back into compliance with the respective agencies, also compliant with their contractual agreement.”

“We are convinced that Zimmer intends to avoid any violations and to respond with urgency and care to problems that arise,” Byers added.

That doesn’t mean that Zimmer will be off the hook financially.

According to public documents, the Division of Energy, Mining and Land Resources has approved Zimmer’s proposed erosion and sediment control plan, with some modifications, to address the latest violation through that office. During a Dec. 2 inspection, staff from the Division of Water Resources’ Asheville Regional Office visited the site to evaluate sediment cleanup for the third notice of violation on the water resources side of things. They found those clean-up efforts to be satisfactory. However, staff found that Zimmer still needed to address how much sediment was removed and provide an explanation of the inadequate erosion control measures, basin failure and inadequate ground cover that occurred.

Violations from the notices that DWR issued June 19 and July 31 have since been corrected, but nevertheless the agency has issued a $14,610.03 penalty, naming both Zimmer and WCU in the suit. However, said Browning, Zimmer will be the financially responsible party due to a provision in the lease stating that Zimmer will indemnify the WCU Endowment Fund against any claims related to the project.

The penalty includes $8,000 for impacting about 900 linear feet of two unnamed tributaries from sediment deposition, $6,000 for exceeding turbidity standards in two unnamed tributaries and $610.03 in enforcement costs. The violations occurred in June and July, but the penalty was not issued until Nov. 6 with documentation released to SMN after the receipt was signed Dec. 9. It is possible that additional penalties could be assessed for the DWR violation issued Nov. 4. No penalties have yet been assessed by DEMLR, which issued notices of violation on June 17 and Nov. 13.

The WCU Millennial Apartments are slated to be ready to rent by fall 2020, with that timeline key to other pending projects related to student housing at WCU. The university plans to demolish the existing Scott and Walker residence halls beginning in May, taking 1,150 student beds out of commission until new dormitories can be built in their place. The 500-bed Zimmer project, together with a newly completed 600-bed residence hall, would replace most of that capacity if completed in time for the fall semester.