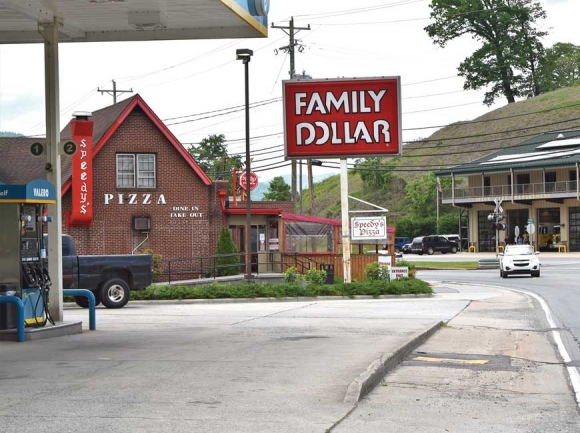 Roadwork on N.C. 107 will begin on West Main Street just past Speedy’s and continue east past Ingles. Holly Kays photo

The N.C. Department of Transportation will pay water and sewer hookup fees for businesses displaced by the N.C. 107 project, but it will be up to business and property owners to ask for reimbursement, right-of-way agent Jake Day told the Tuckaseigee Water and Sewer Authority board last week.

“If DOT is causing the tenant to move, their policy is to try to put them back in a place that is equal to better than where they’re at,” Day told the board. “If there is a fee associated with that move, whether they stay for a week or 10 years, DOT will reimburse the relocatee.”

Day attended the Nov. 12 TWSA work session to answer board members’ questions as the beginning of right-of-way acquisition, slated for January, gets ever nearer. Aiming to improve traffic flow and safety on Sylva’s busy N.C. 107 corridor, the project area stretches from the fire department on West Main Street all the way out past Ingles, also including a one-third-mile section of the Old Asheville Highway from McDonald’s to the N.C. 107 intersection.

The plans have spurred widespread opposition in the community due to the hefty impact they’re likely to have on Sylva’s business community. The 65 percent complete plans listed 55 businesses that are expected to incur impacts sufficient to qualify for relocation funding, with an estimated 186 properties expected to see some level of impact. Since fall 2018, TWSA has been discussing what, if anything, it should do to make the process easier for its customers and to encourage displaced businesses to remain in Sylva. The most recent such discussion occurred in September, with the board deciding to hold off on any policy changes until it could gain a better understanding of DOT’s policies for compensating businesses and property owners — hence, Day’s Nov. 12 appearance.

A core component of TWSA’s discussions has been the issue of system development fees, which until last year were known as impact fees. Users pay them when adding or expanding water and sewer capacity at a given location in order to offset the cost of replacing the system capacity they are now using.

For businesses that need large amounts of water and sewer capacity to run, such as restaurants, they can be in the tens of thousands of dollars. Additionally, allocation stays with the property rather than following the property’s occupant or owner. If a business paid, for example, $20,000 in system development fees at a location but then moved to a new location that did not have existing water and sewer allocation, that $20,000 investment would not transfer to the new store — it would stay with the old location.

That set of facts had some TWSA members nervous that displaced businesses on N.C. 107 could be left facing steep fees to relocate within Sylva. For that reason, Board Member David Nestler advocated for a complete fee waiver for businesses affected by the 107 project. Other board members wanted to wait and gather more information on DOT’s reimbursement policies before changing TWSA’s rules.

Day’s responses seemed to satisfy board members that DOT would, in fact, pay the TWSA fees as part of its reimbursement for moving expenses.

“So DOT’s official statement on this question is it will cover system development fees for everybody who’s relocated, even if you’re a renter?” asked Nestler.

“Tap fees too, bigger meter, all that?” asked Board Member Ron Mau.

“It’s all handled under moving expenses, and if it’s something incurred to the relocatee, then the DOT reimburses them back,” said Day.

“You’ve used the word ‘reimbursement’ several times,” said Board Member Mike Byers. “Does that mean the cost has to be incurred by the tenant and then they’re reimbursed?”

“If the tenant doesn’t have the means to pay that up front, we can pay TWSA directly,” said Day.

However, there is a caveat. While TWSA fees are reimbursable under DOT policy, the DOT won’t necessarily be beating the bushes to get business owners to request those reimbursements.

“We guide them through as much as we can, but each replacement site is different,” said Day.

Right-of-way agents will talk with business owners and go through the relocation brochure with them, but ultimately, said Day, “it is their responsibility to find out what is required for their new replacement site.”

According to estimates released in July, right-of-way acquisition for the project is expected to cost $49.7 million, and construction will cost an additional $40 million. With most projects coming in 10 to 15 percent over the estimated cost, the actual construction cost will likely be closer to $50 million, Division Engineer Brian Burch said this summer. While the DOT has already started acquiring some properties associated with the project, right-of-way acquisition is set to begin in earnest in January, with construction starting in early 2023.

Final road plans are expected early in 2020, said Day. They’ll be complete once Duke Energy submits its utility plans. New utility lines will be installed above-ground, not below-ground as discussed earlier on — below-ground lines would cost an estimated $7 million per mile.