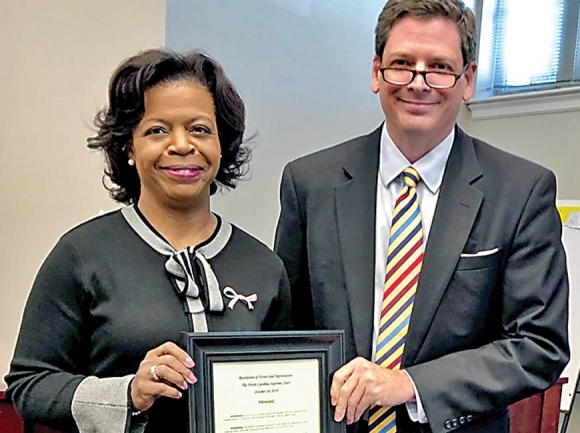 The small room of the Democratic headquarters for Haywood County was packed Oct. 31 for a speech by the Chief Justice of the North Carolina Supreme Court Cheri Beasley.

Beasley has served on the N.C. Supreme Court since 2012 and was appointed as chief justice by Gov. Roy Cooper in March 2019. She is seeking re-election in 2020.

In the bulk of her speech to Democrats of Haywood County, Beasley outlined initiatives she is seeking to implement into the court system. The School Justice Partnership is an effort on the part of school systems and the court system to reduce the number of suspensions, expulsions and referrals to the justice system. This is a vital component to North Carolina’s Raise the Age Legislation. North Carolina was the last state to mandate that 16- and 17-year-olds will not be automatically charged as adults. Early results of increasing communication and awareness between schools and courts show significant decreases in referrals to juvenile court as well as increases in graduation rates.

Another important aspect of increasing access to the courts that Beasley supports is the Faith Justice Partnership. This program brings faith and justice leaders together to use houses of worship, often vacant for many days throughout the week, to host driver’s license restoration clinics and expungement clinics. These are both technicalities that people fall behind on, which can lead to an accumulation of unnecessary fees. More than one million North Carolinians have had their driver’s licenses revoked for the inability to pay fines or show up for court. These clinics provide more localized access for people who often can’t get to courthouses or who are unfamiliar with navigating their bureaucracies.

Beasley also highlighted another major issue facing every county in North Carolina, the opioid crisis. By expanding the availability of recovery courts in each county, Beasley says, the court system can also be a part of the road to recovery out of this public health crisis. Similar to the School Justice partnership and the Faith Justice Partnership, the drug (or recovery) courts are a partnership between health care, rehabilitation systems and the court system. Recovery courts are a separate court where instead of simply imprisoning people with addiction, the court works collaboratively with treatment providers, social services and mental health specialists to benefit the participant. This not only reduces crime, but, more importantly, effects real change in the lives of addicts.

Another way Beasley intends to make the courts more accessible to more people is by modernizing technology. Updating software will make work easier and more efficient for court workers, as well as more available to those moving through the court system. In a day and age when people can pay utility bills and nearly everything else online, Beasley thinks residents should be able to pay civil court costs online too. This will especially make a difference to citizens in rural communities, where the courthouse can be several miles away and public transportation nonexistent.

Beasley fed off the enthusiasm shown to her by the Democratic party in their headquarters. She ended her speech by reminding attendees not to forget the judges when they went to the ballot box and asked that Haywood citizens let her know if she can be of service.