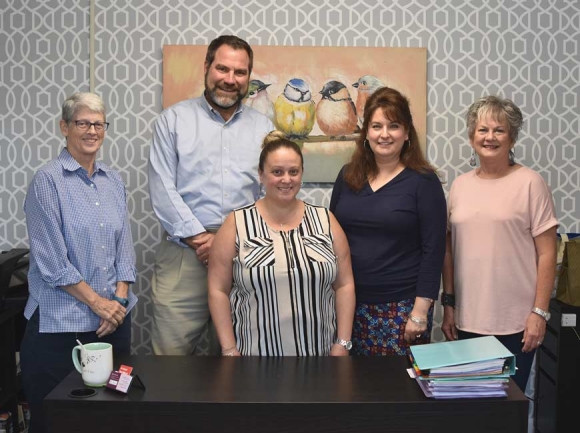 With victim advocate Ruby Lawrence in the center, board members Mary Ann Lochner (from left), Bob Cochran, Heather Baker and Marsha Lee Baker stand in the office of Jackson County’s Center for Domestic Peace, which operates in partnership with REACH of Macon County. Holly Kays photo

The Center for Domestic Peace — the successor to REACH of Jackson County — is hoping to take over domestic violence services in Jackson County by next summer. There’s still a long way to go to meet that goal, but board members say that getting the organization on its feet is a vital step toward addressing the issue locally.

“It’s really not the same for one county to try to serve two counties, as they’ve been doing for the last seven years,” said Bob Cochran, a board member for the CDP. “It’s just a stretch, and we really need our own support locally for the Center for Domestic Peace.”

In order to qualify for the state funding that would compose a critical percentage of the budget, should the organization become independent, the CDP must meet a set of milestones to prove its ability to put the money to good use. Most notably, it must have two full-time employees — though the organization has set itself a goal of three — and a hotline that’s operational 24/7.

“The dilemma that we’re in is chicken and egg, kind of, because until we meet certain operational milestones we’re not eligible for that funding,” said Mary Ann Lochner, also a CDP board member. Absent the funding, it’s hard to meet those milestones.

The CDP’s current operating budget totals about $54,000, but that number needs to reach $200,000 before it can take over services. Once independent, it would likely receive about $100,000 in state and county money, and the center currently has about $60,000 in other grant funds. But that means an additional $30,000 will need to come through donations and fundraising — right now, that number sits around $10,000. Additionally, the organization would need about $50,000 in the bank to survive the ebbs and flows of grant disbursements. The CDP must fundrais $30,000 to $80,000 by July 1.

However, it has made significant progress. The CDP currently has funding to support two fulltime employees — though one position is currently vacant — and the hotline is in place.

Independence will allow the CDP to better address the need in Jackson County, said Board Member Heather Baker. Despite Macon’s best efforts, it’s hard to reach across county lines and make the people who need the services understand that, despite the name, Macon is there to serve them too.

In 2017, Macon County served 169 Jackson County clients, and in 2018 that figure rose to 228 as REACH continued to publicize its available services. Having a standalone agency focused exclusively on Jackson County would only boost that trend, said Baker.

“When they see REACH of Macon County as the agency, it’s confusing,” she said. “They don’t necessarily know that they’re serving Jackson County.”

Geography is also an issue. At times, Jackson County victims fill up half the rooms in Macon County’s shelter — 56 Jackson County clients stayed there in 2017 and 31 in 2018 — but there are many more who need help but can’t leave the county. They have kids or jobs and lack the transportation to constantly be driving back and forth from Franklin. Last week, the CDP learned that it had received a $5,000 grant from the Great Smokies Health Foundation to put victims in hotel rooms or give them gas vouchers to help with the drive.

Jackson County does not have its own shelter — though that’s a goal for the long term — but it offers many other services. For the past year and a half, the office on Ridgeway Street has been open daily. People who need help can walk in on their own, call the hotline or get a referral from law enforcement, social services, legal aid or other partners. Ruby Lawrence, who serves as a victim advocate, walks victims through the process as they seek protective orders or even criminal charges against their abuser. She also works to connect victims to other services they may need, such as housing, therapy or social services for both adult and child victims.

As Cochran sees it, dealing with domestic violence in the community attacks a spectrum of other social ills too.

“You really only need to be violent every now and then, just to reinforce the fact that it can happen. And then you use everything else — the threats, the intimidation, the isolation, the other things,” said Cochran. “Physical violence is often rare, but the whole issue is power and control.”

October is Domestic Violence Awareness Month, and the CDP hopes it’s a month that ends not only with increased awareness about what domestic violence is and how to prevent or respond to it, but also with heightened community support for the CDP’s mission to combat it locally.

“Domestic violence hits every income level, hits every class of person, every type of person,” said Baker. “Anyone can find themselves in a domestic violence situation. There’s a stigma attached to it sometimes for folks that may have means, but it doesn’t mean that they’re any less victimized.”

The Center for Domestic Peace is open 9 a.m. to 5 p.m. Monday through Friday and located at 26 Ridgeway Street, Sylva N.C. 28779. A 24/7 hotline is available at 828.586.8969. The number also serves as the office line. Services are available in Spanish and English. Learn more at www.cdpjaxcountync.org.

Stick a fork in domestic violence

It’s Domestic Violence Awareness Month, and Jackson County’s advocacy agency, the Center for Domestic Peace, is raising money to help victims. Participating restaurants will donate portion of their proceeds on the chosen day to support the center.

Learn more or donate at www.cdpjaxcountync.org. Checks can also be mailed to Center for Domestic Peace, 26 Ridgeway Street, Sylva, N.C. 28779.