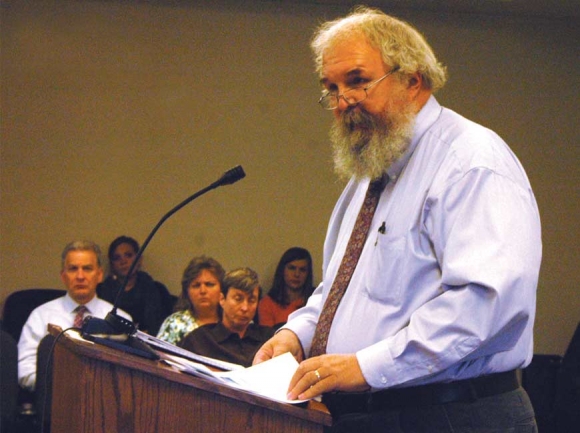 After more than seven years at the helm, Dan Harbaugh has left his role as executive director of the Tuckasiegee Water and Sewer Authority. His last day was Friday, Sept. 27, with the TWSA board hiring former Town of Sylva Public Works Director Dan Shaeffer to lead the organization temporarily.

“I appreciate the opportunity I’ve had to work with the TWSA board and staff over the past seven-plus years,” Harbaugh wrote in an Aug. 21 resignation letter. “I believe we’ve made some good progress on certain areas of the business, but much remains to be addressed. I wish nothing but good things for this organization going forward.”

Harbaugh and his wife are moving back to Elizabethtown, where they still own a home, to take care of Harbaugh’s 87-year-old mother. This month, Harbaugh will start a new job with the Fayetteville Public Works Commission, located 40 miles northeast of Elizabethtown.

“We’ll really miss him. He’s been really good for TWSA,” said Tracy Rodes, chair of the TWSA board.

Rodes said Harbaugh’s accomplishments in the executive director role were many, including absorbing the failing Whittier Sanitary District, leading efforts to build a second water treatment plant in Cashiers and spearheading the development of various new policies. He’s run a stable organization, with people retiring from TWSA but not generally leaving for other employment, which Rodes takes to mean that he’s been a good manager.

“If you ask him a question that he doesn’t know, he’ll say, ‘I’ll check on that and get back with you.’ And he’s one of the few people who really checks on that and really gets back with you,” said Rodes. “I really, really like that about him.”

TWSA published a job ad for the executive director’s position on its website Sept. 26, and Rodes said the board plans to publish the ad in trade publications across a four-state area. Rather than selecting a subcommittee to conduct the search, the entire board will be involved in the process, said Rodes. They will start reviewing applications Nov. 1 and continue taking submissions until the position is filled.

The hiring timeline will depend on the publication dates of the professional journals where the advertisement will be printed, the number and quality of applications received and the chosen candidate’s commitment to his or her existing job. However, said Rodes, she hopes to have someone new on board within five months.

TWSA is looking for somebody with a four-year degree and/or  “considerable” supervisory experience with a local governmental organization — preferably in a utility environment — possession of N.C. water and wastewater operator certificates and a graduate degree in public administration or a related field.

TWSA employs 30 people, with the executive director managing an operating budget of $4.88 million and a capital improvements plan budget of $17.9 million.

The board doesn’t foresee hiring Shaeffer for the permanent job, said Rodes, but he’s the perfect choice for the temporary role. They interviewed several candidates for interim director, but most of them only wanted to work three days a week at $70 an hour or so, with some requesting a vehicle and cell phone as well.

“We really need somebody in there every day,” said Rodes. “Dan had the familiarity with the projects going forward, and he’s local and willing to be in the building at various sites five days a week. That fit more what we needed.”

Shaeffer spent nearly 20 years with the Town of Sylva before retiring this spring. The N.C. 107 project will be a big focus for TWSA in the months ahead, as it concerns utility relocations and upgrades as well as impacts to customers. Due to his recent service with the town, Shaeffer is quite familiar with the project. In the public works role, he often had to work with TWSA.

Shaeffer will be paid $50 per hour and is expected to work about three-quarter time, though exact hours will be flexible depending on need.

“I’m confident that he can do what we need him to do until we find somebody,” said Rodes.

However, she said, it’s imperative that the board prioritize the hiring process to find a permanent director as soon as possible.

“We don’t need to lose a lot of time on our projects,” she said.