By Christopher A. Cooper and H. Gibbs Knotts

A recent survey conducted by the Western Carolina University Public Policy Institute and The Smoky Mountain News, however, suggests that Jackson County resembles a refuge for conservative Democrats. Today almost as many Democrats in Jackson County identify as conservatives as liberals (23 percent compared to 30 percent — the remainder are moderates). These numbers are even more striking when compared to an analysis of Republicans in the county.  Two-thirds of Republicans in the WCU PPI/SMN poll claim to be conservatives, compared to less than 4 percent who are self-proclaimed liberals. The message is clear: Democrats do not mind being called conservatives, but almost no Republicans in our county want to be called liberal.

So what does this mean for political candidates in Jackson County? First — it pays to be a Democrat. Results of the survey as well as analysis of voter registration records in Jackson County clearly indicate that there are many more Democrats than Republicans residing in the county. In the WCU PPI/SMN survey, 45 percent of the respondents claim to be Democrats, compared to 32 percent who identify as independents and 24 percent who consider themselves Republicans. The actual voter registration numbers are identical for Democrats, but indicate slightly higher percentage of registered Republicans.

Despite these positive numbers for Democrats, aspiring politicians in this county who align themselves with the Nancy Pelosi/Harry Reid wing of the Democratic Party will find little support. Nationally, Republicans tend to be conservative, and Democrats are most often liberal. As we suggested above, however, few Democrats in this county consider themselves liberals. Most are moderates, and almost a quarter are conservatives. Among members of all parties, only 18 percent are liberals, compared to 42 percent who are moderates and 40 percent who are conservatives.

Given these trends, it is perhaps not surprising that more than half of the respondents in the WCU PPI/SMN survey who expressed an opinion on Democratic Congressman Heath Shuler hold a favorable view of him (54 percent favorable, compared to 46 percent unfavorable). Shuler has distanced himself from the Pelosi/Reid wing of the Democratic Party by casting votes against the healthcare plan and the stimulus package. 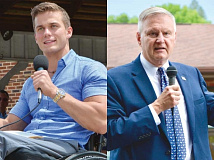 In fact, an independent analysis of roll-call votes in the House by political scientist Keith Poole finds that Shuler is the fifth most conservative Democrat in the House. Perhaps as a result, further analyses of Jackson County survey data reveal that Democrats are no more likely to approve of Shuler than Republicans, and conservatives are more likely to support him than liberals.    This trend is most evident at the extremes where twice as many conservative Republicans as liberal Democrats approve of Shuler (60 percent to 30 percent).

All of this portends well for Shuler this fall, at least in this county. Sure he is not popular with the liberal wing of the Democratic Party, but fortunately for Shuler, this is a fairly small part of the Jackson County electorate. Moderate and conservative voters of both parties as well as independents approve of Shuler in fairly high numbers. A lot can happen between now and November, but Heath Shuler can probably rest fairly comfortably in the conservative Democratic refuge of Jackson County.

Christopher A. Cooper and H. Gibbs Knotts are both Associate Professors of Political Science and Public Affairs at Western Carolina University where Knotts also serves as Department Head and Cooper directs the Public Policy Institute.