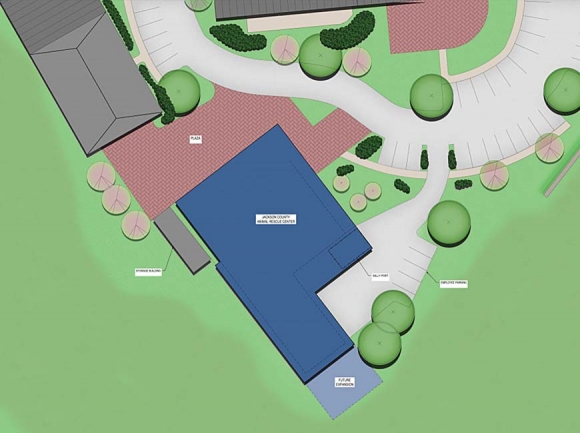 Plans are progressing for a new animal shelter in Jackson County, the first new construction to be completed in the $7.65 million vision for a revamped Green Energy Park campus.

In the Sept. 17 meeting, the project’s lead architect Cary Perkins, of the firm McMillan Pazdan Smith, gave commissioners an overview of how the building’s layout might end up.

A brick plaza would separate the animal shelter and the innovation center, a yet-to-be-constructed building that would be operated by Western Carolina University and provide a place for students and community members to combine art with engineering and design to develop new creations. The plaza would hook around to the main entrance through a public lobby, from which would branch off a large community room, and an office for the animal adoption nonprofit ARF. A third room could be used either as meeting space or for storage.

A pair of blocks supplying back-end functions like laundry, food storage, electrical equipment and staff rooms would run down the center of the building, with three pods of dog kennels holding 20 dogs apiece to the left when walking in from the lobby.

“There have been a lot of studies about the selection process,” Perkins told commissioners. “When people go in to select a new pet, if they’re overwhelmed by too many choices, they can’t make a decision. Some of the more successful shelters and humane societies limit that selection, so you would put fewer animals in a room.”

Splitting the dogs into three separate areas helps achieve that goal, and it also gives staff flexibility. Staff could, for instance, say that all the animals in a particular room are 50 percent off that day, or say that a particular room is closed that day. They could organize the dogs by size, or type.

The plan also includes four cat rooms, positioned to the right when walking in from the lobby. These rooms are situated along the brick plaza near the innovation center, with the windows allowing passerby to check out the felines inside.

“Even when the shelter is closed, people could peek in there and see that there’s animals in there,” said Perkins. “It’s easier to do with cats than dogs — it’s quieter to peek in on cats.”

Beside the dog area is the building’s intake and holding section. The schematic presented to commissioners includes 12 kennels for short-term intake holding, as well as rooms for cat isolation and dog isolation. There is also a grooming room and an intake exam room.

The plan offers options for expansion in the future, with designated areas to expand both the dog area and the cat area, should more space be required in the years ahead.

The Green Energy Park master plan used $3 million as the placeholder number for animal shelter construction, but the exact cost will depend on several different factors. Perkins said she’ll be pricing out various structural support systems for commissioners to choose from. If costs come in too high, the plan offers an option to reduce square footage by making the community room and lobby smaller.

The animal shelter will be built on the site currently occupied by the Green Energy Park office, and commissioners had hoped that the building’s existing steel frame could be reused in the new construction. Unfortunately, said Perkins, she can’t recommend that the county pursue that option. The structure is not in mint condition — it’s missing some pieces, other pieces need repair and still others need replacing. Those fixes are difficult to do with the structure in place, so making them would not only cost money, it would drag out the construction timeline.

Additionally, said Perkins, building the animal shelter will require cutting into the concrete slab to install plumbing and other infrastructure.

“Once you cut out that slab, it starts to compromise the pre-engineered metal building,” she said.

When complete, the remodeled Green Energy Park campus would include not only the animal shelter and innovation center, but also a dog park, walking path and event space, in addition to existing Green Energy Park functions. The county is currently under contract for a 3.97-acre property on Haywood Road in Dillsboro, where it plans to relocate the staffed recycling center currently at the top of the Green Energy Park property. Doing so would reduce vehicular traffic through the area and make the campus more pedestrian-friendly.