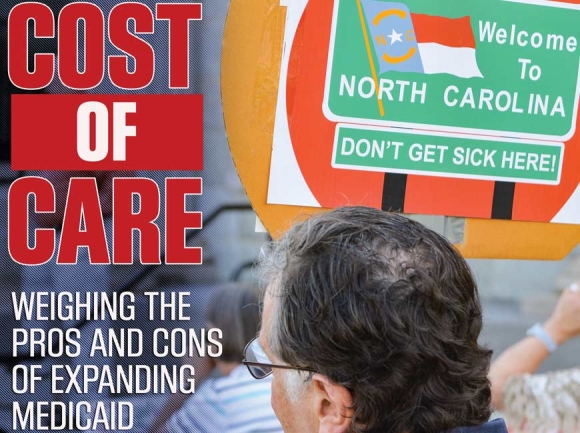 Roosevelt had even tried to create something similar while advocating for his Social Security Act of 1935, but had to drop the health care provisions to ensure passage of the Act itself.

The 1965 legislation passed by a Democrat-majority House and Senate and signed by Johnson is self-described as “an act to provide a hospital insurance program for the aged under the Social Security Act [of 1935], with a supplementary medical benefits program and an expanded program of medical assistance.“

Today, more than one in five Americans, or about 73 million people, have health care coverage through Medicaid, which is funded by taxpayers from both the federal and state levels.

Participation in Medicaid by states is completely optional, although all 50 do, in part because of substantial matching funds from the federal government.

In fiscal year 2017, total Medicaid funding amounted to more than $550 billion, with 62 percent of that cost borne by the feds, and 38 percent by the states.

The amount of federal funding actually disbursed to each state is determined by something called Federal Medical Assistance Percentage, which is different for each state and varies based on per capita income and poverty levels, among other things.

The average FMAP is 57 percent, but that number can range from as low as 50 percent in high-income states like Alaska, California and Colorado to as much as 76.98 percent in low-income Mississippi. North Carolina’s fiscal year 2020 FMAP is 67.03 percent.

Although states administer their own Medicaid programs there are certain basic federal guidelines they must adhere to and basic services they must make available, including hospital, lab, nursing and X-ray services.

Then there are the optional benefits, which can be anything from physical therapy to personal care, dentistry to hospice. North Carolina’s options include chiropractic services, podiatry and optometry.

Medicaid is not available to undocumented immigrants, and is not generally available to non-citizens, except for legal immigrants who resided in the United States on or before Aug. 22, 1996, and that’s only if the state has allowed it.

Legal immigrants who arrived after 1996 cannot apply for Medicaid benefits during their first five years of residency, except for those who are here on humanitarian grounds — fleeing genocide, war, persecution or human trafficking and the like.

In North Carolina, Medicaid is available to people under 21 or over 65 years of age, and to those who are blind, have a disability or are in need of long-term care. Eligibility is also determined by household income as it relates to the federal poverty level.

Once children turn 19, the monthly income limits drop precipitously — between $434 a month for one person and $744 a month for a family of four.

Those guidelines leave the bulk of the U.S. population unqualified to take advantage of Medicaid, so in 2014, the Affordable Care Act gave states the authority to expand Medicaid to people under 65.

That authority also came with a 100 percent federal funding match for the expansion group in states that expanded Medicaid from 2014 through 2016.

To date, 37 states have expanded Medicaid. North Carolina is not one of them. In those states that have not expanded Medicaid, more than 2.5 million people who make too much to qualify but not enough for other health care coverage remain in the so-called “coverage gap,” with almost 10 percent of those in North Carolina.

Medicaid expansion in North Carolina is estimated to cost about $600 million a year for the next 10 years, if implemented in 2020. By comparison, North Carolina’s 2018-19 general fund budget was just under $24 billion.

Stats in this report come from a variety of sources including The John Locke Foundation, Centers for Medicare and Medicaid Services, The Henry J. Kaiser Family Foundation and the State of North Carolina.