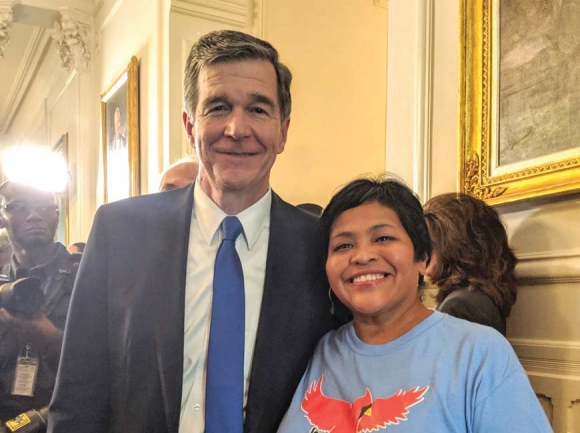 “I felt like all my organs started to fail me at once. I was just exhausted all the time and just couldn’t function. I slept all the time and cried all the time — experiencing severe mood swings and I had horrible dry mouth and canker sores on my tongue. I stopped eating like I used to and within eight months I dropped 50 pounds,” she said.

McBane took the money she had saved for bills and her sister loaned her some money so she could go see a doctor. She saw three specialists in three months and paid $400 to $500 upfront cost per visit but not one doctor could give her any answers.

“The last doctor I saw was a 70-year-old man — an ear, nose and throat specialist — who gave me five minutes of his time before telling me he didn’t know what was wrong and that he could send me to the hospital for more tests. I was just floored,” she said.

A neighbor finally recommended McBane call the Good Samaritan Clinic, which at the time had just been taken over by Blue Ridge Health. The clinic sees patients regardless of their ability to pay or insurance status, however, the waiting list can be lengthy. She had to wait a few weeks to be seen but once she did, it only took the staff about 5 minutes of hearing her symptoms to realize she probably had type 2 diabetes. The staff also couldn’t believe the other doctors she’d seen hadn’t said anything to her about her high blood sugar. A normal level is between 70 to 120 and McBane’s was at 500 the last time she had been admitted to the emergency room — levels that high can send someone into a coma.

“Within those five minutes, I just burst into tears. My first appointment with Blue Ridge Health lasted three hours but I would have stayed there for six if I needed to because they were the only people willing to help me,” she said. “They are my primary means of health care right now.”

Within a few days of taking medication to control the diabetes, McBane started to feel like herself again, but she’s still struggling to afford the medications she needs without insurance. She can get a pill form of the meds she needs for $4 a month, but suffered from some of its many side effects. She’s fighting to get approved for Trulicity instead, a weekly insulin injection that costs $700 per injection.

About the same time McBane was dealing with all her medical issues, she got a visit from community organizers from Down Home NC, a statewide nonprofit group focusing on providing a voice for poor working people in rural communities. While conducting surveys with local residents to see what issues are most important to them, Down Home organizers were the first to hear McBane’s personal story. They wouldn’t be the last. McBane was so taken aback that anyone was interested in knowing the struggles she had been through that she became a member and now works for the organization as a community organizer.

“I didn’t realize how damaged our systems are until I went through everything I went through and how criminal their actions are to profit off the backs of poor and working class people that only want to pursue life and liberty,” she said. “People are dying and it’s something that is an easy fix if we have regular preventative care.”

McBane was among a select few North Carolinians chosen to stand next to Gov. Roy Cooper in Raleigh as he announced his decision to veto the state budget because it didn’t prioritize Medicaid expansion. She brought along with her 1,200 signatures she helped collect that supporting Cooper’s veto action and Medicaid expansion.

Todd Zimmer, co-founder of Down Home NC, said McBane’s story is one of so many people across the state struggling with the cost of health care and limited access to care.

“Every year we conduct large-scale listening surveys where we knock on thousands of doors and ask residents what issues they’re struggling with and what solutions they want to see,” he said. “Consistently from the get go accessing health care has been the number one problem low-income residents have reported and expanding Medicaid is the top solution so that’s been our top priority.”

The nonprofit has spent the last year organizing in the communities, holding town hall meetings to educate residents, holding vigils and rallies to talk about Medicaid and lobbying state legislators on the many benefits of expansion. Besides being the right thing to do, Zimmer said, expanding Medicaid would be good for the economy.

“The latest figures show 645,000 North Carolinians would gain coverage under Medicaid expansion, which is huge,” he said. “Jobs would be created, which would mean more tax revenue for counties and it would be a boon to rural hospitals.”

Zimmer said Down Home members have really been trying to make legislators aware of the true cost of people not being able to access affordable health care. They’ve met with Rep. Michele Presnell, R-Burnsville, Sen. Jim Davis, R-Franklin, and Rep. Joe Sam Queen, D-Waynesville. While Queen has been a major advocate for Medicaid expansion, he said Republicans haven’t been as receptive.

“To be frank, our members are pretty frustrated and disheartened about the response they’ve received from Sen. Davis and Rep. Presnell — they feel like they both really failed in a crucial leadership test by not finding solutions for their constituents,” Zimmer said. “Medicaid expansion came before the General Assembly in 2012 — they’ve had seven years to find a solution and they haven’t put forward a compromise or anything.”

“That’s just not true — the vast majority of people are working but don’t make enough to qualify like construction workers and servers,” he said. “And when people defer medical care they get sick and then they can’t participate in the labor market.”

Zimmer said people in North Carolina are already paying for Medicaid expansion with their federal taxes, but since the state didn’t expand, those tax dollars are going to subsidize the cost of covering people in the states that did. A report released by the Cone Health Foundation stated that the state had already lost access to billions in federal dollars by not expanding in 2013.

“With expansion and extra revenue in the system, we would have more mental health professionals and more people able to access them. We have people inches away from care — all they need is for their representative to have some compassion and leadership,” he said.

It may be Republican legislators holding up expansion efforts, but Zimmer said Medicaid expansion is not a party line issue. He said many Down Home members and other residents surveyed identify as conservative but still want to see Medicaid expanded. Some of those conservative members were recently featured in a New York Times video report on the issue.