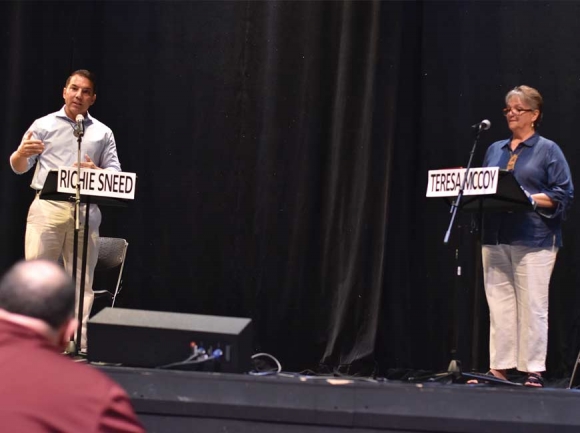 The debate was one in a series of events the newspaper hosted to give voters the chance to hear from candidates seeking their vote in the Tribal Council, chief, vice chief and school board races. Candidates were given a list of 12 questions to consider prior to the event, and moderator Robert Jumper, who is also editor of The One Feather, asked those questions along with questions submitted by community members attending the debate. Each candidate had three minutes per question to respond, with an additional one minute for follow-up.

During the principal chief’s debate held Thursday, June 27, candidates responded to a total of 20 questions, only some of which are represented here. A video of the entire debate is available at bit.ly/2Yp9KXG.

Do you think people incarcerated on drug charges should be required to do community service cleanup while they are in jail, including syringe pickup?

McCoy: “I take issue with the word ‘required.’ They’re already doing time because they’re incarcerated and they were been ordered to be there by a judge and they’ve already gone through the judicial system. I would prefer that they be allowed to volunteer.”

Such work opportunities would be a good thing, allowing inmates to get some fresh air, give back to the community and think about why they’re in jail to begin with. There are grants available to help with the cost of running such a program, which would add jobs within the current system. However, due to health risks not just anybody should be out there picking up dirty needles, though some may choose to receive the training necessary for that task.

Sneed: “I certainly support having prisoners on work detail. There’s many issues to look at first. We’ve consulted with other municipalities, and there’s a huge liability issue. It’s the reason why most municipalities are moving away from using work groups of prisoners. There’s personnel costs, there’s transportation costs, higher insurance costs, etc., but the most important factor we have to look at as tribal members is we currently have tribally owned businesses that we contract with to do roadside cleanup.”

Having inmates do roadside cleanup would take jobs from 20-30 tribal members currently employed to do that task, Sneed said. Since the tribe has the financial resources to pay those contracts, it doesn’t make sense to get rid of them. However, community service is an important tool in the criminal justice system, and many people charged with low-level offenses like simple possession would be best served with a community service sentence as opposed to incarceration.

What is your stance on discontinuing drug testing of EBCI tribal employees?

Sneed: “One of the things I did when I first got into office is I read a lot of case law on random drug testing, and the federal courts have made it plain that random drug testing is a violation of your Fourth Amendment rights, period. If there is no reasonable suspicion you should not have to be subjected to a test. We ran this through our AG’s office and with our attorneys and they concurred, so we changed the policy.”

Currently, random drug tests can be given to emergency service workers, operators of heavy equipment or other positions in which the public safety is at risk. Other than that, reasonable suspicion of illicit drug use is necessary for a test to be administered, Sneed said.

McCoy: “To me if you choose to use drugs, if you choose to come to work intoxicated, you are making a choice and you may want to just choose to stay home and do that. We have a serious substance abuse problem here on the Boundary, and when we talk out of one side saying we’re going to do something about that and then turn around and speak out of the other side saying we’re going to protect the ability to do that, we send a mixed message to everyone.”

Operators of heavy equipment aren’t the only ones for whom a mistake on the job due to drug use would be detrimental, McCoy said. It could be “catastrophic” if someone tasked with handling tribal finances, for example, misplaced a decimal or misrendered a number while intoxicated. All elected officials and tribal employees should be subject to random drug testing.

If the Catawba Indian Nation gets approved for a casino, what are your plans to help with any lost revenue?

McCoy: “The Catawba Nation is a federally recognized Indian tribe. Instead of going to war with the Catawba, I would have sat at the table and offered them some peace.”

It would have been more beneficial for Cherokee to craft an agreement with the Catawba wherein the Eastern Band gets a cut of the profits from any future Catawba casino and the Catawba help Cherokee in its fight to prevent the Lumbee Tribe, which is state-recognized, from gaining federal recognition. In regards to replacing any lost revenue, the tribe should look to Oklahoma’s Cherokee Nation, which gets most of its revenue from business projects through its tribal LLC. The EBCI recently launched an LLC of its own — the tribe should let it get to work, avoid political interference and see what happens.

Sneed: “I will fight this with my dying breath. The bottom line is this — what this bill seeks to do is it seeks to bypass the federal law and the federal process that we are subject to, that we have abided by.”

There is no provision under federal gaming law for the type of profit-sharing agreement McCoy proposed, and such an agreement would not come close to replacing the revenue the tribe could stand to lose if the Catawba were allowed to build their casino. The current administration has done “probably more than has been done to diversify in the last decade” and will continue to do that regardless of what happens with the Catawba situation.

What are your thoughts on cannabis and its economic potential for EBCI?

Sneed: “I do think there is an opportunity for us. I think the best first step we can take is venture into the hemp market because it’s wide open. There’s a lot of money to be made there and should the federal laws change, if we were already growing hemp commercially we would be well positioned to enter into that market.”

Any change to tribal law on medicinal or recreational marijuana should be done following thorough study and research. But laws are changing rapidly across the country, so future changes to federal law or laws of neighboring states will impact the Eastern Band. That’s why it was important to complete a feasibility study on the issue, so the tribe would have information on what the issues are and how it should respond, should the laws around the Qualla Boundary change.

McCoy: “I truly wish in the past several years our tribe had spent as much time talking about how to supply safe standard housing for those members who are in need of it and how to keep people from being hungry at night. We’ve not spent probably 15 minutes discussing those issues, but we’ve spent month after month after month and many tribal dollars trying to figure out a way to handle the hemp issue and to discuss the cannabis issue.”

Hemp is currently a possibility for Cherokee, though cannabis is not until the laws change. The benefits of medical marijuana are clear, but recreational marijuana is a whole other question — allowing either on the Qualla Boundary should be a referendum issue. However, the cannabis issue in general seems to have received a disproportionately large amount of attention from tribal government relative to other, more pressing matters.

Are you comfortable with the current levels of transparency in government? Do you support public access to all government budgets and procedural documents?

Most government actions, it seems, come with little or no accompanying information for the public to consider. If elected, all procedural documents and budgets — with the exception of specific salary information for tribal employees — would be made public. As an example of the current lack of transparency, McCoy said, earlier that day she had called the chief’s office and asked a staff member how much money the tribe had sent to its representatives in Congress, but that information was not provided.

Sneed: “We already have in tribal code that every tribal member has access to all public documents that the tribe has. Am I comfortable with the level of transparency we have? I don’t know an area where we don’t have transparency in our government.”

The Sneed administration has created a monthly report listing every contract approved and the dollar amount. Sneed is a great supporter of transparency in government and believes that Cherokee’s system provides more opportunity to participate in the governmental process than nearly anywhere else. It is “disingenuous” for McCoy to ask for information the day of a debate when there is a process outlined in law to receive that information.

Now that a state of emergency has been declared concerning the Cherokee language, what does this mean to you?

McCoy: “You can’t say ‘budget cut’ when it comes to your culture and your language.”

It’s sad to see how the Cherokee language is struggling, and saving it needs to be a priority. It should be all hands on deck to start recording “and not stop” the fluent speakers who do remain. The tribe should consider a law requiring all tribal employees to start learning the language. Saving the language and the culture that goes with it must be a community effort if it is to succeed.

Sneed: “It’s imperative that we begin to speak the language in the workplace and our homes if it’s going to survive.”

The Eastern Band should look to the Cherokee Nation in Oklahoma for inspiration when it comes to saving the language. Sneed supports a master’s apprentice program in which young people spend 40 hours a week with Cherokee-speaking elders and wants to see language offerings expand in Cherokee Central Schools, with more classes offered for community members as well.

Despite being a chief’s election year, turnout in June’s Primary Election was substantially lower than that in the 2017 Primary Election, in which no chief’s offices were on the ballot.

By comparison, overall voter turnout in the 2017 Primary Election was 43 percent, with community turnout rates wavering between 26 and 47 percent. Participation was similar to that in the 2015 Primary Election, which was the last year with a chief’s election. Though voter turnout figures for 2015 were not available as of press time, the number of votes cast in that primary election was just 1 percent higher than the number cast in the 2017 primary.

This year’s turnout rate was about 4 percent lower than the rate in 2017.

Turnout was a problem in May 2018, when a referendum election was held asking voters to OK a tribally owned beer, wine and liquor store. The referendum required at least a 30 percent voter turnout to be considered valid, but only 25.56 percent of registered voters came out to vote.