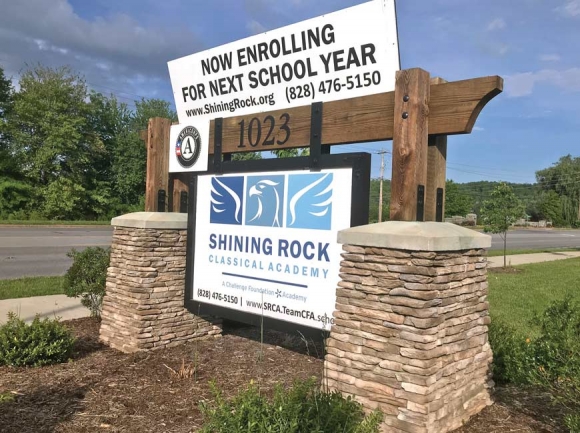 Transparency and accountability have long been concerns at Shining Rock Classical Academy — since before the troubled taxpayer-funded school even opened its doors in 2015 — and if recent events are any indication, new leadership at the school doesn’t seem interested in doing anything to change that.

After a meeting on June 19, in which parents decried a lack of transparency, newly-appointed Board Chair Michelle Haynes refused to answer questions from The Smoky Mountain News, insisting they be emailed instead. She never responded.

Then after the June 27 meeting during which the board offered Joshua Morgan a contract that would make him the new head of school, Haynes refused to provide a copy of the contract to SMN, instead saying she’d email it. That happened six days later, after both Shining Rock and Morgan had executed it and before the public got a chance to look at it.

That same night, SMN again emailed Haynes a list of questions, similar to the ones she refused to answer after the June 19 meeting. She never responded.

Those questions pertained to the continuing decline in Shining Rock’s test scores, budgeting decisions that steer money away from administrative and instructional help in favor of a public relations position, lower projected enrollment, and the school’s latest transparency gaffe — a June 6 illegal meeting held to dismiss grievances filed against Morgan:

• Who is the designated staff person or board member tasked with publishing required notices to sunshine lists, your website and physically posting to the building?

• How will you work to ensure that another public meeting notice violation does not happen in the future?

• Have you or anyone else on the board ever received any formal training in closed session laws, public records laws or meeting notice laws?

• Actions taken in an illegal meeting, such as the one you held on June 6, can be invalidated by court order. What’s your plan to ensure that this does not happen?

• The budget Shining Rock passed last week, according to one board member, is based on lower enrollment projections than last year. Why do you think that is? Is it because of low test scores? The grievances against Morgan? Something else?

• Another statement made during budget discussion said the school needs another administrator, but the budget doesn’t include funds for one. Why not?

• Another budget statement made was that the school would budget for a PR/Marketing person. Why do you think this position is necessary?

• In light of low test scores, a projected decline in enrollment and the proclaimed need for another administrator, why is hiring a PR person more of a priority than hiring an administrator or directing those funds to other instructional help?

Even Morgan, during a May 10 interview with SMN — his first, last and only on-record conversation with SMN — stressed the importance of building trust and healthy relationships with the community at large, as well as the media.

“I think another piece of it is, from a stability standpoint, foster that community, foster that piece of trust, and even things like this [interview], media and having a good rapport with all stakeholders,” he said. “You have to have good relationships, because if you don’t have those good relationships, it can be very, very challenging for everyone involved, and it doesn’t have to be that way.”

The night Morgan was offered a contract by the board to become Shining Rock’s new head of school, Morgan, like Haynes, also refused to answer questions and asked that they be emailed instead.

The same unanswered questions posed by SMN to Haynes were also emailed to Morgan June 27. As of press time on July 2, a confirmation email was received from the school indicating they’d been received, but no responses were ever provided.