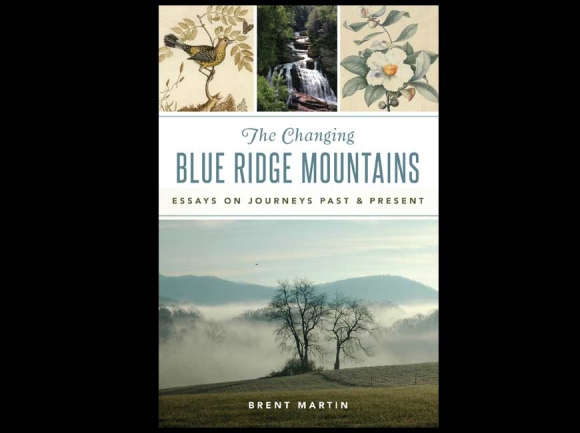 In a beautifully designed book by The History Press based in Charleston and in chapters with titles such as “When the Heart Can No Longer Say Home,” “Thinking Like an Osprey,” and “Modern Appalachia and the Death of the Sublime,” he takes us on a  journey to the headwaters of Big Snowbird Creek in Graham County where there is an old wagon road and an Indian hunting camp, to Cobb County, Georgia, to locate an ancient spring, and to the Great Smoky Mountains National Park in search of rare wild camellias.

With interior accolades from some of the most heralded writers in the region such as Charles Frazier, Wayne Caldwell, George Ellison, John Lane and Janisse Ray, and as someone who has spent the majority of his life in the Southern Appalachians while working for environmental organizations such as The Wilderness Society, The Little Tennessee Land Trust, Georgia ForestWatch, and most recently his own Alarka Expeditions, Brent Martin knows this bioregion, this landscape and its cultures through history. In short, he cares about the future of these mountains and the plants, animals and people that inhabit these ancient hills.

In this timeline of essays, he serves as a modern-day William Bartram documenting some of Western North Carolina’s wildest and most remote places. As John Lane writes in his endorsement for the book: “Brent Martin is like William Bartram, striding into the South’s great back country without a speck of doubt it’s still there and it’s our job to save it.” Or as Catherine Reid adds: “Brent Martin hears in the writings of William Bartram the howls and whispers from the wild world, and reasons to hope, reasons to hold on.” In his Foreword, George Ellison compares Martin’s writing in this book to that of  Thomas Hardy and Emily Dickinson, which may be a stretch for some, but otherwise Martin’s regionally authentic, compassionate and poetic prose is written clearly in a travel-writing style that puts us right in the boat with him or along the trail or navigating the understory of dense forestland. Acting as our literary travel guide, here, one couldn’t ask for a more informative and entertaining trip

From the books beginning chapter on geographic history and preservation, Martin leads us out onto the trail. “It is another dark and freezing winter night here in the old Doc Clark home on West Branch, and after several days of rain, I can hear the stream’s bold and lonely babble through our bedroom window. It is the season when we are prone to question our decisions and our ability to persevere. The landscape, empty of vegetation, reveals itself in stark shadows and light. I have been reading William Bartram’s Travels again tonight, focusing on his eighteenth-century description of this area and situating our late nineteenth-century home into that landscape. Bartram passed through our valley less than a mile from our front door. Now I lie in bed and imagine this mountain hollow as it might have appeared 20,000 years ago — an ice age boreal forest of spruce fir, an ecotone resembling something closer to Canada today. I think back further to the geological uplift that formed these mountains over 300 million years ago, enormous mountains many thousands of feet higher than they are now, slowly eroding at a pace we are not capable of conceptualizing. Slowly grinding evolution, pathless and without people for millions and millions of years. I feel that alone.”

In one of my favorite chapters in this book (having myself grown up on Snowbird Creek in Graham County), Martin writes: “We walk the manicured tourist trail that is a short walk to the top of Hooper Bald, searching as we go for the Kings Meadow trailhead, our path down to the headwaters of Big Snowbird Creek. When we find what we think is the trail, the sign for it has been ripped or shot off its post. The trail is faint, and we pick our way down over fallen birches, losing the trail occasionally and unsure we are even on it until we at last come to a crossroads where a sign survives, only due to its inaccessibility. Here we at last get onto the Mitchell Lick Trail, the old wagon road that George Moore brought his wild game in on, which appears to be rarely used by hikers, though showing signs of illegal off-road vehicle use. Along the way, we cross a high-elevation stream where at some point there was likely an Indian hunting camp. Worked quartz flakes lie about in clusters, and I pocket several for souvenirs from our trip.”

We eventually make our way toward the end of the book to Three Forks in the Great Smoky Mountains National Park by way of a somewhat precipitous route along Breakneck Ridge as Martin writes in his journal notes from the trip: “When we finally made it to Three Forks on our second attempt, I had felt a sense of timelessness like I had never experienced before — the forest primeval, untouched by senseless modern human hands. It is fairy-tale-like in its appearance, Jurassic in its feel. We had crawled, slid and prayed our way down in several hours, wondering all along how we were going to turn around and crawl our way back out.” And it is there that I will leave you, hoping that these few paragraphs from The Changing Blue Ridge Mountains (Essays on Journeys Past and Present)  will inspire you to accompany Brent Martin on the other journeys that he has taken in the past or ... in person with Alarka Expeditions  in the future. And that you will want, as Charles Frazier writes in his endorsement of the book “to read this beautifully written and deeply thought-provoking book.”

Thomas Crowe is a regular contributor to Smoky Mountain News. His book The End of Eden: Writings of an Environmental Activist was published by Wind Publications in 2008.  He can be reached at This email address is being protected from spambots. You need JavaScript enabled to view it.