Improvements to showcase one of Waynesville’s most recognizable landmarks 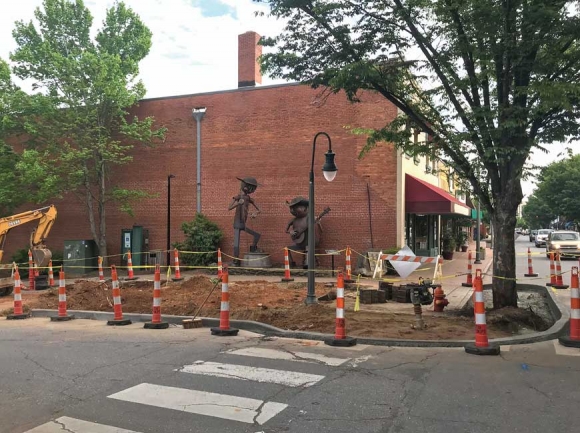 It’s long been a common sight, the scores of visitors to Waynesville’s trendy Main Street shopping district snapping selfies in front of two giant metal sculptures located on the corner of Main and Miller streets.

Those pictures, though, are about to become a lot more clear with streetscaping improvements that will make Stefan “Steebo” Bonitz’s “Troubadours” more visible to passersby and more accessible to those who like to while away the hours contemplating the figures — one playing a banjo, and the other, a washtub bass — in the town’s tiny Miller Street Garden.

“Basically you have these tour groups with 15 people,” said Waynesville Town Manager Rob Hites, “and they all get shoved together. These improvements make it basically a mini-park.”

Work began on the site this week, thanks to a grant in the amount of $14,280 from The Fund of Haywood County that will not only expand the tiny urban park at the center of town, but also update the landscaping and layout of the park.

The change will also rid the town of a troublesome “parking space” on Main Street where motorists would block the fire hydrant.

“That was always an illegal parking space,” said Hites. “People have been parking there for years, blocking the hydrant, so we took [the space] away.”

Not among the improvements is a 4-foot tall hedge that was proposed, which would have surrounded the small courtyard, where benches will be placed.

“We want people to see the artwork from the street, and we realize that at 4 feet, if you’re sitting in a car, it’s covered,” Hites said. “In fact, one thing you notice right now, when you drive down the street is, you can see them. You don’t have to be right up on them.”

Hites said the work had begun quickly after the town approved the layout, created by Nelson Byrd Woltz Landscape Architects, so it could be completed well in advance of tourist season.