This must be the place: The wheels on the track go ‘round and ‘round 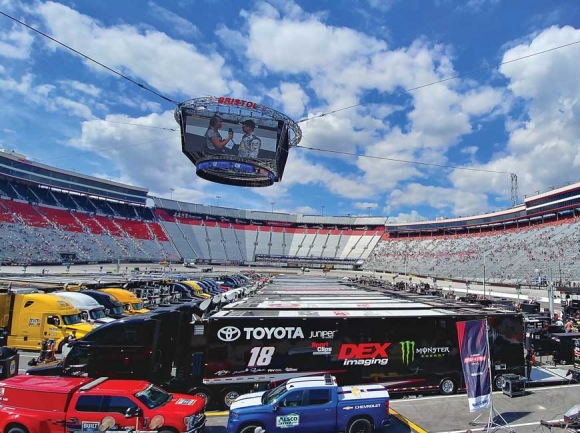 Pulling off US-11E and into some random person’s backyard last Saturday afternoon, I handed the woman $10 and was directed to park my truck along the tree line behind the rickety garage.

Stepping out of the vehicle, I could hear the sounds of 110-mph stock cars roaring around the half-mile track across the street at the Bristol Motor Speedway — “The Last Great Colosseum” — in the rolling hills of Eastern Tennessee.

In terms of my attitude toward attending the ALSCO 300 (NASCAR Xfinity Series), my fun level was “in it to win it,” as seen by my attire of a trucker hat, party shirt, muddy boots and a pair of Daisy Dukes (a Christmas gag gift from a co-worker that has now turned into a wardrobe option).

Popping a cold domestic beer, I saluted the unknown day, gazing over at the enormous structure with only one thought in mind — “It’s Bristol, baby.” Approaching the speedway in the blazing hot spring sunshine, the noise of the stock cars became deafening, the smell of burning rubber and spent fuel radiating into the air.

My love and relationship with stock car racing goes back as far as I can remember. Raised in Upstate New York, I remember being a young kid and going with my father to the local dirt track, the Airborne Speedway, which was, and remains, one of the oldest continuously run racetracks in the country.

Racing has always been a part of my dad’s side of the family. He was a child of the 1940s and 1950s, an era when car racing (and NASCAR) came to fruition. And he would tell me stories of being a teenager in the late 1950s, climbing over the fence in the woods behind Airborne and sneaking into the races.

Back then, my dad’s uncle owned a mechanic’s garage (Bill’s Body Shop, which still is in operation) in his hometown of Peru, New York. My father and his cousins would rumble through the back fields in those ironclad tanks that were American cars of the 1950s, yanking the steering wheel and flying across wide-open cornfields.

That garage also sponsored a racing team in those early days, and did so even when I would find myself in the early 1990s as a kid in the pit at Airborne, standing there alongside my dad, cheering on the family’s team as the cars spit mud all over the track, the smell of gasoline and oil wafting through the warm summer night air.

Another reason I was big into racing is because of my Uncle Bobby. A retired Navy veteran from the Vietnam War, Uncle Bobby is, well, a car freak, to say the least. He’d show up to my parent’s house in some fast sports car or truck decked out with all the bells and whistles. And he’d always take me for a ride, my favorite being his 5.0L V8 1992 Ford Thunderbird (brand new at the time), the gas pedal pushed to the floor on some backcountry road — lord, that thing was a rocket.

And I looked forward to watching racing with my Uncle Bobby. He lived in a mobile home way out in the country side of Schuyler Falls, New York. Every Sunday, my dad would take me for breakfast at the local diner, then we’d motor over to Uncle Bobby’s to say hello. Like clockwork, there’d be NASCAR on the large TV in the corner, my uncle sitting in the recliner, a big smile on his face as we’d walk in, his voice saying, “I figured you would come by today.”

So, it meant a lot — more than I initially realized when I decided to go — when I stepped foot in the Bristol Motor Speedway. I look around and noticed all those legendary names of my youth now emblazoned on the walls surrounding the track — Earnhardt, Waltrip, Stewart.

Sitting in that box suite high above the track, I sipped on my beer, munched on some fried chicken and found myself yelling along with the others near me, each of us cheering on our respective competitor, mine being Concord, North Carolina, driver #17 Kyle Weatherman.

Toward the end of the ALSCO 300, one of the speedway attendants tapped me on the shoulder. He asked if I’d be interested in watching some of the race from “The Rooftop,” the patio bar in the middle of the track field. Sold.

Handing me the infield passes, I took the elevator down to the mezzanine, then wandered into the tunnel that runs underneath the track. A moment later, I popped up in the Southern Appalachian sunshine, the piercing sounds of the engines speeding by me. Putting in my earplugs, I stood atop the patio in sheer awe of these technological marvels zooming by me in an instant.

I immediately thought of my Uncle Bobby and what he would think of me being there, front-and-center in the field at Bristol, that trademark smile of his from ear-to-ear. He’ll get a kick out of it the next time I find myself back home in Upstate New York, ideally on a Sunday afternoon — race day.

2 The Catawba Brewing “Beer Dinner” will be held at 6:30 p.m. Monday, April 15, at Mad Anthony’s Taproom & Restaurant in Waynesville.

3 The Japanese sumi-e painting workshop with Allan Grant will be held at 10:30 a.m. Saturday, April 13, in the Atrium of the Jackson County Public Library in Sylva.