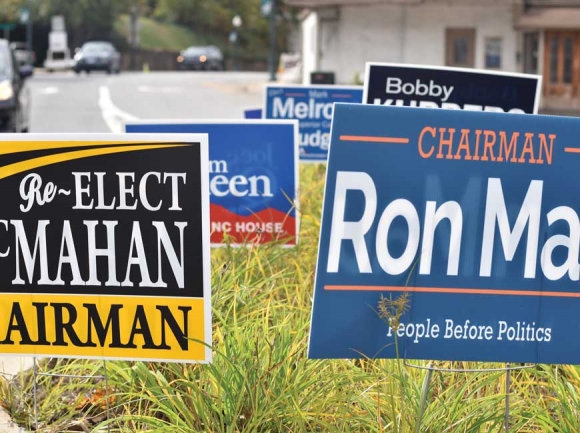 Robust voter turnout and early voting enthusiasm made the difference in three Jackson County Board of Commissioners races, causing the board to flip from a Republican to a Democratic majority.

Early voting came in just shy of double the number of early ballots cast in the 2014 midterms, with more than 9,200 people voting early this year — that’s roughly two-thirds of the total number of ballots cast in Jackson County. Each of the winning candidates — Brian McMahan, Boyce Deitz and Gayle Woody, all Democrats — received more votes in early voting than were cast in total for any commissioner race on Election Day.

Woody was the only one of the three Democrats to pick up a district that had been won by a Republican or Independent in 2014, flipping two voting precincts won by Republican Charles Elders in 2014 to a Democratic majority. Woody took 50.7 percent of the vote in Greens Creek and 51.1 percent in the River district. In 2014, Elders had won each of those districts, though just by a single vote.

In the 2014 contest against Elders, who won the race, Democrat Joe Ward had received 59.1 percent of the vote in Cullowhee, 40.1 percent in Qualla, 54.4 percent in Sylva North Dillsboro and 54.5 percent in Sylva South — all four precincts received more than 1,000 ballots. In Webster and Cashiers, the two precincts that passed the 1,000-ballot mark in 2018 but not in 2014, Ward had received 56.4 percent and 31.1 percent of the vote, respectively.

Contrast that to 2018, when Woody took down a whopping 70 percent in Cullowhee, 60.5 percent in Sylva North Dillsboro, 61.2 percent in Sylva South and 60.8 percent in Webster — all substantially better outcomes than Ward had seen. She also outperformed Ward in Cashiers, a large precinct that she lost with 37 percent of the vote, but did slightly worse than him in Qualla, with 46.9 percent.

Success in those larger voting districts was not unique to Woody. She, Deitz and McMahan ran as a team, and in a post-results interview on Election Day, Woody said she believes that approach contributed significantly to the candidates’ success.

“Brian McMahan, Boyce Deitz and I really worked together as a team,” she said. “We approached our campaign as a team and our advertising as a team, and I think that strengthened each of us.”

While Deitz strengthened his overall hold on Cody from 2014, garnering 56.5 percent of the vote compared to 54.9 percent four years ago, he lost three precincts that he had won in 2014 — Barkers Creek, Canada and Cashiers — and did not pick up any new ones.

In half of the 14 precincts, his percentage of votes was less than it had been in 2014, but in the remaining seven his share of the votes increased. In some cases the increase was slight — 52 percent in Savannah compared to 51.9 percent in 2014, for example — but in other cases it was quite substantial. In Cullowhee, the precinct that returned 1,000 more votes than runner-up Sylva South, Deitz pulled a 5.3 percent greater share of the votes than he did in 2014.

McMahan lost one more precinct than he did in 2014, when he won all precincts except for Barkers Creek, Cashiers and Glenville against Independent Jack Debnam, who was the incumbent at the time. Those same precincts voted Republican this time, and McMahan also lost the Canada precinct. The remaining 10 precincts voted Democrat.

Like Deitz, McMahan’s overall larger share of the vote occurred in spite of declines in percentage in many precincts — in nine of the 14, he drew a smaller percentage of the vote than he did in 2014 against Debnam, though he still won in seven of those nine districts. The largest decline came in Canada, which with 255 votes cast in the chairman’s race is the county’s smallest voting precinct. McMahan got 56.7 percent of the vote there in 2014 but only 46.3 percent in 2018.

However, the six districts he did better in this time around included four of the six districts to log more than 1,000 ballots. In the largest voting precinct, Cullowhee, McMahan zoomed ahead 7.75 percent from his share of the vote in 2014. His share increased by 3.1 percent in the large Webster district as well.

Woody, Deitz and McMahan will begin their new four-year terms when they are sworn in on Monday, Dec. 3.