Bringing kids to the single-track: Plan in the works for children’s mountain bike trail in Jackson 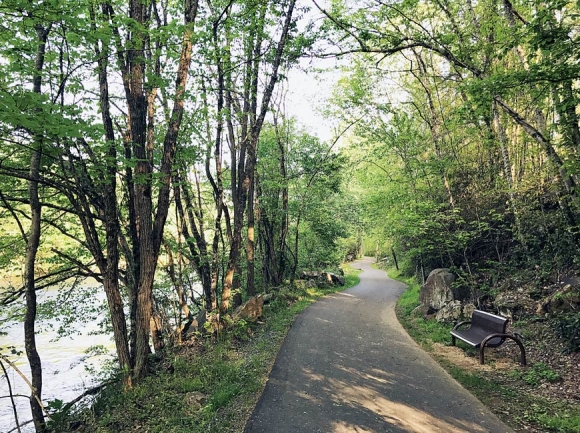 The greenway’s mile of paved trail is mostly wooded, but a grassy section midway could soon turn into a series of kids’ mountain biking loops. Nick Breedlove photo

If a partnership between Jackson County and the Nantahala Area Southern Off Road Bicycle Association comes to fruition, kids in Cullowhee could soon have access to a new mountain biking track made specifically for them.

“The county reached out to us saying that they had been hoping to build a bike park on that area in the greenway,” said J.P. Gannon, president of Nantahala SORBA and assistant professor of geology at Western Carolina University. “When we heard that we jumped on it and said, ‘We can make that happen if they want to have it happen.’”

The area in question is the only sizable grassy spot along the 1-mile greenway path, about halfway between the Locust Creek and Monteith Gap Road parking lots. The concept is that SORBA’s volunteers would install and maintain a kids’ biking area featuring a variety of short loops designed to help kids develop the various skills they’ll need to someday tackle the mountains’ more serious trails. 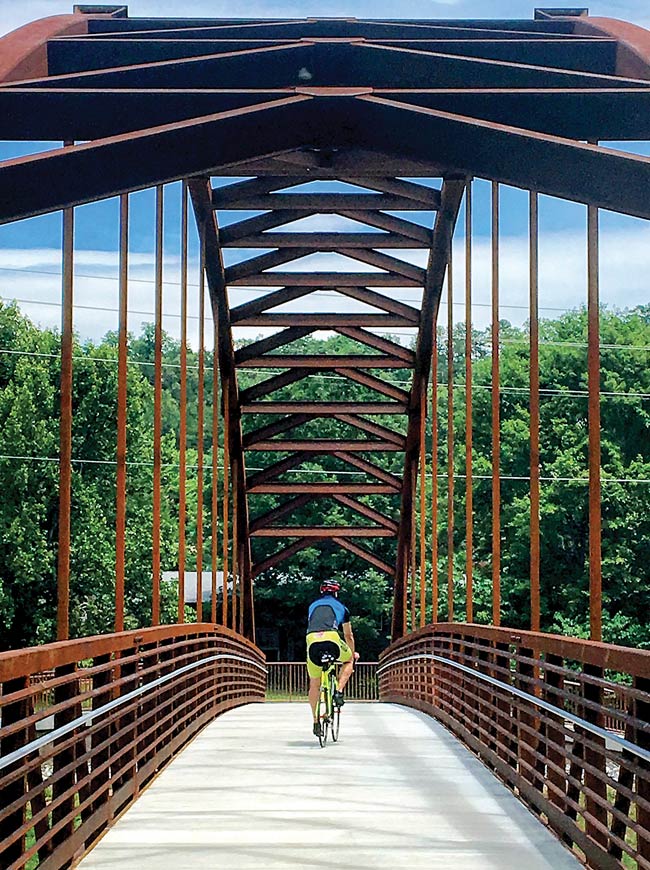 The features should be challenging for young riders but also low to the ground, making everything “super safe and low consequence,” said Gannon.

It’s an idea that the county and Nantahala SORBA are both excited about, but it’s not a done deal. The two organizations are currently working out a memorandum of understanding to clarify the terms of the relationship, and SORBA is putting any detailed planning and fundraising on hold until the agreement is final. Once it is, Gannon expects it will take several months for volunteers to build the track.

However, it appears the concept has initial support from county leadership, with county commissioners expressing general interest in moving forward when the idea was presented during an Oct. 9 work session.

“I knew (Recreation Director Rusty Ellis) had something like that in the master plan, and then I heard ‘free,’” said Commissioner Ron Mau.

Under the concept currently being discussed, Nantahala SORBA would design, build and maintain the bike track ­­— the county’s main role would be to mow the grass surrounding it.

“There will be no trees cut. There’s just basically going to be a natural trail with a lot of those bike paths as well as maybe some rocks, some logs, to where they go over it to learn how to balance themselves on their mountain bike,” Ellis said at the meeting. “It’s simple, but the maintenance is free. SORBA has agreed to come in and do all the work for free.”

“We can do a lot with a little, and we have enough money and we can design it in a way that we don’t need to use much, but the more money we have, the more donations and materials, the more interesting we can make it,” said Gannon. ”

From SORBA’s perspective, adding another trail to its maintenance log is a small price to pay for the outcome of creating a space for kids and other beginning bikers to test their skills.

“There’s not that many trails for mountain biking in the county anyway, and especially among those trails they’re pretty tough,” said Gannon. “So even for beginner adult mountain bikers they can be pretty challenging, because they’re steep so there’s a lot of riding uphill. If you don’t ride a lot that can be really challenging. Because of that, there’s basically nothing for kids.”

The greenway seemed an ideal place to install a kid-friendly track, because it’s already a destination for families looking to get outside.

The first time greenway use data was taken in November 2015, it was seeing 1,034 visits per month, with monthly use skyrocketing to 5,485 by July 2016. By July of this year, motion sensors at the trailhead had recorded more than 90,000 passes for the month. That number is likely higher than the actual number of visits, as some individuals likely pass by the counter multiple times in a single visit, but it does indicate that the greenway enjoys a significant level of popularity. The same system recorded more than 200,000 passes between Jan. 1 and July 31 of this year.

“We had been looking for opportunities to build something that could be more kid-friendly and beginner-friendly, but when we heard the county was interested in doing something on that property at the greenway, it seemed really obvious that would be a good spot because if there are that many kids there already, it seems like an ideal location,” said Gannon.

“We’re well equipped to maintain the bike park once it’s there,” said Gannon.

The idea is to make the bike track relatively small, about a quarter of a mile with all loops combined. That’s about as much as will fit in the grassy space under discussion, but in the future Gannon and his fellow SORBA members would like to see even more opportunities available for mountain bikers in Jackson County – especially beginners.

“We would argue that there’s a big need for a lot more trails just in general given the amount of land and the number of riders that are here, and also just to bring in tourism,” said Gannon. “But aside from that, there’ s a big need for beginner trails.”

The nearest trails that are truly beginner-friendly are the Jackrabbit Mountain Trails in Clay County, and they’re not that near. Having something closer in a true on-trail setting would be fantastic, said Gannon.

He’s not the only one, if the numbers are any indication. Last year, Gannon teamed up with Western Carolina University wildlife professor Aimee Rockhill and Jeremiah Haas, associate director of outdoor programs at WCU’s Base Camp Cullowhee, to count traffic on the university’s trail system, which first opened in 2013. A study conducted during the month of October resulted in a count of 2,639 passes on the trail system, 1,100 from bikers and 1,529 from hikers and runners. Like the count at the greenway, the number doesn’t represent the number of visitors, just the number of times somebody passed by one of the counters, meaning that some people could have been counted more than once per visit. Also like the greenway count, however, the number is an indication of the trails’ popularity.

Along the same lines, the new Fire Mountain Trails in Cherokee have become a magnet for locals and visitors alike, with the parking lot by Oconaluftee Indian Village consistently full of bike rack-bearing cars.

“I think this is something that we actually need in Jackson County,” Ellis said of the bike track concept.

If and when an agreement is finalized between Jackson County and the Nantahala Area Southern Off Road Bicycle Association, SORBA will start fundraising to make a kids’ bike track a reality on the Jackson County Greenway. The more funds are raised, the more features the organization can install.

Volunteer or donate to Nantahala SORBA at www.nasorba.com, or consider attending the organization’s annual fundraising party, 6 p.m. Monday, Dec. 3, at Innovation Station in Dillsboro. Attendees will enjoy craft beer while waiting to see if their ticket is a winner in a multi-stage raffle drawing designed to make many the victor.