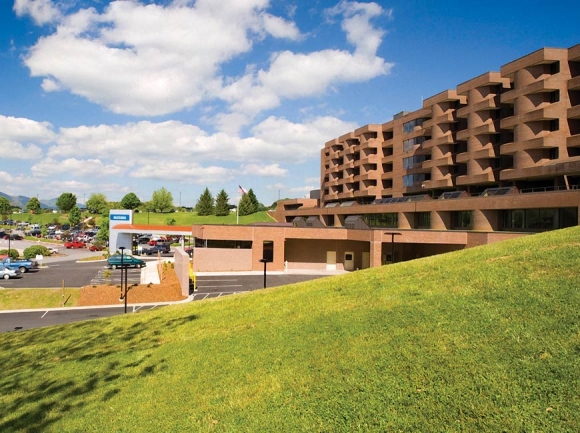 Haywood Regional Medical Center is one of three Western North Carolina hospitals that could be out-of-network with UnitedHealthCare by January, depending on how negotiations go. File photo

When retired teacher Villa Brewer went to get her mail Oct. 23, she returned with two interesting letters. One was from the N.C. State Health Plan, reminding her that Oct. 31 is the deadline to change her health insurance plan during open enrollment. The second was from Harris Regional Hospital, stating that the hospital’s current contract with UnitedHealthCare — of which Brewer is a member — will end Jan. 1 unless Harris can negotiate better reimbursement rates from the insurer.

Brewer, 78, lives in the Almond area of Swain County and worked as a teacher for 19 years, 13 of those years in North Carolina. She’s enrolled in the UnitedHealthCare plan offered by the N.C. State Plan for Teachers and State Employees — when she received the letter, she picked up the phone. Now, one week and many phone calls later, Brewer still has more questions than answers.

“I just thought, you know, where do I have to go for health care?” she said. “Do I have to go to Asheville? How do I find a doctor?”

And, more immediately, should she let the Oct. 31 open enrollment deadline pass, or should she change her health plan in recognition of the possibility that UnitedHealthCare could soon be out-of-network at Harris and Swain Community hospitals?

It’s a question that’s hard to answer, because doing so would require seeing into the future. Contract negotiations are underway between UnitedHealthCare and three Duke LifePoint hospitals in Western North Carolina — Harris, Swain and Haywood Regional Medical Center. If the parties arrive at an agreement before Jan. 1, nobody will go out-of-network. If they don’t, then UnitedHealthCare customers won’t be able to use their benefits with any physicians employed by those hospitals.

“Harris Regional Hospital, Haywood Regional Medical Center and Swain Community Hospital are working with UnitedHealthcare in good faith and hope to have a 2019 employed physician services contract in place before the end of the year,” said the hospitals in a joint statement. “If the hospitals are unable to reach an agreement with UnitedHealthcare by January 1, 2019, employed physicians will no longer be considered in-network and patients could see higher costs of care in 2019.”

According to the hospitals, United is currently reimbursing physicians at rates “significantly below market average,” something that is “simply unsustainable long-term.” Negotiations will focus on securing a rate that “allows for continued reinvestment in patient care, enhanced services and facilities, recruitment of new physicians and caregivers and planning for our community’s future.”

UnitedHealthCare spokesperson Cole Manbeck told a different story, alleging that Duke LifePoint has been stalling negotiations in a way that will prove harmful to UnitedHealthCare members.

While Manbeck said the contract issue applies to Duke LifePoint hospitals in general, the joint statement from Harris, Swain and Haywood said that each hospital has an individual contract with United and that they can’t provide information about contracts other hospitals may have with the company. The hospitals also declined to state what percentage of market value United is currently paying physicians, how long the hospitals have been in network with United or what proportion of patients use United.

When asked who will be responsible for renegotiating the contract — hospital CEOs or someone at Duke LifePoint headquarters — the hospitals responded that “our hospital leaders are working with the appropriate leaders to negotiate a new contract.”

Michelle Augusty, vice president of communications for LifePoint Health, declined to answer questions about the contract negotiation, deferring to the individual hospitals instead.

The contract renegotiation is not the only change coming to Duke LifePoint hospitals. LifePoint Health — Duke LifePoint is a joint venture between this company and the Duke University Health System — is in the midst of a merger with RHHC HealthCare Partners. The merger is expected to be complete by the end of the year, Augusty said.

In July 2017, Mission Health sent out a notice similar to the one Brewer received from Harris Regional last week, stating that it would terminate its contract with Blue Cross Blue Shield of North Carolina “if ongoing negotiations fail to reach an agreement.” The announcement launched months of back-and-forth between the two organizations, and the Oct. 5 deadline came and went without a resolution. Blue Cross Blue Shield was out-of-network at Mission until a new agreement was finally reached Dec. 15.

“It sounds as if a bunch of us are going to get left out in the cold,” said Brewer.

Customers of the UnitedHealthcare Medicare Advantage program are some of those likely to be affected by a potential lapse in contract between regional hospitals and UnitedHealthCare, and a helpline has been established to inform those customers of their options.

The toll-free line, run by MedicareCompareUSA connects callers with local licensed agents who can help them compare Medicare Advantage, Supplement and Prescription plans that are in-network at Harris Regional, Swain Community and Haywood Regional Medical Center hospitals and then facilitate enrollment in the plan selected.

The hospitals suggest that UnitedHealthcare commercial patients who have employer-sponsored coverage talk to their employers about going on a different insurance plan for 2019. The 2019 Open Enrollment period for the federal Health Insurance Marketplace is Nov. 1 through Dec. 15.