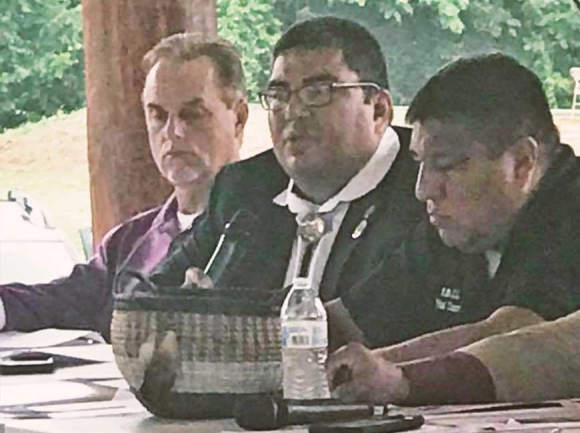 The three Cherokee tribes joined voices last week to decry the recent surge of family separations at the U.S.-Mexico border.

In a resolution passed unanimously June 20 during the tribes’ annual Tri-Council meeting — this year held in Tahlequah, Oklahoma — the Cherokee people “denounce the policy of the United States of America of separating illegal immigrant children from their parents.”

The resolution asks the U.S. government to “conduct themselves in a civilized manner congruent with that of the Cherokee people in regard to the treatment of the most vulnerable within our society, our children,” and calls upon President Donald Trump to “immediately cease and desist with any further separating of illegal immigrant parents and children,” instead implementing “a policy that allows families to stay together until it is determined if they will be granted asylum or sent back to their native homeland.”

“This is an apolitical issue for me,” said Eastern Band of Cherokee Indians Principal Chief Richard Sneed, who introduced the resolution together with the EBCI Tribal Council. “It doesn’t matter whether you’re Republican, Democrat, black, white, Hispanic, Native American. This is a human rights issue. When you separate children from their parents you are traumatizing them.”

Sneed believes that Native American tribes have a unique perspective to offer on the issue, as their past includes a particularly dark chapter involving a U.S. government policy that intentionally separated Native American children from their parents in an attempt to “civilize” them — or, as the tagline of the day went, to “kill the Indian and save the man.”

The Bureau of Indian Affairs established the first boarding school in 1860, and by the 1880s the government operated 60 schools with 6,200 students, according to the American Indian Relief Council, though that figure includes on-reservation day schools and boarding schools. However, many students — including those who attended the infamous Carlisle Indian School in Pennsylvania — were forcibly transported hundreds of miles from their families to schools where they were forbidden from speaking their native language and forced to wear Western clothing and respond to Western names. Native American parents didn’t gain the legal right to deny their children’s placement in off-reservation schools until the passage of the 1978 Indian Child Welfare Act.

“While the intent of what was done to Native Americans was different (than the border policy), at the end of the day the impact on the child is the same,” said Sneed. “If you can imagine being 5 or 6 or 8 or 10 years old in a foreign land, being separated from the only person you know for security and not know where you’re going or speaking the language — if you can just imagine the fear and the anxiety and the trauma and everything that goes along with that, that’s really where the two paths crossed. Yes, the intent is different as far as the calculated outcome, but I would say the impact on the child is the same.”

Representatives from the EBCI, Cherokee Nation and United Keetoowah Band of Cherokee Indians voted to pass the resolution around 9 a.m. June 20, but at that point Trump likely already had an executive order in the works, which he signed around 3 p.m. that day. The order directs that parents and children in migrant families be detained together as their legal process plays out and directs Defense Secretary Jim Mattis to find or build housing for these families.

“I think it’s a good first step, but clearly some meaningful policy is going to have to be enacted,” said Sneed.

Rep. Mark Meadows, R-Asheville, said that he supports the tribes’ resolution and concurs with Sneed’s assessment that correcting the situation will require more than just an executive order.

“Obviously the executive order that the president signed into effect last week is trying to address it, but it really is incumbent upon Congress to act,” said Meadows. “I think what you’ll see is this week we will actually pass a bill that will address many of the concerns that were outlined in the resolution.”

Meadows took issue with the assessment that the family separations stem solely from a policy of the Trump administration, pointing to the 1997 Flores Settlement and a subsequent ruling from the Ninth Circuit Court of Appeals in 2014 that required children to be held separately from adults. That ruling, together with the administration’s zero-tolerance policy mandating that all illegal immigration cases be prosecuted in criminal court, resulted in the family separations. According to reports from national media, about 2,000 children have been separated from their parents since April.

“I think the intent of the ruling was good. The side effects are obviously what we’re seeing now,” said Meadows.

The family separation issue has dominated headlines for the past week, drawing strong opinion from all sides, but Meadows said he appreciates what the Cherokee tribes have added to the discussion.

“They do have a unique perspective to be able to look at this in a light that many other people and constituents that I have can’t,” he said. “If we can’t learn from the mistakes of the past and gain wisdom from those who have experienced some of the failed policy of the past, then shame on us.”