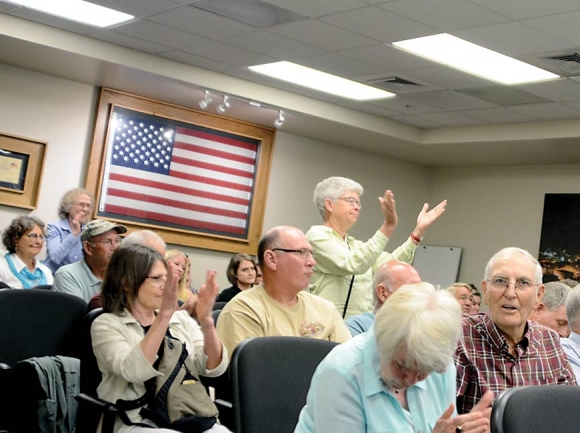 A 441.5-acre piece of land high in the Plott Balsams is well on its way to being permanently conserved following a unanimous vote from the Jackson County Commissioners to contribute $250,000 to its conservation.

“People come to Jackson County and locate and spend money here not because they find roads and houses and buildings,” said Jay Coward, chairman of the Pinnacle Park Foundation, during a public comment period that preceded commissioners’ May 31 vote. “They come here because of wild places. A wild place is important to not only our county, but it’s important to the world. That forest is the lungs of the earth, and whenever we get a chance to conserve a piece of property we should do it.”

While commissioners ultimately gave unanimous support to the project, a vote to move forward was anything but certain going into the special-called meeting May 31. Commissioners had last discussed the conservation project during a May 15 work session — in that meeting three of the five commissioners said they were hesitant to support it and asked that it not be placed on the agenda for the upcoming May 21 meeting. Letters of commitment to fund the project were due June 1 in order to factor into grant awards.

During the May 15 meeting, Republican Commissioners Ron Mau, Mickey Luker and Charles Elders had given various reasons for hedging on the funding. Elders, who represents the northeastern part of the county, said that he wanted to see the county follow through on its promise to put a park in the Qualla/Whittier area before spending money on Blackrock. Luker said expanding the greenway should be a higher priority and that contributing money to purchase land and then “just turn(ing) it over (to the town) and hav(ing) no control or say in it” bothered him. Mau said he was skeptical that the land was actually worth the $2.2 million asking price and wanted to delay the vote until county staff could come up with more specific numbers as to how committing the $250,000 would affect the county’s ability to pursue other recreation projects.

While the issue was absent from the agenda for the May 21 regular meeting, two people offered public comment in support of the project. And when the county announced a special-called meeting for 11 a.m. Thursday, May 31 — the last possible day to vote and still meet the June 1 deadline — a roomful of people showed up, with 18 speaking on the issue.

Of the 18 speakers, all were unequivocally in favor.

“I was fortunate enough to marry a local, and we’ve raised our family here,” said Barbara Hamilton, a Sylva town commissioner. “We’ve been extremely proud to be residents of Jackson County. But I see our land slipping away and gated communities going up everywhere. And I see this as an opportunity we cannot resist.” 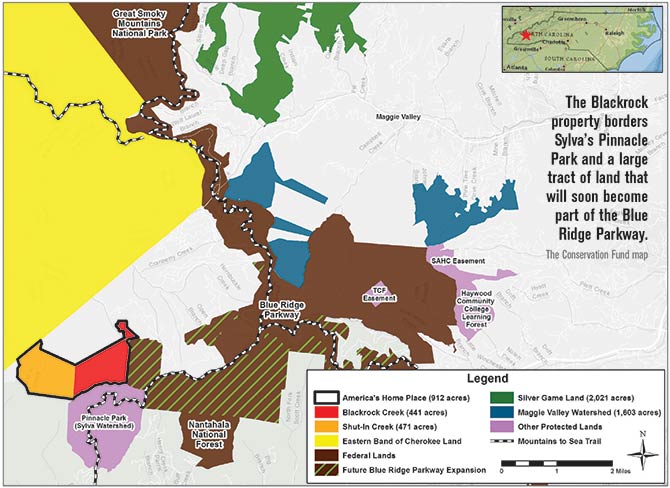 The property in question is roughly half of a 912-acre area owned by the homebuilding company America’s Home Place. Originally slated for development, it’s now being offered for conservation. America’s Home Place is selling the 441.5 acres now under discussion for $2.2 million, with Mainspring Conservation Trust taking the lead to secure funding for the remaining 471 acres by 2020.

“I’d like to see it left to all the taxpayers and all the people to do their thing. Walk, hunt — you won’t be doing much fishing I can tell you that — but if we let this go I’m afraid this will be the end of it,” said Henry Bryson, a Jackson County native and self-proclaimed “country boy.” “We won’t get another chance. I’m really surprised we’re getting this chance.”

“It’s a deal, really,” agreed Sylva resident Drew Hooper. “If it goes to developers they’ll build houses and it will look like Waynesville. I don’t want that. It will ruin them creeks. It will ruin North Fork.”

Other speakers addressed commissioners’ concern that taking the property off of county tax rolls would hurt county finances.

“In 1989 a much larger and probably more developable piece of land was taken out of the tax base when Panthertown Valley passed from private hands into the Nantahala National Forest,” said Burt Kornegay, a retired outfitter and guide. “Panthertown Valley contributes to the finances of this county. It is not a zero.”

The same can already be said of Pinnacle Park, which has been around since 1992, other speakers said.

“You wouldn’t believe how many people from out of Jackson County I have met on that trail,” said hiker Sue Nations. “South Carolina, Texas, Georgia — I even met a person from Alaska on that trail, and that’s what drew them to Jackson County. That trail is very widely known and respected across not only Jackson County and the state but across the country. The Pinnacle Park is definitely an economic asset to the county, and adding the Plott Balsams to the park will increase the benefit to the county.”

As public comment concluded, County Manager Don Adams spoke to the concerns some commissioners had voiced during the May 15 work session. The county’s Conservation, Parks and Recreation Fund — from which money for the project would be drawn — was projected to have $1.003 million available at the beginning of the 2018-2019 fiscal year in July, he said. That would be the balance after withdrawals for recreation capital improvements and $250,000 to finish Savannah Park.

“At this point, the million dollars is the known, and the two unknowns are the final cost for Savannah Park and the cost for Whittier Park,” Adams said.

Adams’ proposed support letter included a series of contingencies designed to address concerns from commissioners. According to the letter, which commissioners later adopted by unanimous vote, the $250,000 would be transferred only if the Clean Water Management Trust Fund grant was successful, two independent appraisals of the property were performed to show that the purchase price was a fair market value, the conservation easement placed on the property allowed for the most flexible parameters possible for passive recreational use, and the town and county mutually agreed on any uses allowed in the future.

In any case, Adams said, no money would be transferred until closing, projected to take place at the end of the calendar year.

Following Adams’ presentation, commissioners began a discussion that ended with the Republican commissioners reversing the position they’d taken May 15.

“Thank you for all the comments from everybody,” Mau said. “They’re much appreciated. Everything stuck out. I go to Pinnacle Park, love it out there.”

Mau went on to say that he’d put some effort into researching land trusts, conservation easements and their possible pitfalls, calling up the author of a Brookings Institution article on the topic to discuss red flags to look for in this situation.

“He gave me some. Some of the things he talked about were making sure these deals were transparent if using public dollars … What happens on these deals is we’re getting asked to put public funds into this deal and somebody’s going to get a big tax break on it. That’s a policy thing we need to think about as a county, Mau said.”

Mau then asked his fellow commissioners whether they agreed that Jackson County should have a policy on conservation projects.

“My question was do we need to develop a policy for future projects like this?” asked Mau.

“I think it’s a case-by-case,” said McMahan. “That’s something we can talk about in the future. Obviously it doesn’t have any impact on today.”

Commissioner Boyce Deitz said he didn’t have any problem with developing a policy, but that he did have a problem with the fact that it seemed to take a whole roomful of people to convince the majority of the board “how important these mountains are.” It used to be, he said, that the poor people scraped out a living in the high elevations while the rich folks lived down below.

“It’s kind of changed here now in the mountains,” he said. “We have people coming in here, and they build on high so they look down on us on low. And we have to look up at them. And the reason I run for county commissioner was for that one reason. That was the only reason. Because I love these mountains, and I love what we got here.”

The conversation began to turn in favor of the project when Luker stated that he would provide the third vote necessary to commit the funding. However, Luker was also critical of the process used to move the project forward, saying that it wasn’t as transparent as it should have been and that his original hesitation had been because it sounded as though the land wouldn’t be open to uses like hiking, hunting and biking.

The possibility of future recreational opportunities has been part of the conversation surrounding the property since it was first discussed publicly in 2016, with Bill Holman, North Carolina Director for The Conservation Fund, expressing a longstanding dream of creating a trail along the spine of the Plott Balsams to connect Sylva, Waynesville and Maggie Valley.

“Here we are on the 13th hour of something that could have been worked out a lot earlier, some more clear, concise transparency,” Luker said. “There’s no doubt that I’m going to vote to approve it.”

Deitz was quick to respond to the accusation.

“I don’t think there’s any problem with transparency … We weren’t hiding anything,” he said. “We were ignorant of the facts, and it’s our own fault if we’re ignorant and don’t get out and find out better.”

McMahan added that it wasn’t correct to characterize the project as a “13th-hour” deal.

“This project has spanned several years,” he said. “This is not just all of a sudden come up at the last minute.”

The Smoky Mountain News first reported on the possibility of conserving the property in 2016, when The Conservation Fund began discussing the possibility of Sylva purchasing it. According to McMahan, the Eastern Band of Cherokee Indians had been considering purchasing it before that. When the current proposal first came around, he said, commissioners couldn’t discuss it as a group because it was the town’s project, so it wouldn’t have been appropriate for the county to break the news in open session and the topic was not eligible for closed session. So McMahan asked Adams to discuss it individually with each commissioner so that everybody could have the chance to research and consider the proposal. Sylva first discussed the proposal publicly April 26, and the county followed suit during a May 15 work session.

“We have been fully transparent. Everybody has known about this for months and had the opportunity to ask questions and research,” McMahan said. “There has not been hidden information. Transparency means you’re hiding stuff from people, and that’s not what happened here.”

With the commitment letter issued, all that’s left is to wait and see whether the property appraises and the Clean Water Management Trust Fund grant is awarded come September. If so, The Conservation Fund will move toward closing on the property by the end of the calendar year.

“The Conservation Fund greatly appreciates the commitment of the Mayor and Commissioners of the Town of Sylva and the Chairman and Commissioners of Jackson County to provide local funds to help expand Pinnacle Park and to protect Blackrock,” Holman said. “Local funds will leverage private and Clean Water Management Trust Fund dollars to acquire the Blackrock property, protect the crest of the Plott Balsam Mountain range and provide public access.”

A video the May 31 public comment session and vote on the Blackrock conservation project is online at www.youtube.com/watch?v=95Ben4LKVtc. It was filmed by Olivia Hicks of The Canary Coalition and aired on Mountain Stream TV.