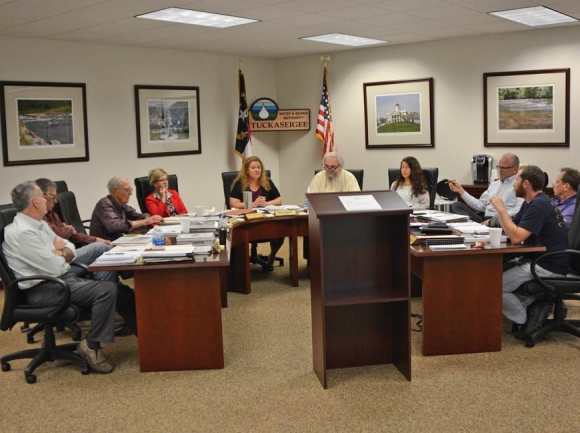 TWSA board members discuss what to do about upfront fees during a May 15 meeting. Holly Kays photo

The Tuckaseigee Water and Sewer Authority will look to keep up-front fees for water and sewer hookups high when it adopts its new budget in June, following a divided May 15 vote.

The fees, which are currently called impact fees and will be termed system development fees when the new fiscal year begins, are levied to pay for the future cost of replacing the water and sewer capacity that the new user will occupy. They’ve been a topic of contention in recent years, with opponents saying that the fees, which can be in the tens of thousands of dollars for a water-intensive business like a restaurant or brewery, are a hindrance to economic development in Jackson County. Meanwhile, proponents say that eliminating the fees would require raising rates for existing users, many of whom have already paid an impact fee in the past — that wouldn’t be fair and shouldn’t be considered, they say.

In 2017, the state legislature passed a law regulating how system development fees can be calculated, prescribing the method utilities must use to calculate the maximum possible system development fee. TWSA is now at the tail end of implementing those regulations, having just voted to accept the results of an analysis it commissioned to come up with the maximum rates.

The analysis, presented during a May 8 work session, showed that, while system development fees for residential customers were mostly below the calculated ceiling, commercial fees were well above that ceiling. The initial version of the analysis showed that TWSA was already charging less than the maximum fees, but that was due to a mistake in the calculations. The consultant had originally done his calculations based on the number of TWSA accounts, not the number of units TWSA serves — some homes and businesses share a meter, accounting for that fact caused a significant shift in the results.

Recent public discussion about upfront fees has centered on the plight of Creekside Oyster House and Grill, which originally thought it might be unable to follow through with its plan to relocate and expand due to $44,900 in water and sewer impact fees. The analysis showed that going forward the fee ceiling for an identical business would be $34,300 for water and sewer combined — a 23.6 percent reduction.

Two members of the TWSA board — Sylva Commissioner David Nestler and Jackson County Commissioner Ron Mau — pushed for TWSA to take this opportunity to further downgrade upfront fees, even eliminating them completely and replacing them with a monthly fee charged to all users.

“As a budget planning tool, this is a picture of what you don’t want to have to base your financial planning on,” Nestler said, looking at a table of impact fee revenues from the last 13 years. “This looks like it’s bonus money that goes into reserve.”

“System development fees provide advance reserves for the kinds of things we’ve been doing over the last few years,” said TWSA Executive Director Dan Harbaugh. “When you have a market that’s hot and available capacity and people want to buy and you do upfront charges and people are giving you money to offset needs for the future, it gives you reserves that can be put in the bank to slow down the rate of increases.”

Harbaugh said that now is not the time to scale back revenue, because TWSA has a long list of capital improvements that will need to happen over the next 20 years, with the capital improvement plan showing TWSA quadrupling its debt service between now and 2037.

“We’re looking at a long-duration drawdown of our capital reserves based on what’s in the capital improvement plan,” he said.

Harbaugh was direct in his opinion on the fee issue. He’s a proponent, and believes getting rid of the fees would be unfair to ratepayers.

“TWSA staff doesn’t recommend the elimination of first-time fees for new customers due to impact on ratepayers,” he said May 15.

Ending the three-hour meeting required the board to give its finance committee guidance on how to structure fees for the 2018-2019 budget, and Nestler made the first move, asking the board to “look into eliminating system development fees entirely and look at how much revenue we would need to make up and how we could by charging all customers based on how much that customer uses.”

Mau seconded Nestler’s motion, but no other board members joined them by voting in favor.

The question of exactly how much TWSA would need to bring in annually to replace revenue from system development fees doesn’t seem to have an ironclad answer. The recently completed analysis puts the figure at $250,000, a number that comes from the average impact fee revenue over the past six years. However, Harbaugh said, going to a 13-year mean yields an average of $663,000.

But deciding which figure is most appropriate is a tough call, he said. Fee revenues have been more stable over the past six years than over the past 13, and the 13-year mean covers a time when TWSA’s policies surrounding impact fee rates were different than they are now. Then there’s the real estate boom, the bust and the recession — unusual economic events that are stuck in the middle of both timeframes.

When Nestler’s motion failed, board member Buddy Parton, who was appointed by the Town of Dillsboro, moved that the board look to retain system development fees “at the appropriate level” and continue charging existing users system improvement charges to cover maintenance costs, which state law says system development fees can’t pay for.

“TWSA was formed in 1992, and the number one and two objectives were focus on financial viability and the other was controlling impact on TWSA ratepayers,” Parton said. “I’m concerned about if we do away with it (system development fees) that we’re not going to have those funds in reserve.”

Parton’s motion ultimately carried. The Finance Committee will meet at 12:30 p.m. Tuesday, May 29, to discuss rates for the 2018-19 budget, and the full board will consider those proposals when the draft budget is presented in June.