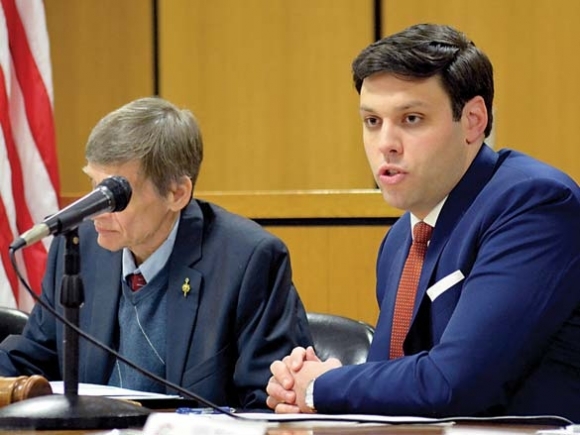 A series of water line breakages in Canton during a recent period of extreme cold provoked unusually lengthy complaints from residents determined to point out the obvious, while also pointing fingers.

“It’s been a nightmare outage,” said Mike Hyde of the four days he was without water. “Thanksgiving of 2016 went past an inconvenience, [but] this was a hardship. It was worse on people with health problems.”

Hyde joined several others at a town board meeting Jan. 11, where a full 90 minutes was spent discussing the breakages, which began Jan. 5.

“Starting Friday about 2 p.m. several water breaks started occurring around town,” said Canton Mayor Zeb Smathers. “About 4:37 — I can tell you it was 4:37 because I was doing the dishes when it happened — my water and other houses in the Spruce Street area lost water as well.”

As in many municipalities across the nation, sewer and water infrastructure needs have been a can kicked down the road for decades; such projects are expensive, difficult and not nearly as glamorous as a new animal shelter or recreation center. They don’t win elections, and are largely out of sight and out of mind, until residents are out of water.

But when a series of nights with lows more than 10 degrees below average beset the region, more than 40 homes were left quite literally high and dry; Canton Alderman Dr. Ralph Hamlett said that he, for one, wasn’t afraid to use the term “climate change.”

Earlier news reports attempting to implicate the town’s massive Champion Paper mill as a convenient culprit — the mill typically uses about a million gallons a day — helped fuel the marathon comment session. Those reports, however, are all wet.

Canton Alderwoman Gail Mull, who is retired from the mill, said that the papermaking machinery at Champion doesn’t use water from the town’s supply, instead taking it directly from the nearby Pigeon River.

Only sinks, restrooms, showers and other such accommodations at the mill, such as emergency eyewash stations, demand potable water from the town.

Regardless of why it happened, or whether it was an act of God or of humankind, town officials offered up hotel rooms and bottled water to those inconvenienced by the leaks, which were mostly fixed by Jan. 10.

“When you’re dealing with unprecedented cold with lines that were buried 40 years ago or four weeks ago, things are going to get cold and break,” said Alderman James Markey. “I share the frustrations of how long it took to get water restored, but in situations like this, I do think it highlights more important than strong infrastructure in a town, the thing that a town survives on and thrives on are the people who care deeply about it — both the people who take care of one another and the town employees who went so far above and beyond to make sure that people were taken care of and looked after.”

The leaks, however, came at a particularly opportune time, if such a time truly exists.

The Spruce Street reservoir, which serves the north side of Canton, had water levels too low to pump water during the crisis; after other leaks were fixed and the pumps were primed, residents in the area were glad to see their normally low-pressure service return.

It won’t be that way for long, though.

Last spring, the town supposed it would take about $1.7 million for water upgrades in the area; funds for the project were secured less than six weeks ago, just as any doubt over the project’s justification or cost dried up in the cold January air.