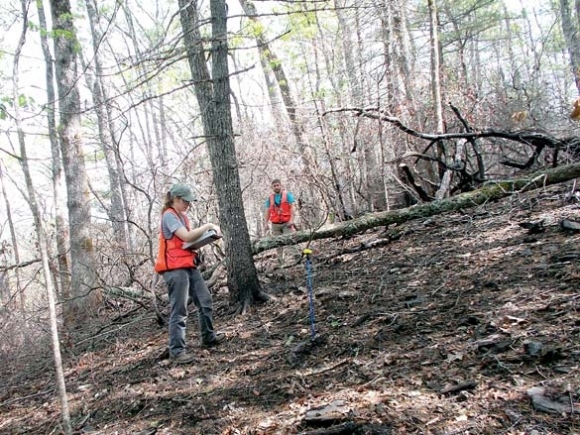 When rain finally quelled the wildfires running rampant through the Southeastern U.S. last year, the public was breathing a collective sigh of relief while the scientific community spotted an opportunity. Fall 2016 was a wildfire event unlike anything seen in recent history — in the eastern part of the country, at least — and the blazes left behind a natural laboratory to study what happens on a burned landscape once the flames fade.

Various scientists are investigating the fires’ effect on the timing of flower blooms, tree growth, carbon dioxide cycling and more, with organizations represented including but not limited to WCU, the U.S. Forest Service, the Great Smoky Mountains National Park, Mississippi State University and the Coweeta Hydrologic Laboratory.

“We want to see not only how above-ground things respond to fire, but some of the other processes, some of the driving factors that are below ground,” Workman said.

As a respiratory therapist, Bruce Moyle is trained to deliver breathing therapies to…

In a forest system, carbon dioxide is taken out of the atmosphere during photosynthesis, when plants use it to create energy for themselves and release oxygen as a byproduct. But as leaf litter falls to the ground, organisms in the soil break it down to release a variety of nutrients and gasses — including CO2.

“What we don’t want are forests giving off a lot more CO2 than they take up, because that could contribute to CO2 in the atmosphere,” Collins said.

After being burned, a forest might have less capacity to photosynthesize than it did before burning, as wildfire often clears out understory plants and could kill trees as well. But what happens to the soil’s rate of carbon dioxide release, which is the other end of the forest system’s CO2 cycle?

To start answering that question, Workman and Collins set up plots on the sites of the Wine Spring and Cliffside fires, both in Macon County, taking data on what’s coming out of the soil from burned and unburned plots in those areas from May through October. The study will likely continue through several more seasons.

“They’re responding in part to the amount of organic matter or litter, and so the fire removed the litter from the sites,” Collins said. “We think that decrease in the litter may have decreased the organic matter that’s available for the microbes to decompose.”

So far the difference between the emissions level at the two sites seems to be small, however, Collins said she wouldn’t categorize this initial analysis as either good news or bad news. There are too many variables, and too much that remains to be evaluated. The difference could disappear quickly as time goes on and more leaf litter falls to replace the burned-up duff, and the trends from this data set wouldn’t necessarily hold at other burned sites. For example, the picture could shift considerably if the data were taken from sites that burned more severely than Cliffside and Wine Spring.

Peter Bates, an associate professor in WCU’s Department of Geosciences and Natural Resources, hopes that his research will provide a bigger-picture, more broadly applicable view that researchers like Collins and Workman can use to better understand their data.

“There really aren’t any good indices (of fire severity) that we’ve found in the east,” Bates said. “A lot of this work has been done out west, so in a western system that is different from ours. Since our forests are so diverse and so different than what they have out west, those indices don’t really work very well in the east.”

Bates and Diane Styers, also an associate professor in the Department of Geosciences and Natural Resources, are working to build just such an index tailored to the forests of the Southeastern U.S.

“In terms of fire severity, we’re really looking at the fires’ effect on vegetation to see how much vegetation was consumed, how much the forest floor and the leaf litter were consumed, things along those lines,” Bates said. “We know that fire severity will have an influence on what the long-term ecological response will be.”

Funding from the U.S. Forest Service and WCU allowed Bates and Styers to get out in the woods and measure fire severity at various points along field transects they set up. Now they’re working to correlate that data — observed with boots planted firmly on the ground — with satellite imagery taken from tens of thousands of feet above it.

Preliminary results on that project are still several weeks away, and the project itself will likely continue for several more years.

Fire is a natural feature on any landscape, but many scientists are saying that its frequency will increase over the coming years.

“With climate change occurring and more variable weather and extremes in temperatures and rainfall, if we get hotter temperatures or drier weather, we anticipate that with warmer and drier conditions we will have increased fire incidents,” Workman said.

Hot and dry conditions make fuels more flammable, increasing the danger that a stray spark could set a whole forest ablaze. But heat and drought are also stressful to trees and other plants, making them more susceptible to death, dieback and infestation by pests. That, then, increases the amount of fuel scattered on the forest floor, which then increases fire danger — a cycle that can keep going in ever-escalating spirals.

That makes understanding how fire works on Southern Appalachian landscapes — what factors contribute to it and how it impacts soil, water, wildlife and vegetation in the years following a blaze — a task of vital importance.