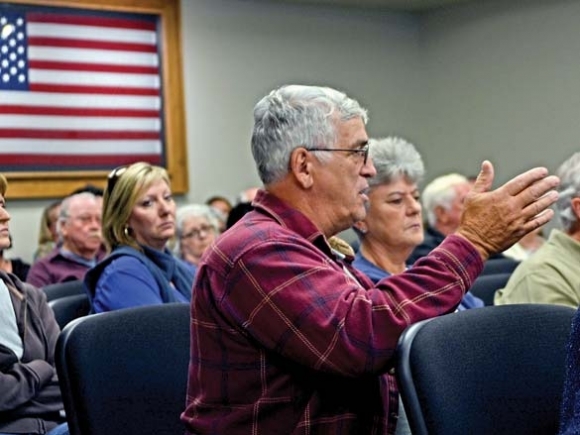 A planned vote on whether to approve Sunday morning alcohol sales was delayed Oct. 16 when the Jackson County Commissioners decided they should hold a formal public hearing before deciding the issue.

“The one theme I heard from everyone was, ‘Let’s have a public hearing,’” Commissioner Ron Mau said.

The issue of Sunday morning alcohol sales, made possible by a new state law referred to as the Brunch Bill, has been making the rounds in counties and municipalities throughout Western North Carolina over recent months but was first discussed in Jackson County during a work session Tuesday, Oct. 10, with commissioners deciding to place it on the agenda for a vote at their Monday, Oct. 16, meeting.

A full house greeted them when the meeting began, a crowd of roughly 75, the majority of whom were church-going people who vehemently oppose the Brunch Bill. Commissioners decided before public comment began that the vote would wait until after a formal public hearing could be scheduled — that date has not been set — but that didn’t stop 16 of those attending from telling commissioners how they feel about expanding alcohol sales.

Comments from the public

The comments were often emotional, with stories of fathers and mothers and sons and daughters whose lives had been torn apart by alcoholism.

David Blanton, a former paramedic, recounted the many times he’d responded to a car crash only to witness somebody die because of alcohol.

“Is alcohol really worth it? I carry ghosts. That’s what I call it,” he said.

Others lamented the direction they’ve seen the county go in over recent years when it comes to alcohol, saying how difficult it is to teach their children to stay away from alcohol when it’s seemingly sold everywhere. Shouldn’t Sunday morning, they said, be the one time where that’s not a problem?

“I’m not judging anybody, but if somebody has to go out and drink at 10 o’clock on a Sunday morning, they’re probably an alcoholic,” said a tearful Chastity Buchanan. “Just think about that. What if one of your family members was driving down the road after going to church or Walmart on a Sunday morning, and they kill them?”

The communities surrounding Jackson County are tight-knit, and many of the commenters made individual appeals to commissioners they know personally.

“I feel like I’ve been let down if y’uns go ahead and vote this thing in. I really do,” said Reva Lewis, who said she worked “endless hours” campaigning for Brian McMahan, Mickey Luker and Ron Mau. “I got out and campaigned and talked about what good Christian men you are, and I absolutely feel like you’re letting this county down if you don’t stand up.”

Stephanie Edwards, executive director of the Cashiers Chamber of Commerce, was the only person to voice support for the Brunch Bill Oct. 16. It’s vital that commissioners pass it, she said, because those two hours have a very real impact on the ability of businesses in Cashiers to keep tourists coming for a full weekend stay.

“This is not an issue that is trying to be disrespectful to the church or divert church attendees from going to their church services,” she said. “It’s an economic issue, and it’s all about leveling the playing field for small businesses here in unincorporated Jackson County.”

Sylva has already passed the Brunch bBill, with businesses in town limits already offering Sunday morning brunch beverages. Neighboring Highlands passed it in August. Waynesville and Franklin have both adopted it. Regionally, Blowing Rock and Boone, two communities Cashiers competes with for customers, have adopted it. However, the Brunch Bill got voted down in Bryson City and is still in limbo in Canton and Maggie Valley. Jackson is the first WNC county to take up the issue, however.

Edwards added that many voices back her support of the Brunch Bill, with a quick two-day survey of Chamber members yielding 168 responses, with 96.4 percent in favor of passage. However, she said, it would have been difficult for any of those business owners to make it down the mountain on such short notice.

“Quite frankly, this was held on very short notice, and this is the height of leaf season,” Edwards said. “My restaurants are serving thousands of visitors and residents as we speak and they are the ones creating the revenue and jobs for the county.”

While not in attendance Oct. 16, Tourism Development Authority Director Nick Breedlove has also voiced his support for the measure, appearing at the commissioners Oct. 10 work session and writing a letter in support.

Commissioners first gave indication of how they might vote on the measure during an Oct. 10 work session, and it seems likely the Brunch Bill could fail in Jackson. Commissioners Charles Elders and Boyce Deitz both expressed disagreement with Sunday morning alcohol sales, with Commissioners Mau and Luker saying that, while they personally don’t think people should drink Sunday mornings, they would lean toward voting for less regulation and not more. McMahan did not state his position on Oct. 10 but later said on social media that he would vote against the Brunch Bill.

“It seems like we go more and more in the direction of taking away some of the things we’ve done in the South on Sundays or not done in the South on Sundays,” Deitz said Oct. 10. “Used to, you went hunting on Saturday because you wasn’t going to go hunting again until Monday. All at once we decide that’s not important anymore. You can deer hunt on Sundays, you can shoot guns, you can do whatever you want. That’s I guess a slippery slope we’re all sliding down and nobody seems to care, but I care.”

He also expressed frustration with the N.C. General Assembly for handling the issue like it did. It’s a contentious one, and by forcing local boards to make the decision, he said, they’re making those local representatives take the heat from constituents rather than shouldering that responsibility themselves.

“I don’t sell beer in my business, but I don’t say a word against anybody that does,” agreed Elders. “But I just feel like if we’re going to have to do this, why can’t we wait and have respect for the churches in this county?”

Mau, meanwhile, pointed out that some churches recognize Sunday as the Sabbath while others recognize Saturday. Could the county be seen as establishing a religion by shaping its ordinances around the religious practices of some residents but not others?

“You are correct, it probably is subject to challenge,” said County Attorney Heather Baker.

“It’s up to people to make their own choice,” Mau said. “I as an individual can decide if I want to consume a mimosa. I probably won’t on a Sunday morning — I’ll be at church.”

“I’m all in favor of less government and not more,” Luker said. “We definitely have too much now. So it would be a tough decision I think, personally, but at the same time I took an oath that I have to adhere to so I would base my decision on upholding the laws.”

No date has been set for the public hearing, but the county is required to advertise it at least 10 days in advance, and the hearing date must be set during a public meeting. The next commissioners meeting is scheduled for Monday, Oct. 30, so the earliest a public hearing could be held would be Thursday, Nov. 9.