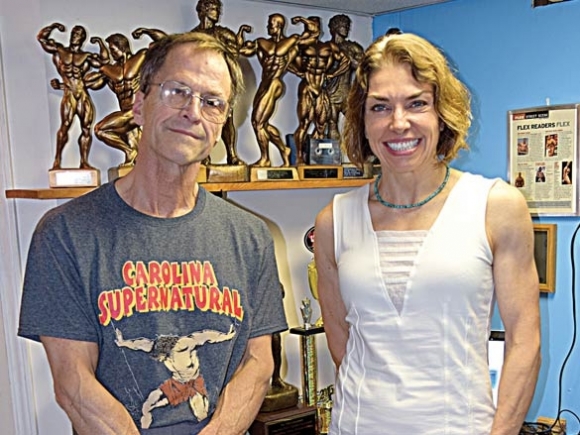 When you can’t find motivation to get up early to hit the gym or can’t find the self-control to avoid the fast food line for dinner, just look to Nancy Lux and Reid Hendricks.

At 62, Hendricks has competed in natural bodybuilding competitions for 32 years and also trains others — like Lux — to compete.

Already an accomplished cyclist, Lux decided at the age of 50 she wanted to push her fitness to a new level by training for bodybuilding competitions. It’s been something she’s thought about for 20 years and figured it was now or never. 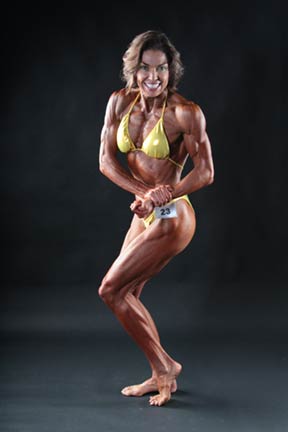 “I’ve been an athlete my whole life — a track bike racer and my husband is a cyclist too,” she said. “I’ve always known my build is genetically suited to do bodybuilding but I just didn’t know how to get started, but finally last fall I said to myself ‘you’re 50 going on 51 and life is too short, I just need to do it.’”

Deciding to become a bodybuilder is not a decision to be taken lightly. It requires dedication, perseverance and sacrifice. Even for Lux, who was in good shape and had a low body fat percentage to begin with, the journey was arduous. Initially she found a trainer in Asheville — Anthony Tiller, owner of Underdog Fitness & Performance Training — to get her on the right path.

For months, even during tax season, the busy CPA drove from Waynesville to Asheville every evening to train with Tiller. Like many people, Lux had the stereotypical image in her head of what it meant to be a bodybuilder, but she quickly learned there are several different categories of bodybuilding competitors.

“When I first started this journey I thought you had to take steroids and that’s based on what I’ve seen in magazines, but I didn’t know about natural bodybuilding,” Lux said.

Natural bodybuilding competitions require contestants to pass a urine test as well as a brief polygraph test to ensure they aren’t using any kind of performance-enhancing drugs.

“In women’s bodybuilding there’s different divisions — bikini, which is about figure more than muscle, and then there’s bodybuilding,” she said. “I thought you had to be big to compete but that’s not the case. With natural bodybuilding it’s all about how cut and how lean you are.”

In addition to a daily weightlifting workout, Lux had to begin a fairly strict macronutrient diet, which consists of 30 percent carbs, 40 percent protein and 30 percent fat. This kind of diet helps athletes lose weight consistently while also maintaining plenty of energy without food cravings. She weighed about 140 pounds when she began training and lost only about 10 pounds during training, but muscle does weigh more than fat.

“I didn’t do anything drastic — it’s more of a gradual approach — but I tracked and weighed and measured all my food and I’ve never done that before,” Lux said.

Moving into March, Lux said her training was going well when she saw that an all-natural bodybuilding competition was going to be held in Franklin in two weeks. She hadn’t planned on competing so soon, but also thought a smaller competition might be good practice. More than 60 people showed up for the competition. Lux was a little nervous until she realized she was the only woman competing in the female bodybuilding category while all the other women were showing off their bikini bods in the figure category. Meanwhile, Lux was backstage loading up on carbs, something bodybuilders do just before a show to beef up their muscles.

Even though she had no competition, Lux went out on the stage in front of the panel of judges in her sparkling green bikini and did the series of poses she had been trained to do. She got great feedback from the judges and won overall best female in her category. She also enjoyed getting to meet more bodybuilders.

“I was so struck by how incredible friendly, inviting and complimentary everyone was at the contest though,” she said. “It was one of the most incredible experiences I’ve ever had.” 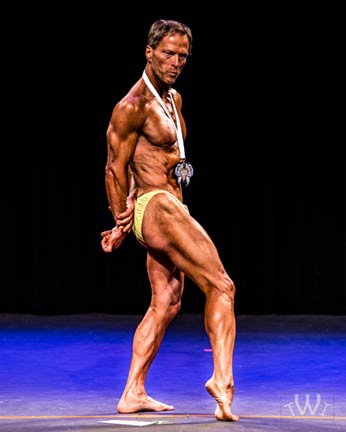 Hendricks was one of the competitors she met backstage in Franklin. After he told her about his experience with training athletes in his home gym in Waynesville, Lux decided to cut out her drive time and stress by training with Hendricks closer to home.

Hendricks’ home gym has trophies dating back to 1982 and photos of the many people of different ages and backgrounds that he’s proud to say he’s trained. He said being a good coach means “having patience and being able to motivate people.”

“I love to see people improve,” he added.

After a few more months of training together, Lux and Hendricks competed in the Carolina Supernatural Bodybuilding competition in June held in Spartanburg, South Carolina. They both returned home with their masters pro card, which means they both placed first in their overall categories and can move on to a pro competition.

“I was in the heavyweight category because I weigh over 115 pounds,” Lux chuckled. “But I beat all the lightweight girls and I was also the masters winner and the over 50 category winner.”

Hendricks, competing in the over 60 category, also beat out his younger competitors for a masters pro card.

It was then that Lux felt like all the hard work was paying off.

“Admittedly, the last couple weeks before a competition is difficult — you’re really trying to monitor your carbs, and we were doing carb back loading because in bodybuilding you want to get lean but the day of the show you spike your carbs to fill out your muscles to look full and bigger.”

The two continue to lift weights and walk every day but the extreme dieting, measuring and weighing have been discontinued until they are about 10 weeks away from the next pro show Nov. 4 in Suwanee, Georgia.

It’s more than about winning for Lux and Hendricks — they simply enjoy the challenge of pushing their bodies to be as strong as they can be and eating healthy. While bodybuilding may not be for everyone, Lux said she believes anyone could do it if they put their mind and body to it.

“Anybody can make improvements,” she said. “Can anybody get up on stage and do a bodybuilding competition? Sure, but it takes commitment, sacrifice and the key thing is the diet,” she said.

She doesn’t advocate the macronutrient diet for everyone, but she does think it’s beneficial for people to track their food intake so they have a better understanding of what foods make them feel better versus what foods are making them feel worse.

“You are what you eat — we’re so bombarded with fast food and processed food,” Lux said.

She also wishes more people knew how efficient weight lifting is versus a cardio work out. Weight lifting allows you to build strong muscles that burn calories more efficiently. Her workouts with Hendricks are strenuous but last only 45 minutes a day.

“People are afraid to work out, but the duration isn’t hard — it’s doable — and you don’t really even sweat that much — but it’s efficient and productive,” she said. “Everybody should see how lifting weights is a better way to be healthy.”

If you’re interested in training with Hendricks, who has 32 years experience and is a certified through the National Federation of Professional Trainers, call 828.456.6881.