Owner Brenda O’Keefe, wiping tears from her eyes as she sat at a table at Joey’s with a sunny view of Soco Road coming through the picture window, said it’s time to move on. She struggles to find the right words to express how much the restaurant has meant to her and her late husband, Joey. And she can’t say enough how much she appreciates her loyal staff and the community that has become family to her since moving to Maggie Valley in 1966.

“I want the community — which is going to feel like I’ve let them down — I want them to know how important they’ve been to me,” O’Keefe said. “I just want people to know I’ve been the recipient of so much joy and love here.”

Tuesday, June 13, will be the last day locals and visitors alike will be able to enjoy a warm, hearty breakfast at Joey’s. It’s a decision O’Keefe and her closest support system made after examining all the options. The bottom line is she can’t keep enough good employees to keep the place going, her longtime employees are having to work too much, and at 70 O’Keefe’s health is at stake.

Suffering from rheumatoid arthritis, O’Keefe’s doctor told her she had to stop working so hard. She can’t continue to be at the restaurant at 4 a.m. to start cooking and she can’t be there until after closing time at lunch washing dishes. As she heard those words from her doctor, she couldn’t help but to think of what her husband Joey would say to her if he were still here.

“Joey lived the best life of anyone I’ve ever known because he believed if you took care of yourself you’d be better able to take care of other people,” O’Keefe said.

For 37 years, Joey’s closed for six months while Joey and Brenda took off for Florida. Brenda finally decided to stay open year round so she would be able to provide health insurance and a 401K retirement plan for her employees. While Joey tried to talk her out of it, they compromised — he went to Florida for six months and she joined him for the month of March.

But now that she’s put most of her life into the restaurant, she knows she needs to slow down and walk away from a business venture that she and Joey turned into a local institution and a national treasure.

No matter what time of year it is, if Joey’s is open, the restaurant is at capacity with 190 people seated and another 50 at the door waiting for a table to clear.

From 7 a.m. when the doors open until noon when the doors close, Joey’s is a bustling place with servers maneuvering through narrow aisles, customers chatting over coffee, plates clinking around in the kitchen, and a smiling cashier making small talk with customers as she rings up their meals.

Joey’s employees work hard to have high-quality, consistent and delicious food, but the menu isn’t much different than any other breakfast joint. So what’s so special about Joey’s that keeps people coming back time after time, year after year?

“People can have breakfast anywhere — they come here for the experience,” O’Keefe said.

That experience includes a warm welcome, quick and friendly service and good food. Going to Joey’s is a tradition for people. The same families return every year, and O’Keefe gets to know them all. She knows their stories. She knows when they’re celebrating and she knows when they’re mourning. Even with all she has going on right now, O’Keefe is worried about where all her loyal customers will go for breakfast once Joey’s is closed.

“I notice when there’s one instead of a couple because they’ve lost a loved one. I tell them to never be afraid to come here and eat alone — those are the people I’ll grieve about.”

But the family atmosphere of Joey’s doesn’t just happen naturally. The restaurant’s solid reputation has taken years to establish, and it’s because of the high customer service standards O’Keefe sets for her staff.

“I’m a perfectionist. I am the customers’ advocate. I want your experience to be what you paid for,” she said. “I love the restaurant industry — I grew up in it. I have a passion for hospitality and I’m so fortunate because we literally have people who have eaten here from all over the country for 50 years.” 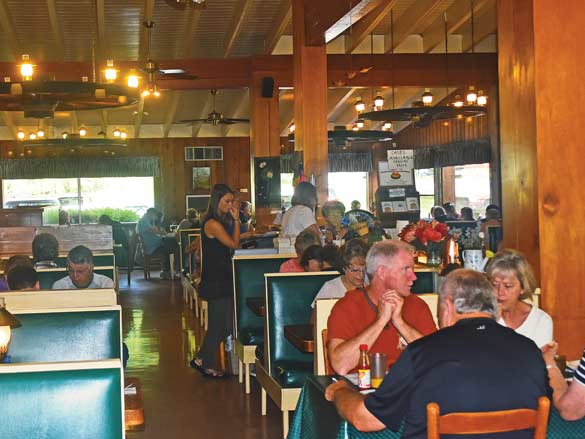 O’Keefe’s high standards could also be why it’s been difficult for Joey’s to keep enough dedicated employees on board, which is one of the reasons she is closing the restaurant.

Turnover — especially during the last three years — has been insurmountable, O’Keefe said. Maggie Valley businesses have lost many potential employees to higher-wage jobs at the casino in Cherokee. Maggie Valley Chamber of Commerce recently held a job fair with more than 40 employers on site, but O’Keefe said only a handful of people showed up looking for a job.

Many people in the valley have probably said at one point, “I’d never want to work for Brenda O’Keefe,” but she said there’s more than 2,000 former Joey’s employees who would say, “Once you’ve worked at Joey’s, you can work anywhere.”

That’s a reputation she is pleased to have.

“I am a taskmaster, I know I am. But I try to speak clearly and make my employees understand how important it is to go the extra mile for people,” she said. “The funny thing is if they do it the way I tell them to, they make a lot of money.”

Joey’s currently has about 40 employees but needs 50 or more to handle the summer season volumes. The high turnover problem has led to many of O’Keefe’s longtime employees doing the work of several people to stay on top of everything, which she said isn’t fair to them.

“These people are coming in and meeting me here at four in the morning and doing the work of six people,” she said. “It’s not about the money for me — my people who are good are being overworked.”

O’Keefe said she can’t continue to ask her employees — her extended family — to continue to work themselves to death like she’s been doing for 50 years. But it seems like many of them would be willing to if it meant keeping the restaurant open.

Rick Pendergrass worked at Joey’s when he was 16. He went on to have a successful career working in the restaurant business in Asheville, but then decided he wanted to come back to Joey’s to cook.

“Because this is my home,” he said, when asked why he came back. “I learned responsibility and the right way to do things. It worked here and I carried it through to the other places I worked. I just did a lot of growing here as a person.”

Jackie Kent was a loyal customer at Joey’s for 30 years while she worked in the banking industry. One day she called O’Keefe and told her she wanted to come work at Joey’s. While O’Keefe said she tried to explain to Jackie how stressful the restaurant business is, she couldn’t change her mind. She needed more flexible hours so she could care for her elderly father — so that’s what she did. For the last 18 years, she’s done the accounting work at Joey’s as well as anything else that might get delegated to her. 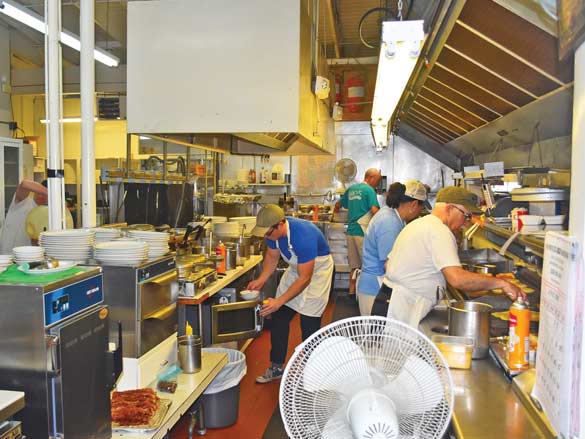 “For me it’s not just a job — it’s part of my extended family,” she said. “I wanted to part of this dream. It’s been a privilege to be here and work some before Joey passed away and now to continue on this long to be a part of it, I just feel very privileged.”

O’Keefe knows the decision to close will create a hardship for many of her longtime employees, but she has no doubt they will be successful in their future careers. In the meantime, she plans to make sure they’re taken care of with unemployment benefits or a severance package. For those who have insurance through Joey’s, O’Keefe said she’d keep the policy coverage for a couple more months during the transition.

Brenda and Joey O’Keefe never imagined they would create such an institution when they — on a whim — decided to open a restaurant in Maggie Valley in 1966.

“I had no idea but he (Joey) knew the lifestyle he wanted,” O’Keefe said.

“We just asked ourselves, ‘what do people do on vacation?’ They eat breakfast so that’s what we’ll do,” O’Keefe said.

Maggie Valley in 1966 was a stark contrast to the tourism town it is today. There were no sidewalks on what was then a two-lane road and the town didn’t even have a public water system. But with Ghost Town in the Sky getting started and hotels lined up along U.S. 19 to accommodate visitors, the O’Keefes knew the business would be coming to Joey’s.

Despite economic ups and downs, Ghost Town’s demise and other challenges, O’Keefe said business has been good.

“We’re all doing huge business but you can’t be under capitalized or think you’re going to make a million dollars — that’s not what small business is about,” she said.

So if Joey’s has such a long track record of racking in the dough, why haven’t people been knocking down the door to buy the business? O’Keefe said people do want the business, but the terms haven’t been to her liking.

O’Keefe owns the lot where the restaurant is located and the lots on either side of the building. For now, she plans to hold on to it all until the right opportunity comes along. Eventually, she’s sure she’ll lease out the building to another restaurant — but it won’t be Joey’s.

When asked what Maggie Valley will be without Joey’s, O’Keefe said, “There will be other places. There’s a time for all seasons and things can be replaced quickly.”

But she hopes Joey’s will continue to be a part of Maggie Valley’s rich history.

When she moved here, she said she was guilty of immediately complaining about what Maggie Valley didn’t have and wanted to change things for the better.

“I’m not about change now — I’m about preservation of this area,” she said. “I tell people who move here to talk quietly and respect the people who live here — you’re the guest and you have to respect who and what they are.”

Thinking about Maggie’s future, O’Keefe’s advice is to focus on what we have and not what we need.

“We don’t have to reinvent anything — we have the natural beauty around us, we have culture and music and crafts — let’s focus on that and let people come here for those reasons.”