Tax Day cometh, but not for Trump 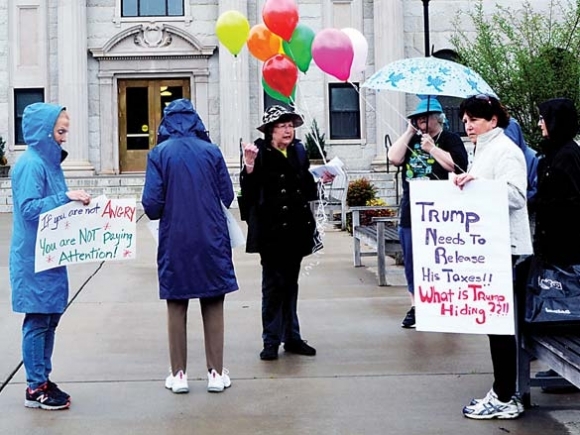 A little rain couldn’t drown out the voices of a small group of protestors who gathered at the Historic Haywood County Courthouse on Tax Day, April 18, to demand President Donald Trump release his tax returns.

Patricia Robbins, a retired school administrator living in Hazelwood who is also a Democratic Party precinct chair, said she came to the protest to demand answers.

“Every president since Nixon has released his tax returns, and I don’t know why he has resisted so significantly,” said Robbins. “As it says on my sign, if you have nothing to hide, then put it to rest.”

Robbins thinks people are “deeply concerned” with what may or may not be on those tax returns, including foreign business ties, the amount of taxes he’s paid and alleged ties to Russia.

“These are questions about charitable donations and how much money he’s making — general points of information that the American people have a right to know,” she said. “Instead he continues to resist and deflect from this question — as a mature adult who happens to be the President of the United States.”

On Easter Sunday, Trump released yet another provocative and antagonistic tweet about his taxes, probably in response to a what the New York Times called a “groundswell” of demands for their release in advance of this year’s filing deadline.

Despite the dire predictions of spring 2020, Jackson County’s budget prognosis for the…

“I did what was an almost an impossible thing to do for a Republican-easily won the Electoral College! Now Tax Returns are brought up again?” read the tweet.

Retired schoolteacher Mary Thomas helped organize the rally in conjunction with liberal group Progressive Nation WNC, which has been active in Haywood County of late and will hold a health care town hall at the courthouse at 3 p.m. on April 23.

“He’s got something to hide,” Thomas said, adding that she’d paid her taxes already this year and had no business deals in the works with Russia.