Sylva to vote on funding for Mill Street lane reduction 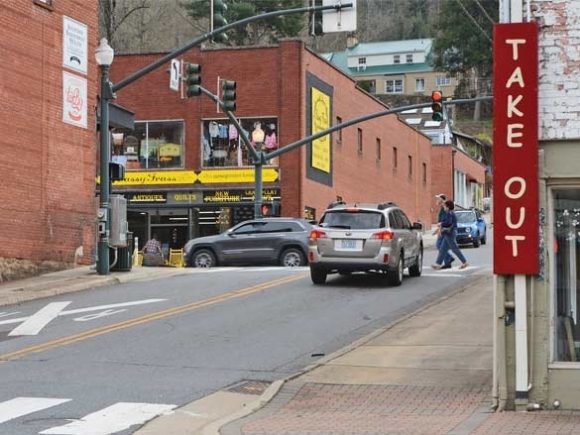 A plan to turn two-lane Mill Street in Sylva into a one-lane road will soon move forward if town commissioners vote to fund the project during their next meeting, at 5:30 p.m. Thursday, April 13.

“I think this would make our town a lot more walker-friendly, safer,” said Commissioner David Nestler when the board discussed the project during a March 30 work session. “I think we’re lucky to get this deal from DOT (N.C. Department of Transportation). We need to move on it.”

By reducing the number of lanes, the town would be able to expand parking availability downtown, a plus for Mill Street merchants who have complained that the parking situation interferes with their ability to attract customers.

The plan would provide about 40 parking spaces on Mill Street, converting what is now the left lane into angled parking stretching from Mill Street’s intersection with Main until it reaches Landis Street. The lane reduction isn’t expected to impede traffic flow, as the plans include removing the traffic light that’s currently at the intersection of Mill, Spring and Allen streets. On the block between Mill and Main, one lane of Spring Street would close — traffic could come uphill to turn onto Main Street but couldn’t go downhill to turn onto Mill — and a stop sign would control traffic coming from Allen Street to Mill Street, not a traffic light.

Of the five commissioners, three voted in favor of the plan when the town endorsed the concept in August 2016. Commissioner Mary Gelbaugh was the sole opposing vote, with Commissioner Harold Hensley, who was absent during that meeting, expressing opposition as well.

Last summer, Gelbaugh said she felt the lane reduction would unnecessarily impede traffic and wasn’t a wise use of money for the perennially cash-strapped town.

“We don’t really have parking problems on Mill Street,” she said in August. “This is a pretty expensive fix to a problem that I don’t see as a problem.”

The entire project — including sidewalks, traffic signals and a new pedestrian flasher at the Landis Street intersection — will cost about $65,000. However, the town will pay only about half of that. Sylva has already purchased pedestrian flashers for the Landis Street intersection, a cost of about $13,000. On April 13, the board will vote on whether to appropriate $20,000 from the town’s fund balance, of which $10,000 will go to address the disjointed sidewalk situation currently existing on Mill Street and $10,000 will go toward the core project. The DOT has set up a small construction fund for the project totaling $32,000 of state money.

Some details have yet to be nailed down. Exact locations of loading zones and handicapped spots will be determined after the lane reduction is complete, and Public Works Director Dan Shaeffer is considering how to arrange the new sidewalks and create features such as patio areas.

For his part, Hensley — who is against the lane reduction — believes that if one lane of Spring Street is to be closed, the town might as well go ahead and close the one-block section in its entirety.

“You could have picnic tables, you could have the whole thing if Spring Street is closed both ways,” Hensley said. “If you just close one way, you have the same thing you have now — a street.”

“I think the reason they suggested closing it coming down is because of the sight access,” replied Mayor Lynda Sossamon. “There’s limited sight.”

It also makes eliminating the traffic light easier, Nestler added, with a stop sign able to replace the existing light.

However, Shaeffer said, it wouldn’t hurt for the town to do a trial run before going through with the entire project.

“One thing I would like to recommend to the board is to try this by closing the left-hand turn off Main Street going down to Mill Street, eliminate the light on Allen Street,” he said. “Just do away with it and see how it moves.”

None of the commissioners expressed interest in doing a trial run, but the town has already had a couple chances to see what effect the lane closure might have. When a fire hit downtown in 2014, one lane was temporarily closed out of necessarity and used as parking instead. Some in the downtown community felt that the lane closure might be a good long-term arrangement. The town also got a taste of what a closure on Spring Street could mean last year, when the block between Mill and Main streets was closed during the filming of “Three Billboards Outside Ebbing, Missouri.”

While Hensley and Gelbaugh still have their reservations about the lane reduction, the majority of the board seemed to feel that the feedback from those instances was favorable and that the project would benefit downtown in the long-term.