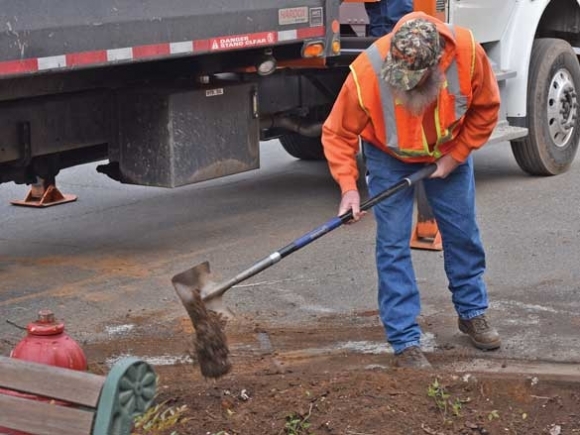 The streets of downtown Sylva are newly treeless after town crews excavated the red maples earlier this month, but the condition won’t last for long. A new set of trees — 15 Japanese zelkovas — has been ordered and will likely go in this week.

“We did do a lot of research on this, and I think it’s a great tree that the people will be happy with,” said Town Manager Paige Dowling.

The Japanese zelkova, with its attractive vase shape, showy fall display and drought-tolerant toughness, is a popular street tree in towns throughout the U.S. In fact, it shades the sidewalks of Main Street Waynesville.

But they are not native, and Jackson County horticulturist Adam Bigelow came by the Jan. 12 town board meeting to discuss that fact.

“Planting native plants that support native wildlife, food for birds, is one of the most important things we can do to help provide habitat for birds and small animals, especially as we increasingly turn what was once their habitat into parking lots and other non-beneficial habitats for them,” Bigelow said.

Non-native trees don’t attract the types of insect populations that native animals depend on for food, Bigelow said, meaning that birds nesting in them have to travel farther to find food.

“For the birds and for the many, many benefits of using native plants in a landscape, I advocate that we rethink the Japanese zelkova in favor of some native plants, including Dutch-elm resistant American elm varieties,” Bigelow said.

His comments found some support from Commissioner Greg McPherson, who suggested that the board consider adopting an ordinance saying that only native plants could be used in town landscaping.

Sheryl Rudd, owner of Heinzelmännchen Brewery, made a similar comment, asking that the town consider business visibility when replanting the trees.

“It is hard enough in Mill Street for people to see our businesses, and then with the trees it makes it even more difficult,” she said.

Dowling said that she understands the arguments in favor of native trees and that the town has been working to come up with a good, native replacement for the red maples since 2012, when it won a grant from the Appalachian Regional Commission to complete a streetscape plan.

“Several people contacted the town that said the maples were not a good choice because of what they did to infrastructure,” Dowling said.

The maples’ spreading roots were cracking sidewalks and seeking out water lines, Dowling said. The town knew that they’d need to be replaced.

So, as part of the streetscape planning process, a landscape architect visited the town and provided a list of approved landscape species — mostly native but also including some acceptable non-native species. The ultimate recommendation was to replace the red maples with a Japanese zelkova.

Sylva Public Works Director Dan Shaeffer followed that recommendation with more research, Dowling said. They needed a noninvasive tree with a large taproot that would grow to gather water deeper and deeper belowground rather than spreading out laterally to damage infrastructure.

The town used several guides to help in the decision-making process —  “Recommended Trees for Urban Landscapes: Proven Performers for Difficult Sites” and “Recommended Trees for Urban Landscapes” from N.C. Cooperative Extension; “Trees and Shrubs for Overhead Utility Easements” from Virginia Tech; and The Manual of Woody Landscape Plants by Michael Burstein.

“We asked several people if they could suggest a native species once the board last spring expressed they were interested in native species,” Dowling said. “A local arborist told us there wasn’t a native species with a taproot that would be the size that we wanted and low maintenance.”

They kept putting the question out, Dowling said, and kept getting Japanese zelkova as the answer. A query to neighboring Waynesville about the species’ performance yielded the reply that “it’s a great tree with minimal pruning. They have minimal sidewalk trouble after 30 years.”

So, Japanese zelkova it was.

The trees will go in this week and are expected to last for 20 to 30 years — street trees typically have shorter lifespans than other trees due to the high-stress environments where they must carve out a living.

The entire project will cost about $10,000 — $5,625 for the trees themselves plus the cost of equipment rental and hiring extra help — but the town won’t be stuck with the bill. Three Billboards Outside Ebbing, Missouri, the big-budget film that was made in Sylva last spring, is funding the project. Some of the town’s trees had to be cut down for the making of the movie, so money to replace the trees was part of the deal for filming.

“I hope that when they go in people will be very happy with them,” Dowling said. “It’s not native but it’s noninvasive and it’s attractive.”