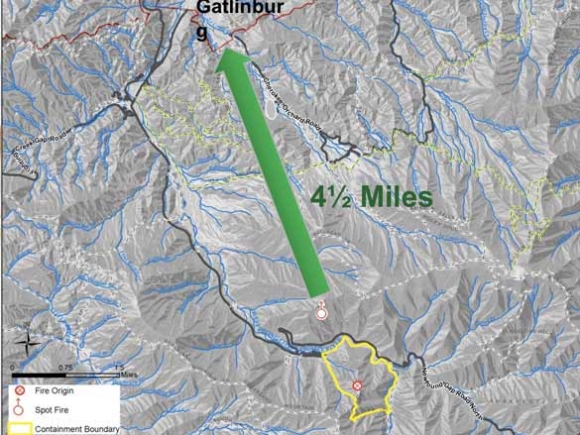 The smoke has cleared from the Chimney Tops 2 Fire, which escaped the Great Smoky Mountains National Park Nov. 28 to cover more than 17,000 acres and result in 14 deaths, but park officials are just beginning the daunting task of dealing with the aftermath.

While only about 2 percent of the 816-square-mile park was affected by the flames, the windstorm that fanned the fire to such devastating strength covered the entire park, resulting in downed trees and safety concerns throughout. The main road through the park, U.S. 441, was closed from Nov. 28 through Dec. 9, and even when the park reopened 20 trails stayed closed.

Inspecting miles and miles of backcountry trail in the wintertime is no easy task, and complete information as to the status of affected trails is not yet available. Assessments are also continuing as to how the fires could impact populations of fish, wildlife and plants.

Here’s what officials do know:

•The mass of firefighters that initially responded to the blaze have gone, with the U.S. Forest Service’s Southern Area Red Team transferring management to the park on Thursday, Dec. 15. According to park spokeswoman Dana Soehn, there are still some smoldering, smoking spots within the fire perimeter, but the area is almost completely contained. High winds swept through the area once more on Saturday, Dec. 17, but recent rains had wet the area enough to prevent the gusts from resurrecting the fire.

The conditions of individual trails have not yet been assessed, but some of the harder-hit ones — Chimney Tops, Bull Head and Sugarland Mountain — could be closed for quite some time.

“Anything in the Roaring Forks area is still closed right now, and to be honest with you we don’t know when it will open,” Ranger Brad Free said in a video posted on the park’s Facebook page. “A lot of this won’t happen until the first of the year. When you get ready to make your plans for spring break, contact us and we’ll probably have a lot of these trails open by that time.”

However, Free said, trails on the North Carolina side of the park, as well as in the Cosby and Greenbrier areas, are open and untouched by fire.

•No park structures were damaged by flames, though some guardrails did need to be replaced and high winds caused a tree to fall on a bathroom facility in the Elkmont area, Soehn said.

In some instances, that positive outcome proved hard to believe. For example, Free said, it’s extraordinary that the Noah Bud Ogle cabin near Gatlinburg survived.

“It’s amazing,” he said. “The fire burned all around this 100-year-old structure, didn’t even touch it.”

•Some animals perished in the fire, but the fire is not expected to have an impact on overall populations.

“A lot of these animals are smart. When the fire was coming in, they moved out to safer ground, for sure,” Free said. “The neatest thing about all this is they’re coming back. A lot of the turkeys, bears, squirrels are coming back and looking for food after this fire. It wasn’t a really hot fire in the valleys so the food is there for them.”

There has been an increase in bear activity in the Wears Valley, Cades Cove and Greenbrier areas, he said, likely a result of displaced bears foraging in these unburned areas.

One Facebook user asked whether the famous synchronous fireflies of Elkmont would face any fire-related adversity, to which the park responded that, “The fires did not burn through the Elkmont area. The firefly larva (sic) are safely overwintering beneath the soil.”

•The public can help the park figure out how the fire might have impacted plant and animal distributions using the iNaturalist app. The app allows users to record sightings and observations, which scientists can then use in their research.

•Despite the recent rains, a fire ban is still in place in the Smokies. No campfires, grills, wood fires or charcoal fires may be used anywhere in the park, including in established frontcountry campsites. However, gas camp stoves are allowed at designated park campsites.

The park is the last entity in Western North Carolina to maintain a fire ban following the drought and subsequent fire season. Burn bans have been lifted in the Pisgah and Nantahala national forests, the Blue Ridge Parkway, N.C. State Parks and individual counties.