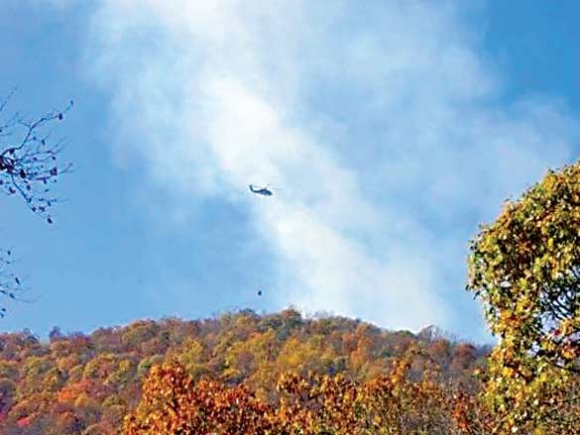 Fire season is just beginning, but already five fires are lighting up the Nantahala National Forest. About 130 people are busy battling the blazes, with crews coming from as far as Alaska to help with the firefighting efforts.

“Of the crews we have on these fires already, we have some of them designated each day for initial attack,” said Deanna Younger, public information officer for the U.S. Forest Service. “If there are new starts, it’s already planned these people will go address the new starts. That’s all included in the briefing each morning.”

The fires range in size from 11 to 374 acres, with the affected areas totaling 743 acres. Rather than running separate operations for each blaze, firefighting efforts in the Nantahala are now being handled jointly, with all resources shared between the five operations.

“We’re getting a pretty good handle on most of them,” Younger said. “They’re not contained. We’re basically just strengthening lines.”

So far, the fires appear to be sticking mostly to the forest floor and understory, with few to no torching trees or high flames, Younger said.

The causes of the fires are under investigation. As of Wednesday, Oct. 26, the Forest Service had spent $220,000 on firefighting efforts at Dicks Creek, with figures for firefighting efforts since then not yet available. No structures have been damaged or are in immediate danger.

Boteler Peak Fire. The fire started Tuesday, Oct. 25, on remote Boteler Peak east of Murphy, with the acreage increasing from 2 acres Oct. 29 to 40 acres Oct. 30 to 225 acres Oct. 31. As of Monday, steep terrain and lack of access had relegated crews to fighting the fire through air attacks only, the two helicopters assigned to the fire dumping water on the flames. There was lightning in the area recently that could have started the fire, or it could have been caused by a careless camper.

Jones Gap Fire. The fire, which is expected to grow to about 100 acres, started Saturday, Oct. 29, near the Bartram Trail northwest of Highlands. Helicopters were used to reduce fire intensity, allowing hand crews and a dozer to quickly construct containment lines around the fire, though a continuous cliff line that runs through the area creates a challenge. The U.S. Forest Service is in unified command with the N.C. Forest Service.  The Cliffside Day Use Area between Highlands and Franklin is closed to allow helicopters to dip water from the lake. The Bartram Trail is also closed from Hickory Knoll Road to N.C. 106 due to fire activity.

Dicks Creek Fire. The fire, which burned 374 acres, started Oct. 23 northwest of Sylva. It is now 80 percent contained with patrol and monitoring continuing along containment lines.