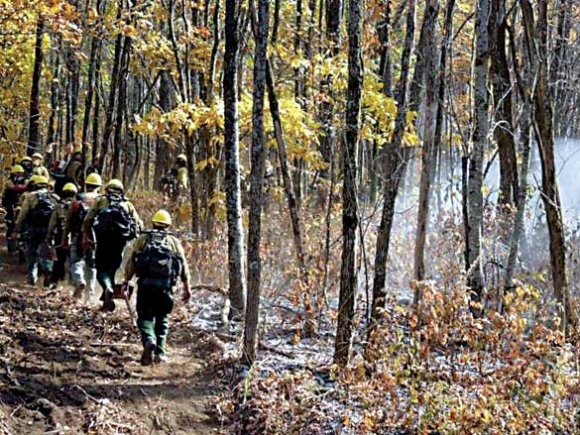 Nantahala District Ranger Mike Wilkins was headed to church Sunday morning, Oct. 23, when he got the call. A forest fire had ignited the Dicks Creek area of the Nantahala National Forest, near Sylva. Fire Management Officer Greg Brooks was already on the scene, and the response had to start ASAP.

“I was walking out the door, literally on the porch,” Wilkins said. He turned himself around, changed out of his Sunday best and drove out to meet Brooks, sizing up the challenge set before them.

It hadn’t rained in weeks, and the mountains had sunk into drought. The fire blazed atop a ridge top guarded by rugged terrain — steep slopes and jungles of laurel and rhododendron often forced crews to crawl rather than walk.

By Monday, the blaze had grown to somewhere between 200 and 250 acres, but it continued to swell. Tuesday, the number was 374, about half on private land and half on national forest land. But that’s where it stopped. Now, the fire is 80 percent contained with crews sticking around to make sure it doesn’t reignite and put out any spot fires that may flare up.

“To me, coming in from Arkansas, I was really impressed by the personnel,” said Deanna Younger, a public information officer for the Forest Service who specializes managing communications for larger incidents. She’s typically stationed in Arkansas’ Washita National Forest.

“It’s a seamless operation,” Younger added. “Everyone works so well together. That was a huge contribution to success.”

By Thursday afternoon, the flames and the billowing smoke that had choked the valley where Sylva lies had mostly vanished. Driving along Dicks Creek Road, the cool October air was mostly clear, though the scent of campfire still lingered. On the east side of the road, much of the ground was blackened, white ash sprinkling it while the curled leaves of desperately dry rhododendrons hung above. Newly fallen leaves drifted down to the charred forest floor, offering the possibility of a flare-up should any embers remain. Here and there, a larger tree with a slash of black through its base was tied with a bright orange ribbon, indicating that it was destined for a chainsaw.

Trees like that are hazards, in danger of falling at any time as their burned-up roots come loose in the soil. You can hear them, during a fire, crashing to the ground as their structures fail.

Luckily, no buildings were among the fire’s casualties, though the blaze at times came frighteningly close. Just feet from the white-painted walls of Dicks Creek Baptist Church, the mosaic of a fall forest floor turned to black, the char climbing the slope until it disappeared over the ridge. The same was true for the neighboring homes — flames had come way too close for comfort to log cabin walls.

The flames closest to the structures hadn’t actually been part of the wildfire itself, however. They were part of a backburn, a technique firefighters use to deprive the wildfire of fuel for its forward march. The approach involves clearing away brush and then lighting a low-impact fire that’s herded toward the bigger wildfire.

“It will go toward the other fire and then when the two meet the big fire sort of sucks the little fire into it and it stops right there,” Younger said. “It’s really amazing how the logistics of fire work.”

The fire under control, some semblance of normalcy had returned to the community along Dicks Creek Road by Thursday afternoon. Homeowners who had left for a night or two to escape the smoke were back in their houses. Marjorie Waller, who lives in the area, stopped to chat while out walking her dog Sophie. In her 30 years living there, she said, she’d never seen anything like the fire that came so near to her neighborhood.

“That morning I got up and looked out my back window and I thought, ‘Who in the world would start a fire this time of morning?’” Waller said. “I heard a big truck because I heard the beep-beep backing up and I guess that must have been one of the fire trucks or somebody going up, checking things, but I didn’t know that. And later I looked down and the whole side below you had a big puff, so we knew then when you started smelling smoke.”

The smoke was terrible, Waller said, the nearness of the fire downright spooky. But the firefighters seemed confident enough that they’d be able to stop it, and she was able to keep calm. Mostly, she was worried about the impact the fire might have on her grandson’s wedding plans. They’d been planning to get married at Waller’s home the next week.

“The bride is in Florida, and she kept saying, I’m going to be a charred bride,” Waller said.

The odds of that now seem low. Waller’s looking forward to a beautiful wedding.

A hard job to do

By Monday the Forest Service had downgraded the Dicks Creek Fire to a patrol and monitor status, with crews hanging around to check on the affected area, make sure no new flames crop up.

But it took a lot of work to get to that point — 76 people were involved in firefighting and containment efforts. The first crews arrived Sunday, soon after the blaze was discovered.

One of the most common techniques for controlling a wildfire is building containment lines — lines around the wildfire where fuels are cleared out to prevent the fire from traveling any further. But the terrain of the Dicks Creek area is rough and rugged. There were some places bulldozers couldn’t reach, meaning crews had to clear away trees and brush by hand.

“This is our third day on the fire — Monday, Tuesday, Wednesday — this is our fourth day,” said Randall Fortney of the N.C. Forest Service’s Bridge Crew, displaying just how easy it is to lose track of time when you’re working such long, intense hours.

Crews typically arrive to headquarters at 8 a.m., where they receive their orders for the day, grab a hearty sack lunch and leave to carry out their orders. They’re there all day, sometimes through dark, filling their hours with the hard, manual labor necessary to control a wildfire. When they finally return to headquarters about 6 p.m., there’s food waiting — usually ordered from some local business — and they grab a plate, a seat on the ground and wolf it down. Fighting a fire can produce an appetite to rival that of an Olympic swimmer.

“We got out here Monday and it was real smoky,” Fortney said. “We didn’t have a lot of people here to help us at first, but as soon as people started getting here it went really good. It’s just really dry. Everything up there was really dry. That just lets you know the fire season is going to be pretty crazy.”

He’s right about that. So far, five fires — including the Dicks Creek Fire — are active in the Nantahala National Forest. All of Western North Carolina is in drought, with the drought classified as extreme in Cherokee County, Clay County and the southern portions of Macon, Jackson and Transylvania counties. The remainder of the region is in severe drought.

So far, burning has mostly just been sweeping through the understory rather than torching the trees themselves. Understory fires are easier to handle than blazes that jump from treetop to treetop, but Brooks emphasized that the dry weather and the heat and the wind have led to some “extreme fire behavior.” Nevertheless, it’s unlikely that the fires will result in large swaths of newly open land. For the most part, Wilkins said, things in the burn area will return to normal when growing season returns — though people should keep their eyes peeled for holes created by burned-out tree stumps when recreating.

“Come springtime and leaves come up,” Brooks said, “It will look like a regular forested hillside to most people.”

Historically high fire danger with little chance of rain in the forecast has prompted the Pisgah and Nantahala national forests to implement fire restrictions.

Until further notice, building, maintaining, attending or using a fire, campfire or stove fire is not allowed in the national forest. Violating the rules could result in a maximum penalty of $5,000 and six months in prison. In addition, people found to have caused a forest fire could find themselves responsible for firefighting costs, which can run into the hundreds of thousands.

During the fire ban, fires are allowed only in the metal fire rings and grills provided in national forest campgrounds where a fee is paid. Charcoal fires are not allowed. However, portable lanterns, stoves and heating equipment that use gas or pressurized liquid fuel are allowed.

While fire restrictions apply only to the Pisgah and Nantahala national forests, anyone using fire in Western North Carolina — for anything from a bonfire to a cigarette — should use extreme caution while dry conditions persist.

• If at all possible, refrain from burning debris until conditions moisten.

• Start campfires only inside existing fire rings with a 10-foot radius free of flammable materials. Ensure that all flames and embers are completely out before leaving the site.

• Always have a phone, hose, bucket, steel rake and shovel on hand before burning.

• When burning vegetation, place it in a cleared area contained in a screened receptacle away from overhead branches and wires. When burning agricultural residue, ensure large fields are separated into small plots.

• Stay with any fire until it is completely out, embers and all. Do not use any flammable liquids to speed burning.

• Burn debris only with a proper permit from the N.C. Forest Service.

Drone use has been increasing in popularity recently, but the hobby is illegal where firefighting efforts are underway.

“If we see a drone we got to shut down,” said Mike Wilkins, district ranger for the Nantahala Ranger District. “It’s not only impeding our operations, it’s keeping us from protecting life and property.”

The law requires that drone operators maintain a visual line of sight with their aircraft, and the heavy smoke emanating from wildfires makes this impossible. In addition, collisions between drones and helicopters are dangerous — they can result in death for the helicopter operator. Therefore, aircraft are required to land when a drone is spotted in the area, and such delays can prove disastrous for firefighting efforts.