Greenway use rising in Jackson County 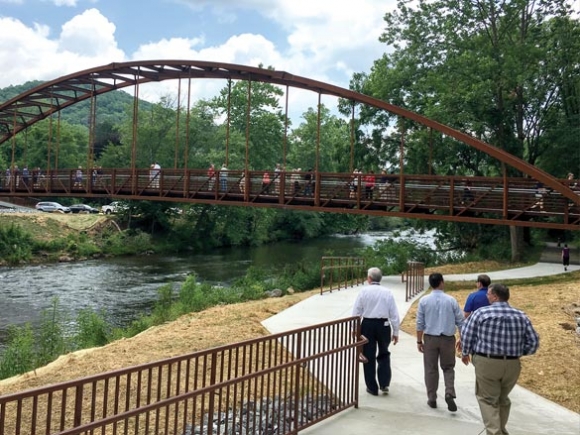 The greenway in Jackson County has now been fully open for a month, and use is skyrocketing on the one-mile path along the Tuckasegee River in Cullowhee. From May to July, monthly use more than doubled to 5,485 visitors — that figure is more than five times the 1,034 people who used the greenway in November 2015, the first month data was taken.

While the path has been open for a while, it’s only this summer that completion of a pedestrian bridge has allowed access at both ends of the greenway.

It’s possible that the numbers are slightly inflated, as they’re generated by counters placed at either end of the greenway — there’s potential for visitors to be counted twice. However, Baker said, the counters are strategically placed off of the paved area, designed to catch people as they’re traveling between greenway and parking lot and leave out people who are simply looping back to their car after walking the entire length.

The greenway project was originally projected to cost $1.1 million when it was approved in 2013, with $435,000 paid through a grant from the N.C. Parks and Recreation Trust Fund and the remainder of the bill footed by the county. However, the cost ballooned when the most costly portion of the greenway project — a $640,000 pedestrian bridge that would allow access to the greenway from Locust Creek — inflated to a final cost of $1.3 million. The increased cost was due to discovery of unstable soil where the bridge footings had to go and the presence of sewer line access points for the Tuckaseigee Water and Sewer Authority.

Commissioners are glad to see the project completed and the community jumping at the chance to use the new resource in their backyard. Earlier this month, the county hosted a well-attended greenway walk that celebrated the National Park Service’s centennial year.

“Every time you pass by the Locust Creek access area you see plenty of cars,” Baker, who lives in the area, told commissioners.

As use has increased with the opening of the bridge and coming of summer, however, a rash of car break-ins at trailheads and other recreation areas in Jackson County has followed. For that reason, the county and sheriff’s office are installing security cameras at recreation areas countywide to discourage thieves.

“It’s an ongoing investigation,” said Sheriff Chip Hall. “We’re going to bring some closure to it.”

Thus far, the county has spent $42,045 on security cameras for its recreation areas, with cameras yet to be purchased for several more — prices have not yet been pinned down for those purchases. The cameras come with software that allows county staff to view the footage remotely, making it easier to keep an eye on things after hours.