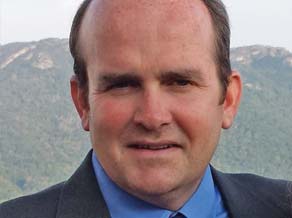 Don Adams, who’s served as the county manager of Alleghany County for 19 years, not only brings a wealth of experience but will also be a good cultural fit for Jackson County, according to commissioners.

“He is a seasoned manager. He walks into the job with a lot of experience. He is in position to start the job on day one,” Commissioner Chairman Brian McMahan said.

Commissioner Vicki Greene said Adams has obviously been doing something right to remain a county manager in one place for so long given the political nature and potential volatility of the job.

“The average life expectancy of a town or county manager is five to seven years,” Greene said. “He has been in one county for 19 years and worked with 22 commissioners over that time. How one does that I would never know.”

Adams, however, was humble about the experience he brings to the table. He said a county manager’s success is contingent on partnerships and working relationships with department heads and community organizations, rather than his individual talents.

“I am hesitant to say ‘Yes absolutely, I have handled this and I have handled that,’” Adams said when asked about his long tenure in Alleghany. “I am very cognizant of the relationship and partnerships I want to build.”

His natural instinct to deflect personal accolades is consistent with his management philosophy that centers on buy-in and communication.

“To accomplish goals or tasks or objectives, it takes buy-in and partnerships from the people being impacted by it and the people implementing it,” Adams said. “It’s what surpasses everything, what makes an initiative last this year and next year and 10 years from now.”

Adams wife, Stacy, is an attorney. They have a son going into the eighth grade. Adams and his family enjoy outdoor recreation, which made Jackson County particularly appealing.

“The outdoor amenities, whether it be on the river, skiing or fishing, were all important to me,” said Adams, whose wife is also a horse back rider.

McMahan said Adams appreciation for outdoor recreation was a plus, given its economic importance to Jackson County — as a quality of life factor for residents, a draw for attracting new businesses and an important tourism driver.

On a personal level, Adams, who went to college at Appalachian State University, said it was important to his family to stay in the mountains. But on a professional level, Adams said he was ready for more of a challenge by making a move to a bigger county. Jackson has four times the population and a far more diverse economy than Alleghany, a rural county outside of Boone.

However, coming from a smaller county like Alleghany means Adams has been intimately involved with every aspect of county government, even doubling as the human resources manager there.

“He has a great deal of working knowledge that someone coming from a larger county would not necessarily have,” Greene said. “I would consider it a plus.”

Adams was selected from a pool of 29 applicants. Commissioners brought in four finalists for an interview and role-playing scenario. The finalists were asked to deliver an oral presentation and PowerPoint, as well as written report, on how they would go about developing a strategic plan for the county, with an emphasis on economic development.

Adams stood out as someone who would bring stakeholders together.

“I think he will do a lot of listening and engage people,” Greene said. “His style is low key, not a know-it-all.”

Adams seemed to genuinely enjoy the question that was thrown at him for the job interview, since strategic planning plays right into his own management values.

“It is about the input and the process and the collaboration to get to the end goal,” Adams said. “At the end of the day, if you do it appropriately, you have the right buy-in and the right commitment and right partnerships to actually get something done.”

Outgoing County Manager Chuck Wooten is retiring at the end of June. Adams, who was offered an annual salary of $125,000, starts a month later on Aug. 1. Greene said they don’t plan to bring anyone in from the outside to serve as interim manager during the month of lag time, but will name an existing department head to serve in an acting role.